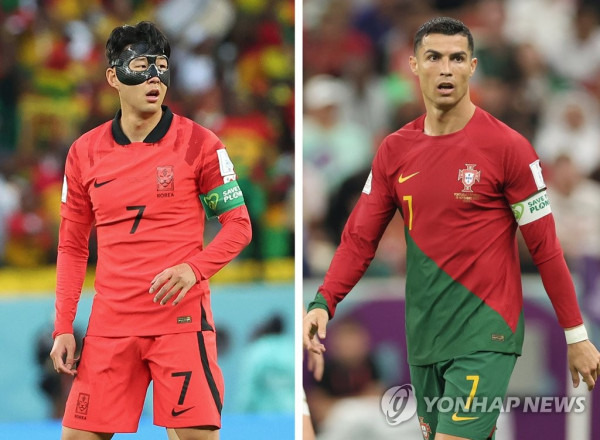 When South Korea and Portugal square off in their final group stage match of the ongoing FIFA World Cup on Friday, there will be a battle within a battle: the clash of the two titans between South Korean captain Son Heung-min and his Portuguese counterpart Cristiano Ronaldo.

Kickoff for this Group H contest is 6 p.m. Friday at Education City Stadium in Al Rayyan, west of Doha, or midnight Saturday in South Korea.

They both wear No. 7 and both have won the Golden Boot as the scoring champion in the Premier League, with Ronaldo having done so with Manchester United in the 2007-2008 season and Son following in that path for Tottenham Hotspur in the 2021-2022 campaign.

The 2022 KBS Song Festival has revealed its lineup of performing artists!

Meanwhile, IVE’s Jang Won Young, Na In Woo, and Kim Shin Young were previously confirmed to be hosting the program together as its three MCs.

From the Mullae-dong that he loves, to Gwanghwamun which was renewed this August, and even Anguk that MINO visited often! MINO toured around Seoul thoroughly, right?

Gentle charms that MINO spilled here and there, people who want to go on a Seoul tour to look for them, put your hands up~🙋‍♀🙋‍♂

Just 7 easy tips to help you spot a K-drama chaebol from miles away—although let’s be honest, they’ll probably just tell you themselves 😛

Production is underway on Lee Soo Man: The King of K-Pop, a feature documentary from production company This Machine that will land on Prime Video.

Filmmaker Ting Poo, who earned acclaim with her 2021 Prime Video documentary Val about actor Val Kilmer (co-directed with Leo Scott) is helming Lee Soo Man, a “documentary chronicling the enthralling life of a bold visionary whose work put his country on the map, sparked a global movement, and continues to define an era,” as a release put it. “A futurist and visionary on the scale of Steve Jobs, Lee is more than a music impresario. He is a world-builder and a technologist whose original creation has taken over global entertainment, one K-Pop band at a time.”

No target release date has been announced, but once finished the film will reach audiences through Prime Video in 240 countries and territories worldwide.