"Girls' Generation just set the bar truly high for pop in 2013" Billboard's "I Got a Boy" Review. 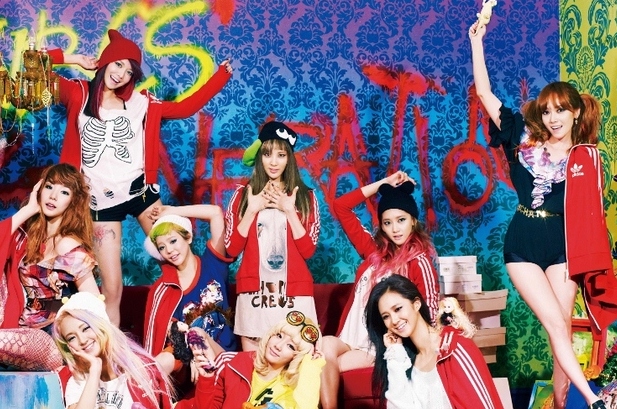 Girls' Generation are rightfully one of the acts at the forefront of K-pop's international advancement th their immense popularity in Korea allowing them to spend 2012 focused on other environs, namely Japan and the U.S.

Such a long time away from the scene could prove disastrous for any act in the constantly mutating K-pop world, with acts' popularity dependent on a constant stream of top-notch singles. Yet orea has proven the love for Girls' Generation (known as SNSD) is strong even without the ninesome promoting domestically together Their massively dedicated fanbase (named Sones) has kept them one of the top-tier groups in Kore as exhibited when sub-unit Girls' Generation TTS not only made history on the Billboard 200, but also found success on the competitive Korean music programs.

"I Got A Boy," their fourth full-length album, is a confident return home with polished K-pop confections that combine elements of foward-thinking EDM, classic and modern R&B, 80s new wave, and more. It should more than satisfy not only K-pop fans but also listeners of all types of popular music.

See what the ninesome has to offer this time with their first domestic release in fourteen months.

The girls' first Korean single since 2011 needed to be one that caught everyone's attention. boy s it."I Got A Boy" is not one sound polished and packaged for popular consumption (like past singles), but five completely different sounds stuffed for widespread music consumption. he track is created from: minimal drum and bass, funky and clunky electronic production, hyper hipster dubstep, dramatic vocal showcase sections, and what sounds like a xylophon Sounds messy? Somehow it isn't with the sounds constantly playing off and evolving with each other, complimenting the girls' knack harmonies, to create one of the most-forward thinking lead pop singles heard in any country. With this title track, Girls' Generation just set the bar truly high for pop in 2013.

"Dancing Queen" was considered for a Girls' Generation single years ago, nearly replacing their now iconic K-pop smash "Gee" (which at one point was the most-watched K-pop music video on YouTube pre-"Gangnam Style"). This remake of Duffy's "Mercy" acted as a pre-release to the new album with the track debuting at No. 4 (now at No. 2) on the K-Pop Hot 10 not many groups could take a five-year old leftover and land a hit. But releasing this nostalgic, cutesy K-pop track worked nicely as a precursor to throw off the confident sounds of "I Got A Boy." l played, SNSD.

This harp-centered mid-tempo should end up being a Sone favorite. e can imagine the girls and fans grooving along with their layered harmonies on the chorus with the fanbase undoubtedly following the hook's commandment to "put your hands up if you feel like this." While the song's lyrics actually tell the story of disbelief that one is in lov one can imagine Sones relating the affection towards the nine singers and really showing their love when this is performed in concert. The a cappella/clap section at the end seals the sentiment with a sample of an audience giving a huge applause.

An aggressive, grinding electronic beat kicks off this track before leading into the sexy and sweet chorus that recalls a funky 90s pop styling. irst listen, "Talk" is somewhat unremarkable, but ultimately the "Let's talk talk about, talk talk about it boy" hook is an undeniable earwo Another enjoyable slice of electronic-pop from the ladi Fans of this track can find a Japanese version on their second album in the country with the title "boomerang"

"Promise" is a catchy ballad with a nice 90s R&B groove that will probably bore the heck out of non-Korean speaking listeners. ould they take the time to translate the lyrics, listeners would find lines both serious (about an indescribable pain through their body) and cute (a pinky swear "promise to you" The girls sound great on the chorus together, but the composition falls short compared to their too similar-sounding Japanese ballad single "All My Love Is For You".

If Girls' Generation played their comeback single safe with a mainstream morsel of K-pop, "Express 999" would have been an appropriate choice. he track is composed of a sporadic electronic beat with strong 80s new wave influences with its highlight in the synthesizer-heavy build-up that sounds like Skrillex stuck on an 80s kick A standout on first listen.

Drake and Kelly Rowland have crafted R&B smashes with their minimalist R&B productions courtesy of the likes of Noah "40" Shebib and Jim Jonsin. Girls' Generation take the same slant but add in a piano and synthy backing to give it balance of mainstream pop with that modern R&B. The result is the most interesting ballad on the album, though not as catchy as "Baby Maybe" nor "Promise."Leader Taeyon's impressive vocals particularly shine on this track.

"Look At Me" is the most-urban leaning of the tracks, kicking off with a tribal beat that sounds like a Bangladesh creation. t takes listeners on a sonic ride jumping from aggressive rapping to an energetic, catchy chorus. he track recall the same noncomformity similar to their quirky Japanese single "Flower Power".

Right away the listener is drawn in to th electro-rock production hat could pass as a modern update to Marylin Manson's "The Beautiful People." The metaphor of saying their love is far away like points "ABC" to "XYZ" is a little far fetched, but it makes for a ute rhyme said to be written by members Yuri and Seohyun. With a typical song structure, it's another futuristic, pop offering that could have been a successful, but safe, comeback single.

Fans were undoubtedly thrown off when thi swing-inspired track as used in one of the music video teasers for "I Got A Boy". It didn't sound like any other Girls' Generation single, but does fit nicely on the girls. ike "Dancing Queen," the album's closer has an old school feel, but this shows a much softer side of the nine. With lighter vocals and production, it sounds like a Korean version of "Singin' In The Rain." A nice end to the album that shows listeners that Girls' Generation can shock and delight with their ability to successfully tackle an array of genres no matter how many they try to fit in a song.