Eunhyuk gets flak for his latest joke on Strong Heart 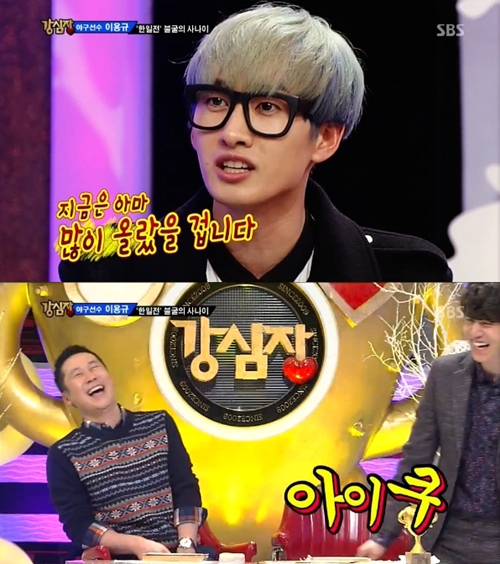 Another guest on Strong Heart was talking about his search ranking for some event in 2009 and Eunhyuk chimed in to add, "My rank was #235 at the time. Although now, I'm sure it's gotten up much more." The MCs asked, "I wonder why?"

4. [+85, -44] I'm a girl and his comment really turned me off. Does he not know how much pain IU is going through right now because of what happened? And he thinks to use it as laughing matter on a variety show? I feel sad for IU

8. [+60, -7] So trashy... You really had nothing else to say other than that? You should've just kept your mouth shut, instead you turned yourself into trash... Wow, seriously..

10. [+48, -3] He really doesn't get the situation, does he? He's nothing but a speck in IU's life because he could never amount to what IU had career wise before what happened. He talks as if IU was the one hanging on to him. It's pathetic that IU was even once with trash like him. At least IU has talent, Eunhyuk is old and can't even sing to save his life. Trash without a speck of respect for women.

Here is a translation of the original article from AKP. Thank you

Eunhyuk had viewers as well as the other stars on set laughing as he subtly brought up his previous photo incident in a light-hearted way.

On ‘Strong Heart‘ that was aired on the 15th, baseball playe Lee Yong Kyu discussed the attention he received during the 2009 World Baseball Classic in the Korea-Japan match. Lee Yong Kyu was hit on the head by the ball thrown at him by the opposing team’s pitcher and the news made headlines left and right.

Eunhyuk commented, “From March 5th, 2009 to the 24th during the WBC, Lee Yong Kyu was searched more than 1,950,000 times on portal sites. It’s exponentially more than Lee Min Ho‘s, whose drama ‘Boys Over Flowers‘ was ranked #1 in terms of ratings during the time.”

He then added, “My search ranking used to be 235th place… But now, it’s probably gone up a lot,” hinting at his photo incident in a subtle manner. The studio was brought to laughter as Eunhyuk good-naturedly joked about it, and MC Shin Dong Yup could not help but tease as he feigned innocence as he asked him to explain, commenting, ”Just why did it go up?” causing everyone to chuckle again.