Because of sasaengs, Changmin's scared of taxis and school uniforms 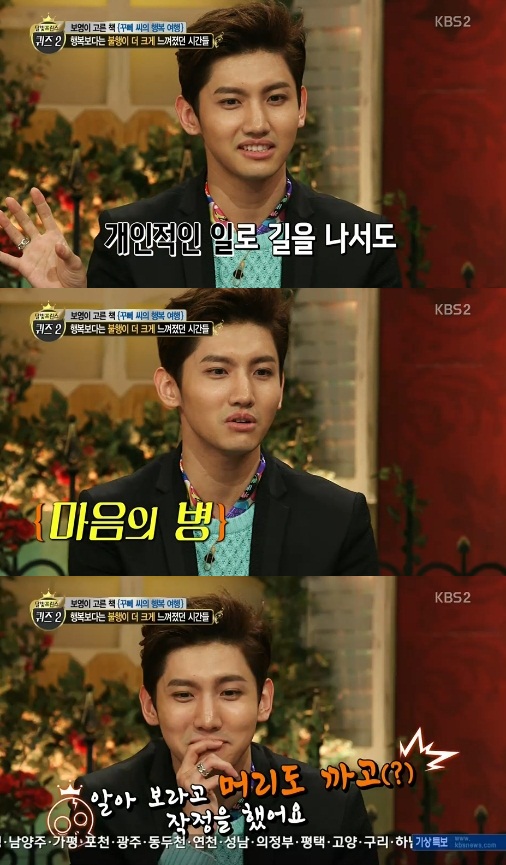 Sasaeng fans have traumatized a number of idols, and TVXQ’s Changmin was one of them. So much so that apparently he needed to seek help through therapy. In the February 5 broadcast of KBS2′s Moonlight Prince, the panels and guest Lee Bo Young started talking about their own joys and sorrows while speaking of the book Hector′s Voyage or the Search for Happiness by François Lelord.

When MC Kang Ho Dong commented to Changmin, "You probably won′t have time to be unhappy thanks to your busy schedule and popularity," he said, "I used to think I was unhappy. There were fans who chased me around in taxis whenever I went out. From then I always started to feel uneasy whenever I saw taxis. I started thinking, ′Is that a fan? Should I get out to check?′ I became nervous."

He explained that TVXQ’s popularity because a huge burden and said, "I got nervous when I see even one (sasaeng). When I was walking in the streets, of course there were students in uniforms walking too. But when I saw them, I found myself walking with my head bowed to cover my face, touching my phone. I didn’t think I was lucky. I thought I had earned as much unhappiness as happiness."

Because of this, he ended up seeking help, stating, “I received a light consultation. I think these days people are more easily hurt psychologically rather than physically," he said. "Wherever I went, I started to think people were watching me, and it felt like since I′m famous I should avoid meeting people. I just closed up after that."

And now, he says, “I”m enjoying every moment now. I’m happy.” He jokingly commented “I even flipped my hair back now so everyone will recognize me.”

Changmin bb! :( It's ridiculous how all 5 DBSK guys have had to deal with sasaengs since freaking 2004. I remember reading somewhere that Changmin infamously broke down crying in the middle of a sidewalk while he was surrounded by sasaengs who just kept taking his picture. :(