The Omona lovefest continues with a Finding Mr. Destiny giveaway courtesy of @5PointsPictures! 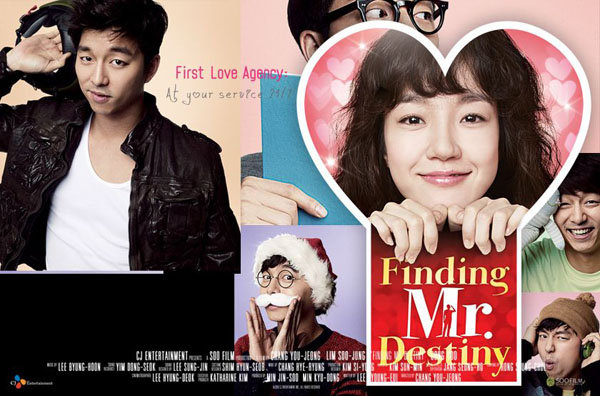 FINDING MR. DESTINY (2010)
Directed by Chang You-jeong
Starring: Gong Yoo (One of Omona's faves), Lim Soo Jung (I'm A Cyborg But That's OK)
Synopsis: Ji woo (Lim Soo Jung) reluctantly finds her first love with Gi Joon (Gong Yoo) who opens up a First Love Agency after he gets fired from his job so that her dad gets off her case about not getting married. Lighthearted hilarity ensues!
The rules are simple. I'll be posting a review and comment with your thoughts, related  etc for a chance to receive (1) grand prize pack: A copy of Finding Mr. Destiny on DVD + poster + postcard. There will be 3 runner up prizes: a poster and a postcard for each. Winners will be selected randomly.

Ji Woo (LSJ) is a director for a musical. Gi Joon (GY) got fired from a travel agency and instead built a "First Love Agency." Ji Woo rejected a proposal from a handsome pilot oppa she had been seeing. Her father is desperate and upset that she might never find love at this rate because she is still in love with a man she met one time in India, Kim Jong Wook. Even though Ji Woo is reluctant, she and Gi Joon begin their search. Well, why is she reluctant? Ji Woo firmly believes in fate and has a peculiar aversion to endings and this entire quest to find KJW goes against it. This film also explores the importance of first loves: should we really place an importance? Is your first love really your first love?

I went in thinking that this is going to be another movie with a flighty, delicate female lead and a dickhole male lead but I was pleasantly surprised. Ji Woo isn't your typical "save me from myself" character. While she has convictions, it doesn't cripple her to the point of being stubborn. The only other movie I saw with Lim Soo Jung was I'm A Cyborg But That's OK so it was lovely to see her as a woman with some baggage (don't we all???) without turning her into a helpless MPDG. And Gi Joon is... well if you've seen Gong Yoo in Coffee Prince and Big then he plays somewhat the same character but there is a bit of nuance here; he's a klutzy neat freak and is not your typical "strong" male perfect asshole oppa. What I'm saying here is that Gong Yoo is so fricking handsome and handles the character with grace and poise that he doesn't turn him into some kind of parody.

My only complaint about this movie is that in the flashback scenes, Kim Jong Wook was played by... Gong Yoo. It's such a glaring issue that I don't even mind spoiling that part so you don't go through the movie like I did, expecting a much different outcome. I guess my only explanation for it is that while Ji Woo tells Gi Joon of her travels in India with this handsome oppa he could only imagine himself since we don't know what KJW looks like, because he knows that we all know he thinks he's a handsome oppa[Spoiler alert:]he's right.

Finding Mr. Destiny is a really lighthearted movie that nearly melted my cold black heart. These two characters together and the relationship that develops was fun to watch and this movie doesn't take itself seriously, and that's always a plus for me if I'm going to be watching a romantic comedy.
I give it four and a half heartshaped lollipops out of five!