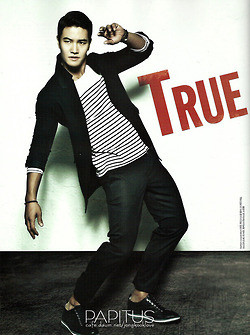 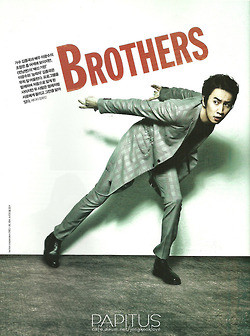 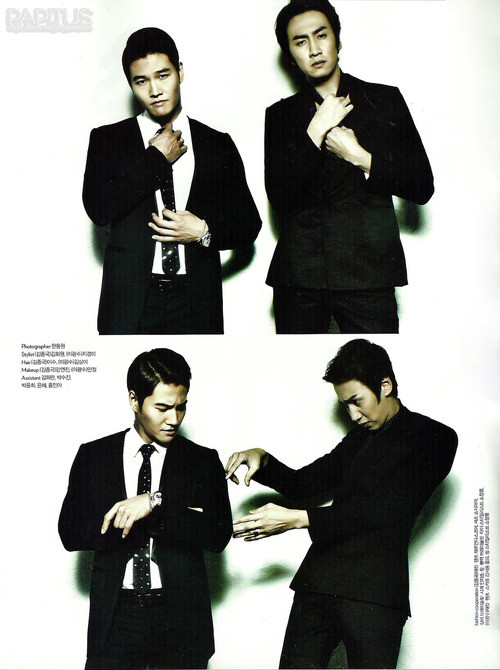 Everyone knows the predator-prey relationship of the ‘tiger’ and ’giraffe’of ‘Running Man‘, but just how close are the two in real life?

Kim Jong Kook and Lee Kwang Soo participated in a duet pictorial for ‘Cosmo Men‘, where they revealed their brotherly love, or bromance, extends off-screen even when not filming together.

Even though on-screen the two are always at each other’s throat, Lee Kwang Soo actually sees Kim Jong Kook as his most reliable hyung. He said, “Every time I met Kim Jong Kook for the past 3 years, I’ve never paid for our food. He’s a hyung who always takes care of even the smallest things. I trust him so much that to me, anything he says always seems right.”

His love wasn’t one-sided at all. Kim Jong Kook brought out his sentimental side as he spoke about hisdongseng, saying, “He’s the nicest and the most genuine and honest celebrity dongseng that I have ever met. If he has a good enough reason, I’m willing to even lend him hundreds of thousands of dollars.”

He is probably best known as ‘Sparta’ on the Korean variety programmeRunning Man now, but do you know Korean artiste Kim Jong Kook is actually a veteran singer who debuted as one-half of the duo Turbo back in 1995?

Kim Jong Kook shares some tidbits about himself which fans may not know of, during a 20-minute small group interview.

One might remember that Kim Jong Kook once participated in variety programme Family Outing with Big Bang member Daesung and the pair was then nicknamed the ‘Tiny Eyes Brothers’.

Having debuted as a singer for more than 10 years now, we wondered what some of his thoughts on the current idol groups are.

“Thanks to media exposure and technology, it’s very different then and now. I’m very proud of them because they’re doing so well and they’re very well-trained and well-prepared. They are ready to perform anytime,” he said.

Kim Jong Kook then named Big Bang and Super Junior as juniors he often take note of and added, “Big Bang is very popular in Singapore and they’re good in everything, including fashion. As for Super Junior, every member is unique in their own way. I think the groups these days are doing a superb job when it comes to showing their personalities.”

Kim Jong Kook shared that he first went onto to variety programmes because this was common for Korean singers and that it gave him another platform to meet his fans.

Having appeared on variety programmes including X-Man, Family Outing andRunning Man, the 37-year-old picked Running Man as his favourite, with X-Mancoming a close second.

Kim Jong Kook had mentioned during the press conference that Running Manhelped him gain a worldwide following.

“X-Man means a lot to me because it’s my first variety show and I had my first tastes of recognition through that programme.”

And to the variety newbies who aimed to carve out an equally successful career as Kim Jong Kook, the man advised, “Be hard-working and enthusiastic. With that, all other things would come naturally for them later on. Another important thing is, they need to know what the audience wants from them.”

So how much of him on TV is the real him?

Kim Jong Kook laughed and replied in English, “Very similar, and I’m really not that harsh Gwangsu (his cast mate on Running Man). I just make things a little more interesting and exaggerated on TV, so that it’s fun to watch.”

Despite having an image like Sparta on TV, Kim Jong Kook’s only weakness is women. He gave an embarrassed grin and let on that he had always been like that since young, it had never been easy for him when it comes to women.

“I think it’s common sense to be good to women. It goes against my values to be violent to them,” Kim Jong Kook said.

Kim Jong Kook surprised everyone during the press conference when he replied questions posed to him in fluent English.

With curiosity piqued, we asked if he had taken up lessons in school.

“No, no, no. My English is not that perfect. It’s enough for (me) to hang out with my friends, but not enough for interviews,” Kim Jong Kook replied in English humbly, and added, “I didn’t study a lot when I was in school. I learnt English from the streets. I have some friends in the US and when I was in Turbo, my partner was from the US, so I learnt English, although not proper, then.”

Sorry I probably made a bunch of mistakes since it is my first post, but we all could use some more Kookie in our lives~