"Park has yet to present evidence showing that the sex was consensual", a police spokesman said

More information about the Kakaotalk messages brought up by Park Shi Hoo's law firm and not by the police. 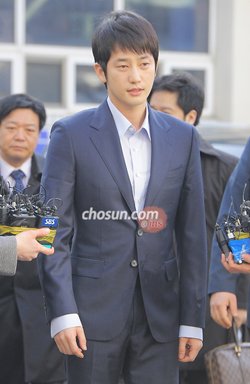 Actor Park Si-hoo arrives at the Nokbeon Police Station in western Seoul for questioning on Friday.

Police plan to summon actor Park Si-hoo for further questioning on charges that he raped a 22-year-old aspiring actress. "We did not set a specific time to summon him and the next round of questioning may take place privately as he wishes", a police spokesman said.

Park finally appeared for questioning on Friday accompanied by his attorney and was grilled for about nine hours. He had repeatedly failed to obey a summons in the previous two weeks.

On his way out of the police station afterwards, Park told throngs of reporters camped outside, "Although there is much for me to tell you, all I can say now is that I responded dutifully to the police summons and the truth will prevail".

A female friend of the aspiring actress apparently sent her a text message advising her to either "get a lot of money" from the actor or "bring him down".

Park's accuser allegedly responded, "I'm going to show them how well I can act by looking like the victim".

But police said they intend to use the Kakao Talk records merely as reference, and other messages actually support the accuser's claims. "Park has yet to present evidence showing that the sex was consensual", a police spokesman said.

Police have come under fire for shoddy investigation since it was revealed that they did not bother to check the text messages in the two weeks since the probe began. Only one week's worth of messages are saved on the Kakao Talk main server, and Park's lawyer, rather than the police, had sought a warrant to obtain the records.

So. We had all this media coverage about the police finding compromising Kakaotalk messages, completely ignoring the messages that confirm the lawsuit? And all that given by Park Shi Hoo's law firm? That the validity wasn't even confirmed by the police? I see, I see. Anyone has another article talking about it?