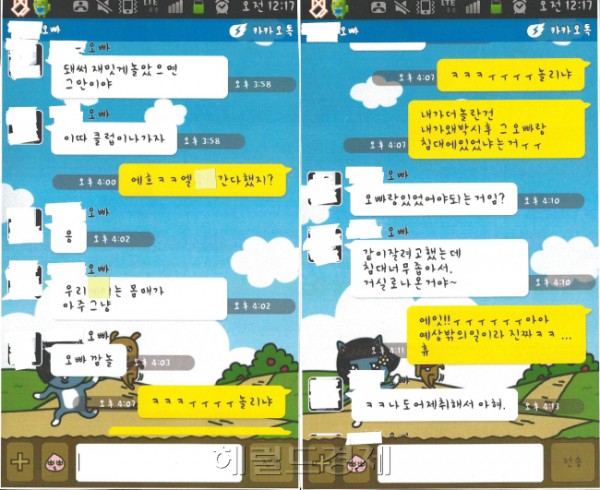 With Park Si Hoo‘s side now taking the offense by firing back with lawsuits of their own, trainee ‘A’ and her legal team have revealed the full KakaoTalk message history between ‘A’, and Park Si Hoo’shoobae, Mr, Kim (‘K’).

Feeling that only certain parts of the KakaoTalk history between her and Mr. Kim, the one who introduced her to Park Si Hoo, were unfairly revealed last week, ‘A’s legal team has now released more of the conversation that took place the day after the night of the alleged sexual assault. 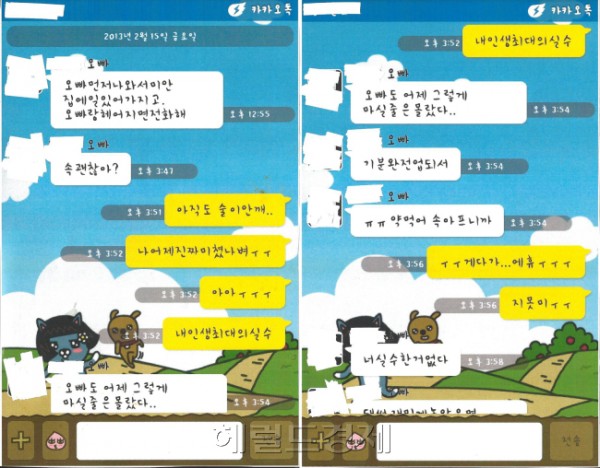 The KakaoTalk history reads as follows:

K (Mr. Kim): Sorry I had to leave earlier, I had stuff to take care of at home. Call me when you and oppa (Park Si Hoo) are done hanging out.

K: You feeling okay? (in reference to the night of drinking)

A: I think I was crazy yesterday ㅜㅜ

A: The biggest mistake of my life

K: I didn’t know we’d drink like that yesterday either..

K: I was totally caught up in the mood

A: Ji Mot Mi (an abbreviation for ‘Sorry I couldn’t protect you’) ㅜㅜ

K: You didn’t make any mistakes

K: It’s fine as long as you had fun

K: Your figure is totally

K: I was really surprised

A: Kekeke ㅜㅜㅜㅜ Are you making fun of me

A: The thing I was more surprised about was why I was on the bed with Park Si Hoo oppa ㅜㅜ

K: Then do you think you should have been with me?

K: I was going to sleep with you guys but the bed was too small, so I just came out into the living room

A: Darn!! ㅜㅜㅜㅜㅜㅜ Ah ah it was something totally unexpected keke… whew

K: keke I was drunk yesterday too.

K: You shouldn’t drink either, okay?

A: I usually don’t drink ㅜㅜ but I drank yesterday on purpose because of you!!!

By revealing the entirety of the conversation that took place after the night between herself and ‘K’, ‘A’ hopes to show that the alleged incident did not occur due to natural feelings that had developed between her and Park Si Hoo. ‘A’s reps countered Park Si Hoo’s sides argument, stating, “While playing a drinking game at the suggestion of Park Si Hoo and after drinking a couple of mixed drinks with soju, she lost consciousness. There was no time for them to develop feelings for one another.”

It also goes against what ‘K’ had stated earlier on in the investigations as he had said that he didn’t drink at the time.

Park Si Hoo’s former agency also directly denied having anything to do with this case after the news of Park Si Hoo and ‘K’ suing ‘A’ as well as her sunbae ‘B’ and the actor’s former agency’s CEO ‘C’, commenting, “Even after their contract ended, the CEO and Park Si Hoo decided to remain as acquaintances who could offer help to one another in times of need. So in order to do so, the CEO tried his best… Due to various assumptions and false rumors, it seems Park Si Hoo and his side’s misunderstanding has been growing, and led to this lawsuit. We feel very sad and regretful that it has come to this. The CEO will do all that he can, even if it means getting into a lawsuit with Park Si Hoo, to prove his innocence.“

The media's releasing all of thi is insane. Media play needs to stop. I don't know why A's law firm felt the need to reveal it, perhap's because the police investigation is heavily influenced by Shi Hoo's media play?  Even if they said they would'nt use it as proof.