[movie review + giveaway] PUNCH by YOO AH IN. We loved it! 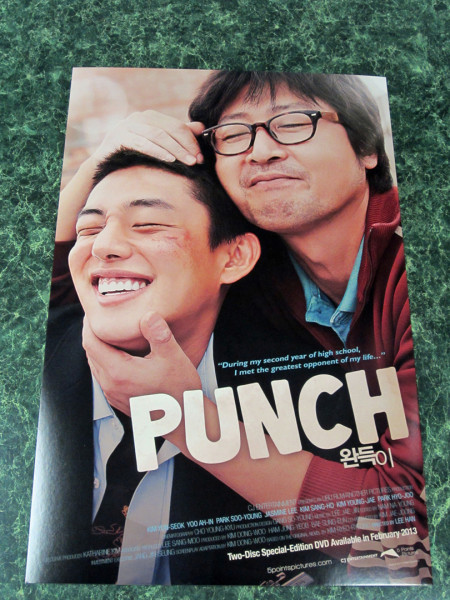 Since this is a movie giveaway the only rule really is: comment for a chance to win! Winners will be contacted through private message tomorrow so please turn this on.
First prize winner: Poster (like the one above) + DVD + POSTCARD
TWO Runner up prizes (as in two people will win the following): POSTER + POSTCARD

Here's my review. OVERALL I ENJOYED THIS MOVIE A LOT.

I've only seen Yoo Ah In in one other thing (Sungkyunkwan Scandal) and he was a tough, wisecracking kinda guy. In this one his name is Wang-deuk and it's good to see him balance a weary, sort of vulnerable high school kid who, if provoked, would beat the shit out of you. If it had been a different actor Wang-deuk would have just been this ~EDGY POOR KID WITH A HEART OF GOLD~ type, but his portrayal really draws you in to someone more complex. He's hot, also. Out of all the young actor dudes I've seen, he has a lot of natural talent. Rising star for sure!!! I think I have been converted to his holy light.

Homeroom teacher is Dong-ju (Kim Yun-Seok). He's an asshole-- the good kind though. He cares a lot about the people around him but he's a no-nonsense type of guy. He picks on Wang-deuk at first but he does that because he cares.

The acting here is superb. The cast really gels together, so you can't help but root for them. Not that they need your pity: these people are strong and they look out for each other. I'm not going to get into each character because it's quite a large cast but they are all part of a unit, a disjointed family.

And before I forget: the movie is called Punch because halfway into the movie he trains to be a kickboxer since he's got a bit of a thuggish exterior. Little does he know that fighting in the streets ≠ fighting in the ring. There's a growth metaphor thrown in there somewhere.

I'm not going to go into more detail since I'm afraid I might spill everything. There are a few social justice issues this movie goes into but they handled it with humanity and heart. One thing I love about Punch was how this movie shows how Koreans and other Asians live in working class conditions, something I've never seen before in a Korean movie. So it's a lot more gritty, sometimes sad, but definitely funny in some parts but I had a great time watching it.

My review, I also really, really loved this movie a lot. There's so many different themes and issues touched on that I haven't really seen in other Korean movies such as interracial marriage, being handicapped, living with a single dad, and living in the poorer end of the working class. They were all tied together and shown in such a great way that really pulled at your heartstrings. All the characters are real people with real struggles and it's great to see them work through them to create better lives not only for themselves, but others.. I'd like to say more but I feel like I'd be giving away the whole plot of the movie which, SURPRISE, isn't centered around the main character, Wan-deuk (Yoo Ah In), and his endeavor to become a kickboxer.

Speaking of Wan-deuk, Yoo Ah In totally stole this movie for me. I've seen most of the dramas and movies he's done (shhh shhh Fashion King didn't really happen, okay) and I think that by far, this is his best work. It's amazing the amount of effort and concentration he put into this role from the preparation (he dropped a bunch of weight and I swear, he looks even younger than he did in Antique and THAT'S SAYING SOMETHING) to look and act as a poor, 17 year old high school outcast with a tendency to get in fights. It sounds like the typical high school role, but again, it's hard to get into the details without spoiling the plot (HONESTLY JUST GO WATCH THIS MOVIE, SERIOUSLY. GO.) but YAI's acting is amazing and he plays Wan-deuk in such a way that you feel like you really know him and his life and his struggles. While I already love him, I feel like I've fallen in love with him even more after watching this.

Shout out to the other leading role, Dong-ju (Kim Yunseok) as well. He plays Wandeuk's tough-as-nails teacher than lives across the street and basically acts as Wandeuk's guardian angel when his dad isn't around and for other things as well. As someone about to become a teacher myself, it just makes me love these kind of teacher roles that show that they really care about their students and make sure that they are happy (as well as fed and staying out of trouble). The relationship between him and YAI was amazing and that chemistry really shows on screen.

THERE ARE A LOT OF OTHER THINGS I CAN SAY ABOUT THE MOVIE BUT SERIOUSLY. JUST GO WATCH IT. NOW.

5 LOLLIPOPS/5 NOW GO WATCH IT OR SHISUS WILL SMITE YOU!

COMMENT COMMENT COMMENT. Talk about an important mentor in your life. Or about a group of people you consider a family and what you love about them. Or if you've seen this movie we can talk about it~