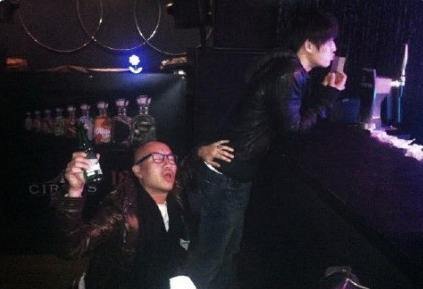 Jae Joong’s sexual orientation has always been a mystery. He was reportedly very close to his ex-band member Yunho, with many fans speculating that the two were a couple.

His sexual orientation was once again put in the spotlight when Suk Chun showed up at Jae Joong’s concert in Hong Kong two days ago to show his support. Sun Chun was seen holding a paper fan with the words “YunJae” (which stands for Yunho and Jae Joong) printed on it.

The artiste posted an intimate photo of Jae Joong and him taken during a birthday celebration the day before the concert, raising suspicions of the two’s "special" relationship.

Suk Chun explained in an online post yesterday that the paper fan was a gift from a fan. He made a public apology to Jae Joong for accepting the paper fan without knowing the meaning behind the words printed on it.

He also claimed that he attended Jae Joong’s concert because he happened to be vacationing in Hong Kong.

However, according to sources, Suk Chun announced that he planned to fly to Hong Kong just to support Jae Joong’s concert before he went there.

The 42-year-old has previously admitted on a show that he is homosexual. He even revealed that he is dating a man who is around his twenties.

Suk Chun added that they avoid appearing in public places together because his partner does not want their relationship to be exposed.

After news of him appearing at Jae Joong’s concert surfaced, Netizens have been guessing that the 27-year-old Jae Joong is actually the secret lover that Suk Chun mentioned.