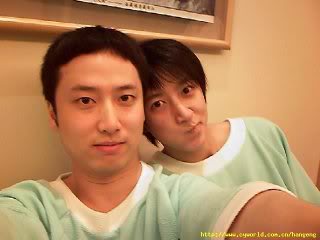 Based on Translations by: 庚家小小翻译站
Edited by: pocketostars (Note: Many edits + added notes were made and cross-checked with theoriginal Chinese document in order to increase clarity in English. I tried to preserve accuracy with the original source document, while also respecting the translator’s hard work. Speculating statements by fans/translators were omitted in order to avoid confusion with the contents within the original document. You MUST take this out with full credit because I took my liberties with the original translations and need to take responsibility for it).

[Note: Sun Le is Han Geng’s childhood friend and current manager. This is a statement that he had submitted to the Korean courts along with Han Geng’s other legal documents for the lawsuit. Those documents were leaked on the Internet in 2010 by an anonymous source (which the translation company that did the Chinese-to-Korean translations could be held liable to), but the contents were confirmed to be true by Sun Le in BQ Weekly’s exclusive interview with Han Geng’s team.] 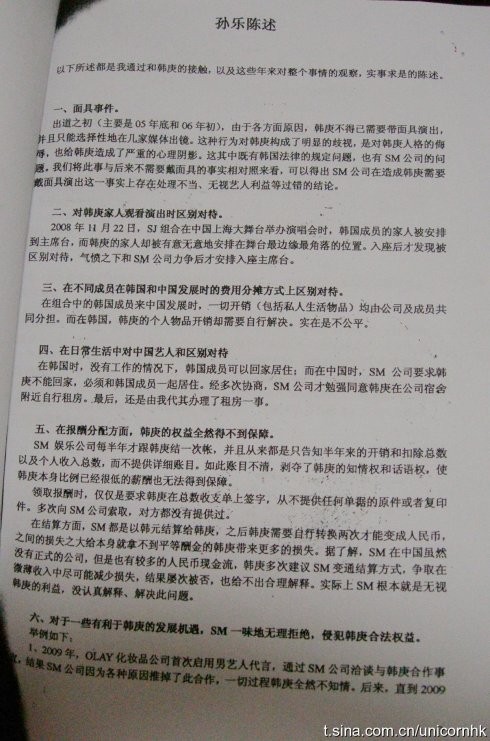 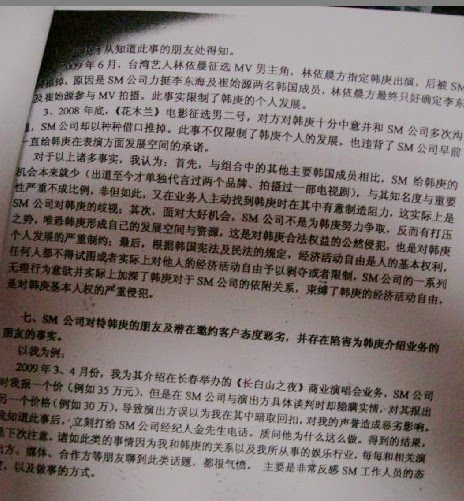 At the beginning of debut (primarily late 2005 to early 2006), due to a variety of reasons, Han Geng was forced to wear a mask to perform, and was restricted to only be able to appear on a certain number of TV stations. Such acts constitute clear discrimination and humiliation towards Han Geng’s dignity as a person, and gave him severe psychological damage as a result.  Aside from being an issue within South Korea’s legal policies, the issue was also with SMent. The fact that SMent made Han Geng wear a mask and the fact that it later came to light how, on the contrary, such an act was unnecessary, demonstrates SMent’s mishandling of the situation and their negligence of their artists’ interests.

2. Discrimination towards Han Geng’s family when they attend performances

On November 22, 2008, when SJ held a large-scale concert in Shanghai, China, the families of the Korean members were assigned to sit near the main, central stage; whereas, Han Geng’s family, whether intentionally or unintentionally, were relegated to sit at the furthest edge and corner of the stadium. After they were seated, and after learning of this unfair and differential treatment, Han Geng’s side had to angrily negotiate with SMent before his family members could be moved closer to the main stage.

3. Differential treatment towards members in cost-sharing practices when in Korea and China for activities

When the Korean members came to China for promotional activities, all living costs (including personal items and expenses) were equally shared between the company and the members. Whereas, in South Korea, Han Geng had to cover and resolve such expenses on his own. This is truly unfair.

4. Differential treatment towards Chinese artists in matters of everyday living

When in South Korea, the Korean members could live at home when there were not any activities going on; whereas, when in China, SMent did not let Han Geng go home, and required him to live with the Korean members. After negotiations, SMent reluctantly agreed to allow Han Geng to find a place to rent on his own near the company’s dormitory. In the end, I (Sun Le) handled the renting matter on his behalf.

5. Han Geng’s rights and interests in matters of pay distribution were completely unprotected

The entertainment company (SMent) paid Han Geng once every half a year, and only gave information regarding the total amount earned without a detailed breakdown (of the sources and allocations of earnings, as well as what has been deducted). The lack of transparency with the accounts deprived Han Geng of his right to be informed and his right to speak. which makes it so that Han Geng’s portion of the already minimal salary could not be safeguarded.

When receiving pay, Han Geng was only asked to sign off on the total balance, and was never provided the original or copy of any financial document, despite numerous and repeated requests to SMent.

In terms of payment, SMent always paid Han Geng in Korean Won instead of RMB. Han Geng would then have to convert the currency twice in order to receive it in RMB, causing even greater loss incurred upon Han Geng, who was never able to acquire his original payment amount (due to currency exchange fees and rates). It is known that although SMent does not have an official corporate establishment in China, there is a large cash flow of RMB. Han Geng had repeatedly suggested alternative payment methods to SMent in order to minimize losses on an already meager income, but the result did not change and SMent never gave him any reasonable explanation. In reality, SMent fundamentally ignored Han Geng’s rights and interests and did not provide any serious explanation or resolution to solve the problem.

In light of the aforementioned facts, my (Sun Le’s) thoughts on the matter are as follows: First, compared to other main South Korean members, the opportunities SMent gave to Han Geng are relatively few (from his debut up until now—2009—he was only allowed to endorse 2 brands by himself and film one television drama), which is inconsistent with his reputation and popularity. Furthermore, SMent deliberately created resistance when other artists and people from the entertainment industry expressed interest in collaborating with Han Geng. In fact, SMent is discriminating against Han Geng in doing so. Second, when Han Geng was presented with good opportunities, SMent did not encourage Han Geng, but instead tried to suppress him, in fear that he would develop on his own and gain his own resources. This is a clear violation of Han Geng’s rights and interests, and also severely restricted Han Geng’s personal development. Lastly, according to the South Korean Constitution and civil law provisions, freedom of economic activity is a basic human right. No person can impose any deprivation of or restrictions on another’s economic freedom. The series of unjustified actions by SMent served to deepen Han Geng’s dependance on the company, restricting his economic freedom, and severely violating his basic human rights.

In March/April 2008, I introduced a concert event called “Night in Changbai Mountain” in Changchun. SMent and I would negotiate a price (e.g. 350,000 RMB), but then SMent would secretly adjust the price with the event organizers (e.g. 300,000 RMB). As a result, the event organizers mistook me as someone who took advantage of the deal, which negatively impacted my reputation. After finding out about the situation, I immediately called SMent’s agent, Mr. Kim, to ask for an explanation. The reply was that he had made a mistake and that he would be more careful next time. These sorts of repeated situations are very upsetting because of their effect on my relationship with Han Geng, and with event organizers, the media, and collaborative partners. We are utterly disgusted with the attitude of SMent personnel, as well as with their manner of handling business.

I saw this on tumblr today and I thought it is worth to be shared here. Although the news on this statement is old but I think it is informative, as it basically confirmed some of those rumours that we have heard of mistreatments that Geng received from SMEnt. So the thing about the mistreatments towards his family members was true (I thought it was merely a rumour before this). And I don't think I knew that Ariel Lin's MV initially wanted Geng instead of Siwon and Donghae. I'm sorry if this was already posted and I'll delete it if it is.
Tags: hankyung / ex-suju members, sm entertainment
Subscribe
Previous
← Ctrl ← Alt
Next
Ctrl → Alt →
Previous
← Ctrl ← Alt
Next
Ctrl → Alt →