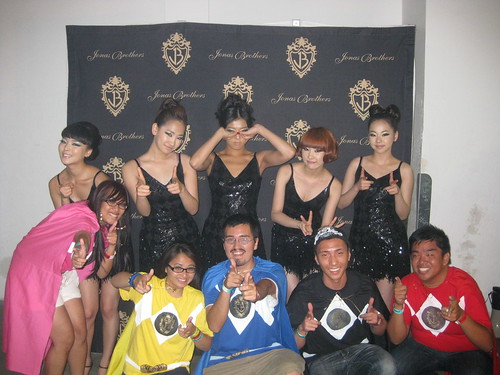 Yoobin IS awesome isn't she.

So this day was pretty fricking awesome. I even got into soundcheck for the Jonas Brothers which meant I missed the Wonder Girls dancing in front of the Verizon bus. My friend the black ranger (I am the pink ranger) made me feel better saying that I will get to meet them later anyway and it will be much better. AND HE WAS RIGHT.

I don't take videos of performances ever because I figured everybody else would do that anyway but I did take some pictures of them performing. 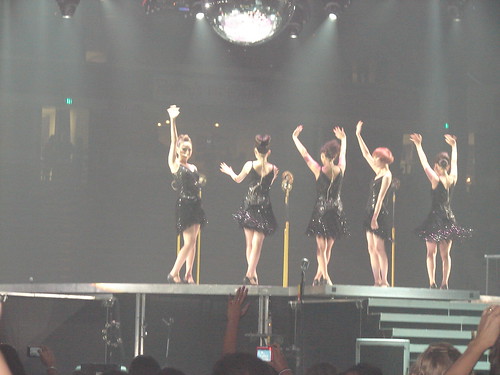 When they came out with their intro "NOBODY NOBODAYYYY..." I just pissed my pants. And I was so glad the audience received them very well, the people in front of me were doing the Nobody dance, and I could see from the audience they were doing it as well. 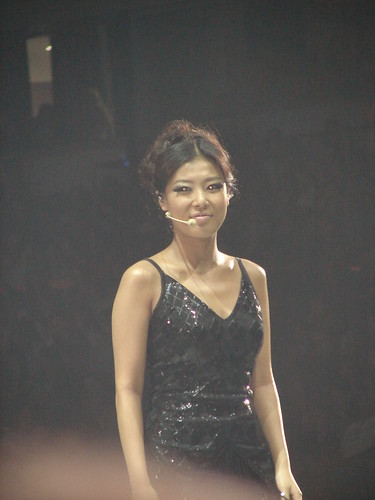 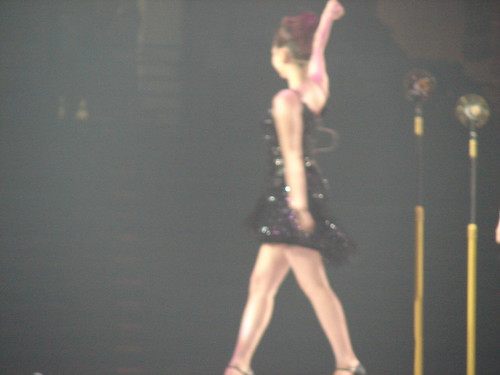 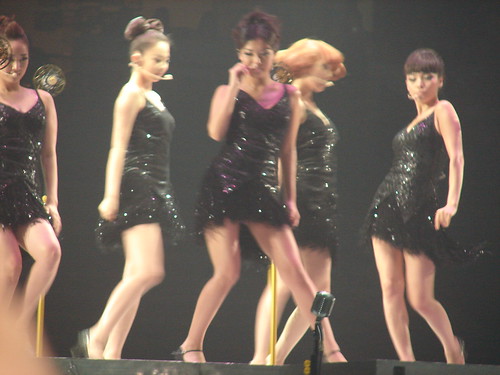 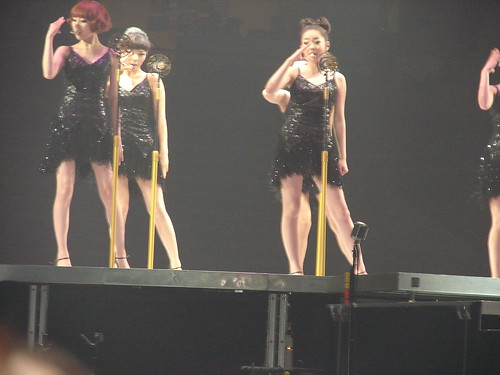 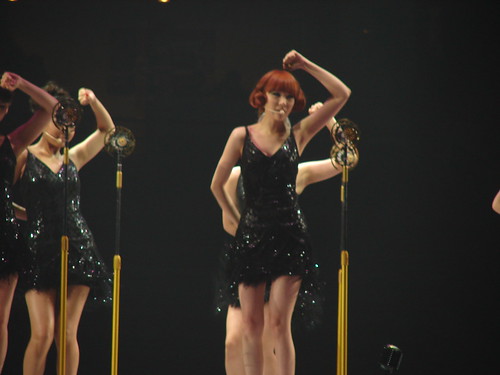 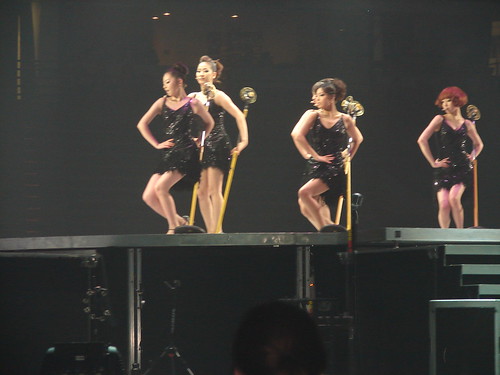 So yeah, their performance ended and I was just blown away. And again I was just really happy that the Sacramento audience seemed to like them. Although I was a bit disappointed they didn't play Tell Me. I was going to ask them about it but I got so nervous! AND Before I forget WE SAW JYP but unfortunately no pictures. We were talking amongst ourselves when Red blurted out "OMG IT'S JYP" and we all just basically lost it. JYP smiled and gave us a quick wave and hurried on. ALAS that was the last time we saw him that night.

So around 8:30 my friends and I left our seats to meet up with Hannah who was basically leading the Fantastics. She commended us on our capes, and she said it was a really good idea. The best thing about that is is that she heard it straight from the Jonas Brothers!!!! Long story short the Red and Yellow rangers were picked by the Jbros to play musical chairs earlier during soundcheck... and well okay here's the video. YOu don't have to watch the entire thing, WG-related business is within the first few minutes. I just thought it was really cool that Kevin Jonas sang a little bit of Tell Me.

WELL ONTO THE MEET AND GREET. So we were whisked away to the backstage area where we also saw Jordin Sparks who was in pain because she fell or something. Homegirl is tall yo. Even though she was in pain her face completely changed from D: to :D so I thought that was really cool.

Well we finally got inside the M&G and we took group shots with the Wonder Girls. I had no words at this point. I even wrote shit on arm, a list of things I might say to them. I wrote about 10 things and the only things I could say was "omg you guys are so fabulous and fierce" "ye eun you have such a nice voice" and "omg you are so pretty can i have a hug????" But omg Sun Ye is the prettiest thing ever and she was so cool. Yoobin was too, she was very involved with all the fans. They complimented us on our outfits and capes. So the lesson is that you must always have a theme if you want to be noticed and remembered haha. 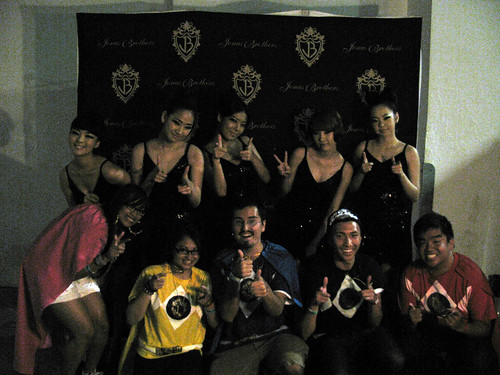 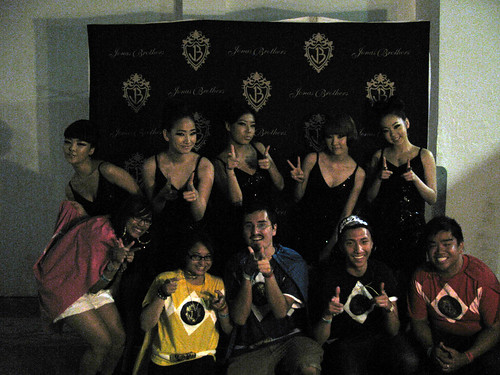 and i think this picture bears repeating.

So the second go around was when they signed things that needed signing and so they signed our capes. That was when I started babbling shit and got hugs from them all. Although I must point out that Sohee didn't really seem that into it and I'm just gonna say that maybe she was tired or something else. I assumed she was put off by us wanting to hug her. But still she was a good sport! even though she spelled my name wrong but it's okay haha, people call me "beronica" all the time. 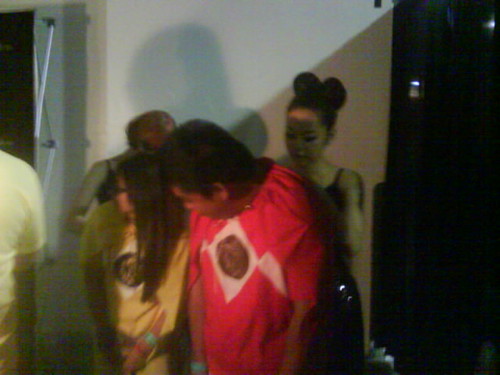 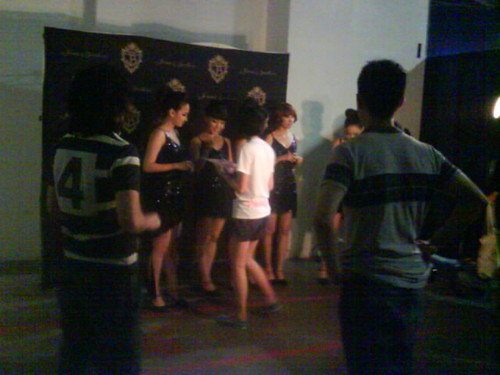 And my current phone wallpaper/love of my life. Excuse my fugness. haha and one of the PDs were like HEY! and so I had to stop. 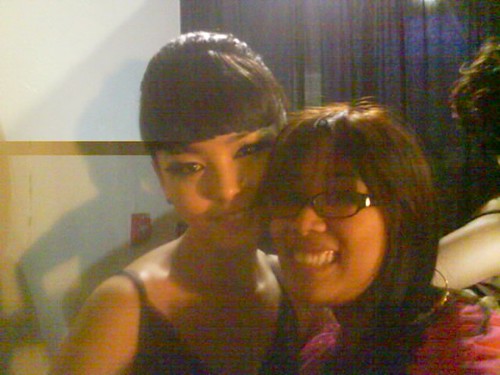 Black ranger, having a black cape and all had nothing to sign with but Ye Eun was a total sweetheart about it and was like "No! We must sign something for you" and she found a silver sharpie, and so they all took turns to sign his cape. Black Ranger told me that he told Sunye to say hi to Jo Kwon for him, to which she replied "Okay!"

In the end we all said bye and we left to go back to our seats. We missed the first half of the Jbros concert but it's okay cuz I'm going again next year hahaha. They put on a good show as usual but me and Black missed the very last performance because he needed to carry some boxes for Hannah. He told me that he got to go in front of WG tour bus! So yeah we grabbed a lot of little postcards and passed them around to a lot of people and most of them were interested which just really warms my heart.

Black and I met up with the other rangers and we snuck inside the Arena once again where we saw the WG do their M&G and there was a long line. Black and I met a wonderful lady who was the mom of Hannah's assistant (frick, i forgot her name) and she was so nice. She said she had been following WG on their tour and I think she said she's been to 75 of their tour dates? I forgot but it was a sizable amount of dates. I don't know how she can withstand a thousand screaming girls 75 times, but more power to her!!

We also met up with two other Fantastics who were also looking for JYP. David, another JYP worker who was really cute btw, said that JY was really sick :/ We suggested that they bring 2PM over here and he was like "nah they're really busy. JYP is trying to make them into the Jonas Brothers over there right now" which gave me lulz. And I think by that he meant the scope of fame that the jbros had, not really the music. Rainstone was there too and he was the one taking pictures.

So us Fantastics stood inline again and one of them went to Korea Times and made me so jealous with her autographed Key bag, and we were like "omg do you like 2pm??? ME TOO" "omg you like SHINEE? ME TOO" so that was great. I don't have many friends who are into the kpop scene. Black, me, and one of the girls took another pic with them and she said she would find me on facebook to add me but she hasn't yet. But she might be on SOOMPI posting pictures of her, two jonas rangers, and WG.

So us Jonas Rangers stayed til the very end of their M&G and danced along to Nobody. Yoobin saw us and she danced along with us! And yeah that's pretty much it. They left and we said our goodbyes and i love yous. So that was pretty much the best night of my life. 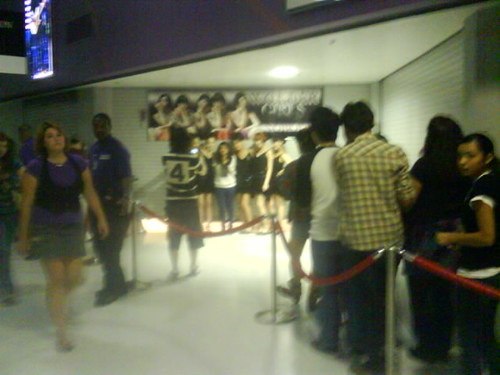 (i was gonna wait til i had more pictures but idk when my friend will upload them :/ )
Source:
Me &my cameras
My friend's camera
My Flickr page
youtube