From H.O.T To EXO, The Evolution Of Idol Groups 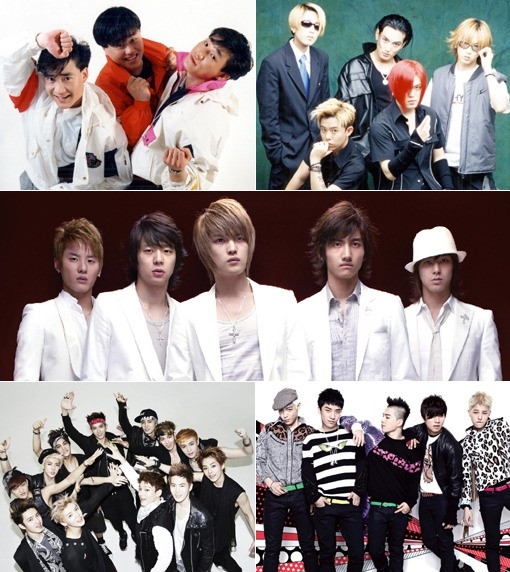 Idols are like small corporations these days. They control the economy of the entertainment industry. What gave rise to the current state of idol stars?

Twenty years ago, Pop dance groups such as Noise, Seo Taiji and the Boys, TURBO, and Deux was already making dance music popular. These groups were the "ushers" of the new era of music from which the current idol groups evolved. When SM Entertainment released H.O.T, it began a new era of Korean music that eventually was branded K-Pop. Among stars that evolved from this K-Pop revolution are Shinhwa, TVXQ, G.O.D, Sechs Kies, Jinusean, 1TYM, Big Bang, and EXO. Idol groups are the dominant performers on the K-Pop stage today, but it wasn't so twenty years ago. What changed? It's time to examine the evolution of the idol group in Korean music history.

Although H.O.T was the group that ushered in the idol group era, rumblings of a "dancing group" began with Sobangcha (Firetruck), a dance group that debuted in 1987 with the song "Last Night".  Their baggy pants instantly became the "must-have" items among the teenagers in Korea. They were not, however, created with the intent to market their characters. That is, "character content", or the marketing of individual characters was not something that DSP Media, Sobangcha's management company, even had in mind. Sobangcha was formed by three friends (Jung Won Kwan, Lee Sang Won, Kim Tae Hyung) who were well established back dancers.

What about Seo Taiji and the Boys? They are often called the first idol group because they were the ones that broke through the music barrier in conservative Korea. Seo Taiji's excellent song-writing skills were complemented by Lee Juno and Yang Hyun Suk's dancing skills. However, they are not the prototypical "idol group" in the sense that they were not created with "character content" in mind. Seo Taiji asked his then dance teacher Yang Hyun Suk to join him in creating a music group, and Lee Juno joined almost as an afterthought.

No, the concept of "character content" was brought in by SM Entertainment and H.O.T. They gave the lead singer a memorable nickname (Kangta), and each member had their unique abilities and roles within the group. Each member was cast through an audition, and they were trained by professionals for a period of time. They were, in fact, processed through the SM Entertainment system. Everything, from their visual concept to their way of singing, was manufactured through the SM system, and as a result, they were able to manufacture creative content through the "use" of the idol group. Each member had their distinct part, with one member in charge of the vocals, another dancing, and another just good looks. Their looks changed with every new title song, and in this way the first generation of the idol groups was established.

The one that broke free of this mold was probably TVXQ. TVXQ members did not divide their roles. They were all good looking. They were all great dancers. They were all great singers. Each member of TVXQ held their own in every area. They sang their songs live, executing difficult a capella verses with ease. In fact, the five-manned TVXQ was originally established by taking the trainees who were each groomed to be the leader of their own groups. TVXQ was a sensation for their skills and set the trend for the future idol groups to be more skilled in their crafts.

If TVXQ were the ones that brought in the era of better total performance, Big Bang can be said to have ushered in the age of the singer/songwriter idol groups. Their debut was fully documented through a TV Show, and their musical prowess was praised throughout the course of the song. They were not only pretty faces dancing on the stage, but Big Bang was able to establish themselves as artists. Current idol groups such as BEAST and Block B continued this trend through the leaders Yong Junhyung and Zico. Having a songwriter in the idol group is quickly becoming a norm thanks to Big Bang.

We are now at the age of EXO. EXO's breakthrough is with their performance, which is more akin to storytelling than just an enjoyable dance. As this decade's first million-seller idol group, their popularity is still growing. Their performance with "Growl" set the precedence for groups such as VIXX and BTS to follow. They are the cumulative of TVXQ (in that they are all great singers/rappers who are good looking and great dancers) and Big Bang (in that they are singer/songwriters who are musically talented), who were in turn the cumulative of the artists before them.

K-Pop and idol groups will continue to evolve, and the future of K-pop seen through the lens of EXO seems very bright.