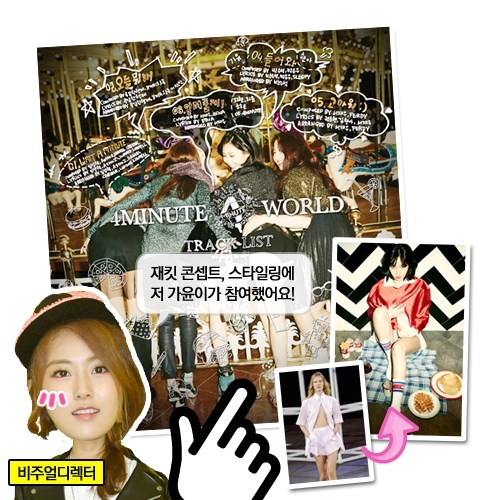 ♬ Whatcha doin’ today, whatcha doin’ later, whatcha doin’ on the weekend, lalala lalala~
Hello. The readers of ‘STARCAST’. This is ‘4minute’ Ga-yoon. Did everyone listen to the new song ‘Whatcha Doin’ Today’? It is an exciting dance song that can get rid of the stress all at once. Just like the music, the fashion also stands out. Who would have made this pretty look?

That is ‘4minute’ visual director Ga-yoon! It is embarrassing to say it out loud. I had two jobs(?) in the new album. I was in charge of the concept of the cover of this album and the style of the members. Oh, that does not mean I did it just by myself. I made a decision by continuously discussing with the members.

The truth is, this is not my first time being in charge of visual directing. I also participated when I was part of ‘2YOON’ with Ji-yoon on January of last year. I put efforts into coming up with new items matching the genre called country pop. I visited Thailand myself and obtained the clothes and props and so on. 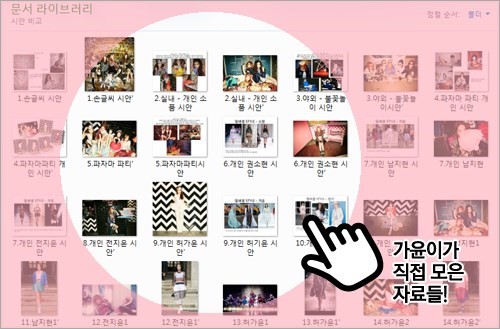 If that is the case, how would I have made the style in 4th mini album ‘4minute World’. Are you guys saying it is hard to know just by listening? So I have prepared. I will reveal the PPT materials that I used during the concept conference. The readers should check it out also.

▶ First, I introduce the cover of ‘4minute World’. 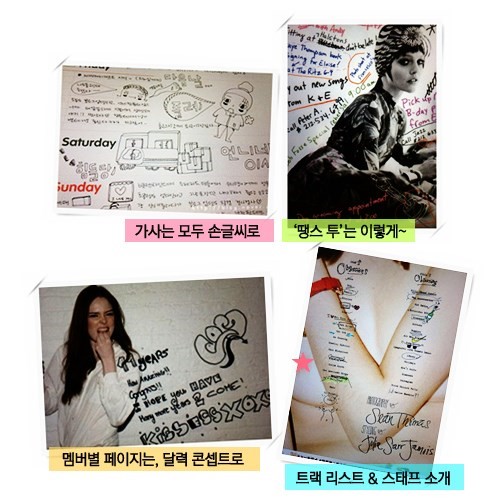 I first started off with working on the album cover. I decided on the concept while looking at the titles of the listed songs. ‘Wait a minute’, ‘Whatcha Doin’ Today’, ‘Come In’, ‘Thank You’. They sound like girls’ usual conversations, right? To emphasize such things, I have utilized the handwriting.

I took part king that I am writing a diary. I wrote the number in the album cover in an adorable way, and also emphasized anniversary days such as the date of debut and so on. I also drew things such as star and heart and so on. I made use of doodles. I got help from the youngest member So-hyun. Her skills were so good.

You guys are curious about the result, right? Should we take a look at it right now? 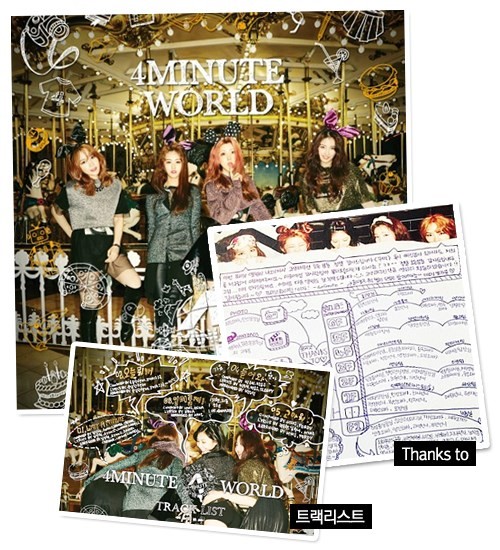 Ta da~ What do you guys think? Isn’t it cute like ‘4minute’? First, I filled the cover with the drawings such as cake and balloons and so on that might be used for the party. In the track list, I drew in talk bubbles on top of the members’ heads. I added a feeling of as if they are main characters in cartoons.

My most favorite part is ‘Thanks to’. It is meaningful since all the members took part in handwriting. The personalities of each member were shown at this part. I, who is chic(?), just simply wrote what I need to say. The youngest member So-hyun completely filled the page with cute writing.

▶ Next, should we check out the inside of the album cover? First, it is an indoor scene. 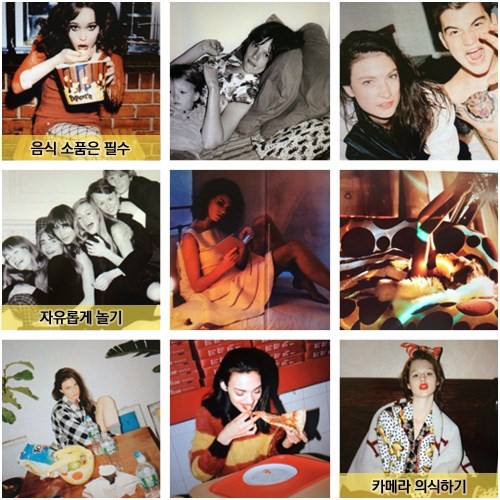 There were three points in indoor album cover photo. Those are ‘Food props are necessary’, ‘Play freely’ and ‘Be aware of the camera’. I chose the concept of holding a pajama party with friends in the middle of the night. I contained pictures such as playing card game or eating snacks.

An important thing is that, I emphasized simple feeling. So the members took pictures for one another and also freely ate food. I tried hard to contain the free atmosphere of the friends around the same age. ‘4minute’ also likes this free concept. 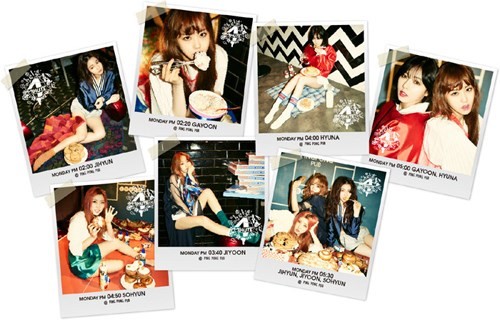 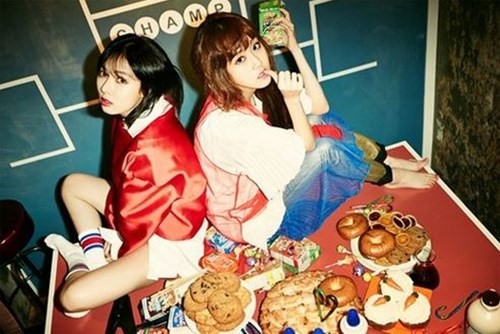 Now! This is the completed indoor picture. Pajama party, you guys can feel it, right? Maybe because the members all lived in an apartment together for a long time, we were all used to this kind of pajama party. The facial expression came out as if it is real. We ate cookies and ice cream without worrying about diet just on this day.

▶ There is also outdoor shooting scene~ 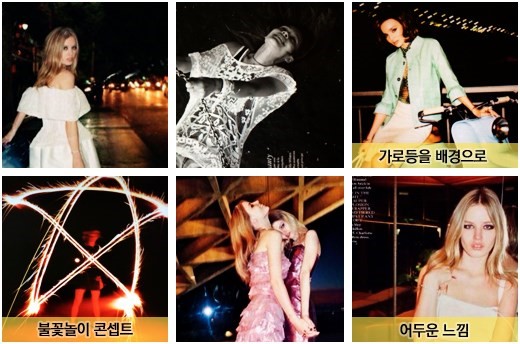 We thought it is too not enough to just shoot it indoors. So we stepped outside. There were also three points in shooting outdoors. ‘Take a picture with the streetlight in the background’, ‘Fireworks concept’ and ‘Dark feel’. I suggested to the members to take pictures looking as physically active as possible.

Why did I do that? This is the extension of pajama party. Friends usually say “Should we go outside?” while playing in the room. They walk outside and do fireworks, and also take pictures under the streetlight. I took part with a feeling that we are really playing rather than working. 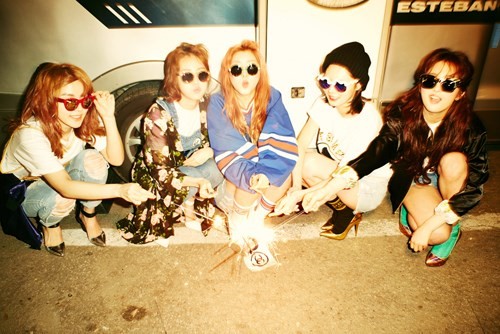 This is the completed outdoor picture! We look like we are having so much fun, right? We were not tired even when it was late night. We felt like we were getting rid of the stress as we did fireworks in such a long time. We were also riding a skateboard on the street in which no one is around. The members fell and also showed some of the body comedy.

▶ Now then, I am going to reveal the examples of the style of the title song ‘Whatcha Doin’ Today’ that I put most efforts in. Behold~ 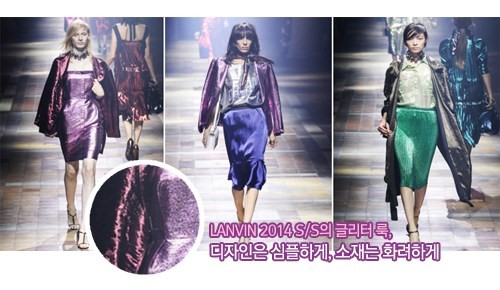 The part that I paid most attention to was the style on the stage. The truth is, I usually have high interest toward fashion. I also got lots of experiences while shooting for the fashion pictorial. Not only Korea, but I also look at all of overseas collection. It did not take long for me to find the concept that matches perfectly with ‘Whatcha Doin’ Today’.

The 2014 Spring/Summer collection of the fashion brand Lanvin caught my attention. I liked the metallic clothing fabric. However, I did not make the fabric look too much. It can look childish if it gets too fancy. The concepts that I decided in such a way are ‘Metal look’ and ‘Glam look’.

▶ Should we also check out the styles for each member? First, it is Hyun-a. 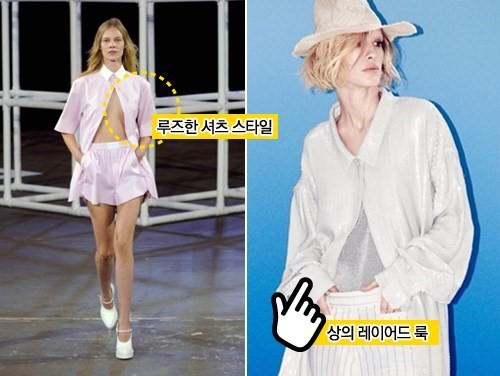 It is sexy when it comes to Hyun-a. For that reason, I thought of the girly missing bottom look that used hot pants. The concept was to layer the sweatshirt(Man to man) to a loose shirt. I also emphasized the free feeling by unbuttoning the shirt. So that it can shine a little more on the stage. 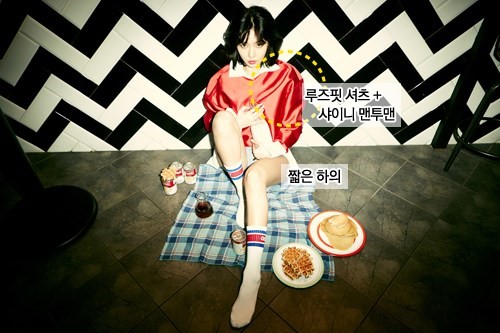 The first work of the stylist Ga-yoon. It is Hyun-a’s album cover style. On top of a loose shirt, she layered the red sweatshirt. To this, I made her wear hot pants and the ankle-length socks. Sporty girl vibe, it really stands out, right? I can sense that it is going to be popular this spring.

For the record, I will describe the hair and the make-up also. This is black hair Hyun-a showing up again in a year. Please forget about ‘Trouble Maker’ gold hair Hyun-a. Her white and flawless skin stands out much more. The make-up is sexy smoky look. She applied the mascara thoroughly until the underline. 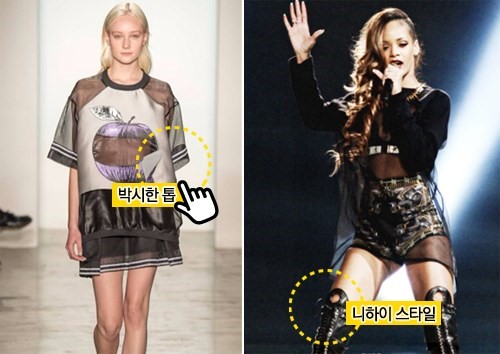 She is the charisma member in ‘4minute’, right? This is the style of Ji-yoon. I wanted to emphasize the feel of powerful female rapper. I thought of Rihanna style. I decided to make use of knee-high style boots or socks. For the top, I chose the boxy one and decided to go with see-through that can also show the feminine sides. 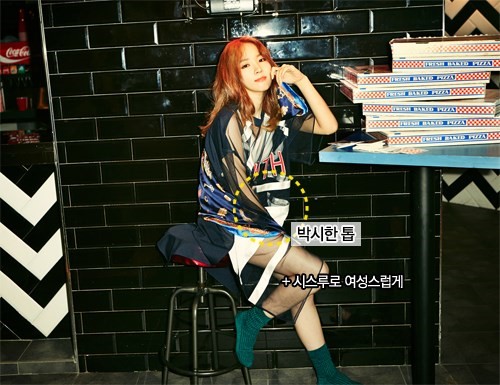 This is Ji-yoon’s hybrid fashion. She wore boxy top but looks feminine to some extent, right? She emphasized elegance and sexiness by making the see-through fabric come down deep to the bottom. I wanted to emphasize Ji-yoon’s feminine sides that only I know of and I think it turned out nicely. She looks much pretty, right?

Especially, the reactions toward the hair are also hot. It is the longest hair she ever had since the debut. Even the phrase ‘Jeon Ji-yoon Whatcha Doin’ Today hair’ rose up as the automatic search phrase on the portal website. The make-up that emphasized the eye line is also noticeable. It made the eyes point upwards and made her eyes into cat eyes.

▶ This time, it is Ji-Hyun, the member in charge of feminine sides in 4minute. 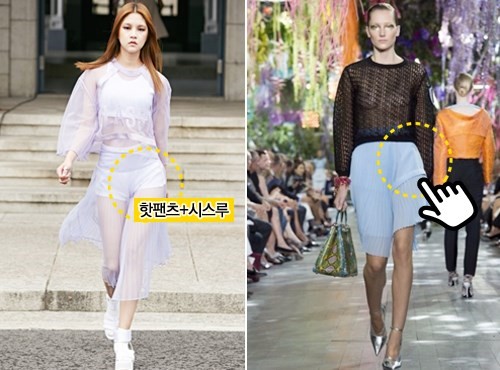 Other people might not know it well but the truth is, Ji-Hyun’s legs are really pretty. So I chose hot pants as the new album style point item. Instead, I chose something unusual. I decided to choose hot pants with flower print or pearl fabric or by layering the see-through. 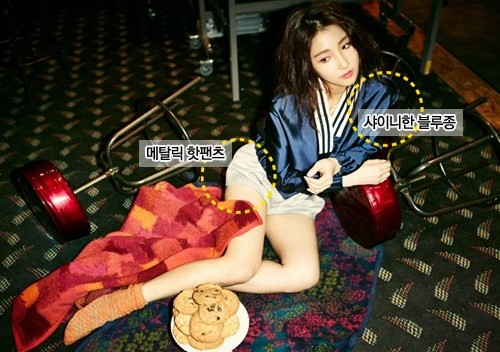 The hot pants that Ji-Hyun wore, how does it look? Can’t see it well? Please look closely. Bling bling, it shines. It is silver pearl. I also chose the top that has glossy fabric. This is the pearl unifying in color style that I truly want~.

The hair is natural perm style. It has a slightly messy feeling. When on the stage, it emphasized pureness at times with a light ponytail. For the make-up, it is puppy eyes make-up in contrast to Ji-yoon. It is also referred to as tareme make-up, right? It emphasized the eyes that are pointing downwards.

▶ The style of the youngest member So-hyun is also on the way. 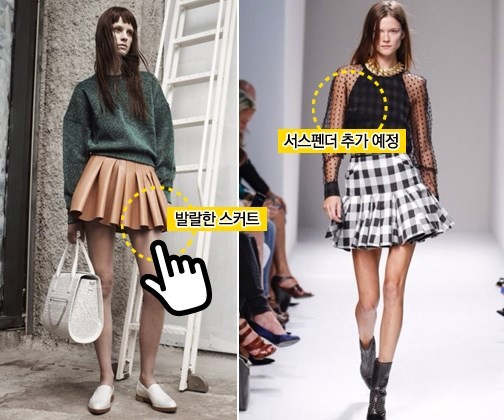 ‘4minute’s cutie, it is So-hyun’s turn. I decided to make her wear a skirt to emphasize the youngest member’s liveliness. I decided to emphasize the cuteness and feminine sides by matching the top with short length. Also add cute items such as the suspender and so on. I felt like I was playing with the doll. 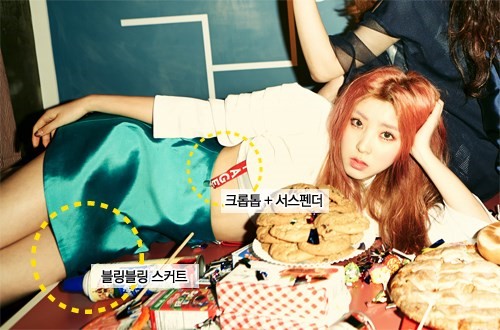 Now. This is the style of the youngest member that is completed in an adorable way. This is my most confident work. She makes the fatal facial expression for some reason. She wore a short crop top and matched the suspender inside. Since she is the youngest, we decided to be moderate. I made her wear the skirt with the longest length.

The hair turned into pink. Compared to other members, her outfits are plain so we emphasized the hair. The make-up is also incredible. We used the pink shadow to match the hair color. We made bling bling freckles by attaching the cubic on the cheeks when on the stage.

▶ Last but not least, this is me, Ga-yoon’s style. 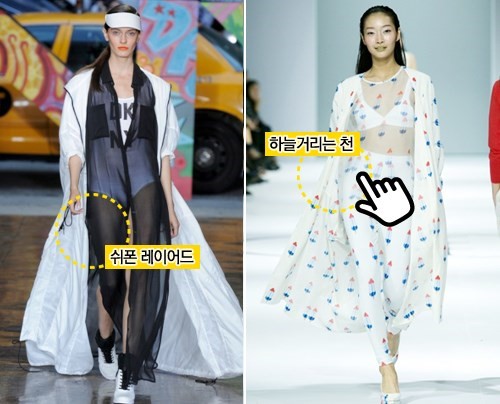 For me, I like the clothes with long lengths. It is the item that supplements skinny body type. However, choose the ones with thin fabric so that it does not look frustrating. I guess I can say it is so-called goddess concept. I think it will well-emphasize the dynamic feeling since the clothes fly well when moving if they happen to be thin. 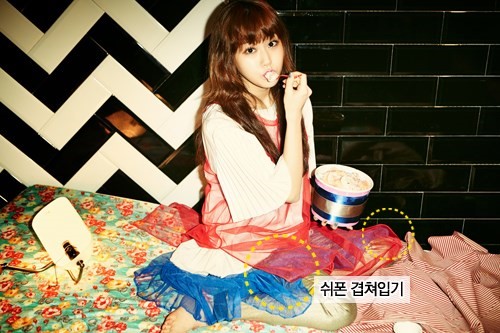 Ga-yoon brand romantic look, what do you guys think? I layered it with thin chiffons. Fancy but feminine, it is so my style~. The clothes also move elegantly whenever I move. I guess I have to emphasize the glam look that is the main concept also, right? I chose the gold pearl colored leggings.

The hair should also look nice. I chose the abundant wave perm. Doesn’t the front hair look also lively? For the make-up, I reflected my taste the way it is. I applied the red lipstick that I usually use on the stage also. Since the lips are the point, I only slightly added a shade to the eyes with brown tone. 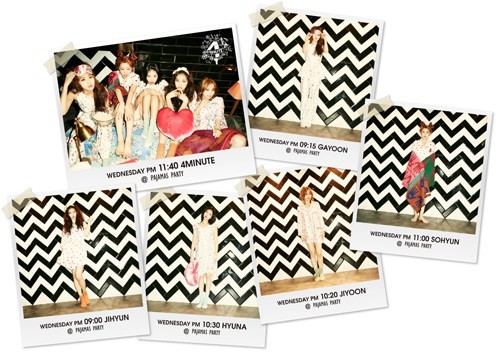 This is it for the presentation by Ga-yoon, who is ‘Visual director’ and ‘Stylist’. How was it? This album, it is incredible, right? I hope it brings good results as I have put efforts into it. I ask for lots of interests and cheers toward ‘4minute’ from now on to the future. I will see you guys next time. Bye~