Tablo answers questions regarding past albums

Although he does Q/A quite frequently , this week he chose the theme of older albums. I noticed on old omona posts about Epik High there was some negative suspicions regarding certain albums , i feel this Q/A debunked some of those.

note: He didn't answer questions to do with "special albums" like MTS,Epilogue etc 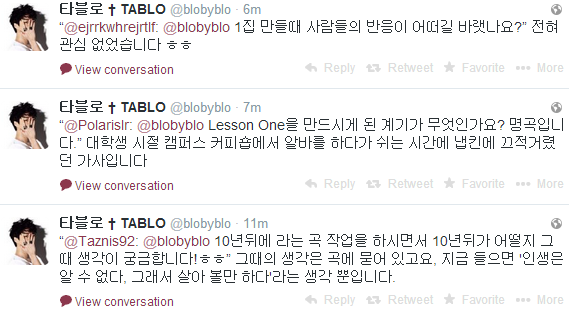 “@ejrrkwhrejrtlf: @blobyblo when you were making 1st album what did you expect from the people to react?” I didn’t really care how people would react back then haha
“@Polarislr: @blobyblo how did you come up with the song Lesson One? This song is classic.” When I was in college I was working as part-time job and wrote this lyrics on a napkin when there was free time.
“@Taznis92: @blobyblo while you were working on 10years after I was wondering about how you feel about the song now since it’s been over ten years!! Hehe” My opinion on the song is buried since it is opposite of what had happened. However when I listen to that song now I think that ‘Life is uncertain. That is the reason why you live’
High Society (2004) [original post of trans] 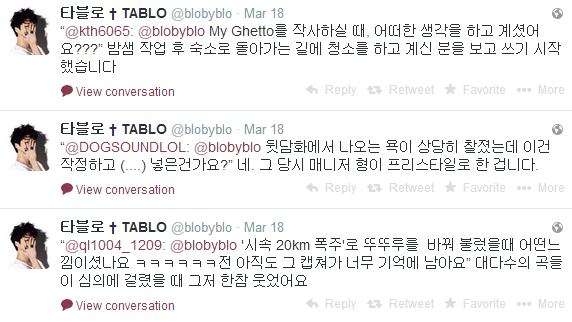 “@kth6065: @blobyblo: what did you think about, when you were writing lyrics for My Ghetto???” When I came back to my dorm after I finished working I saw a person who was cleaning the room and I decided to write it.

“@DOGSOUNDLOL: @blobyblo from the song Talk behind one’s back abusive languages were well described did you happen to (….) write and put it in?” Yes. At that time manager hyung spoke in freestyle and made the song.

“@qi1004_1209: @blobyblo ‘speeding at 20km/h’ when you happen to change the song to Tuturoo how did you feel LOLOLOLOLOL I still remember that moment when you did that on TV” most of the songs at that time were under consideration but it was so funny that this song was okay back then
Swan Songs (2005) [original post of trans] 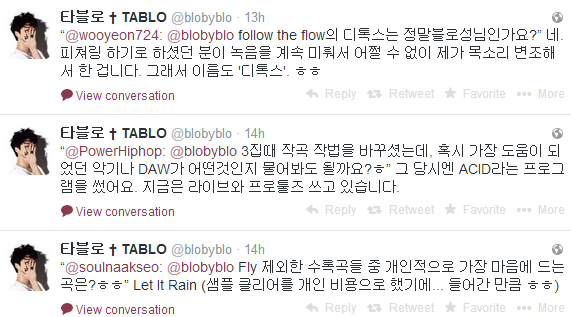 “@wooyeon724: @blobyblo from follow the flow is it real that D-Tox is actually you?” Yes. It was supposed to be someone else featuring but that person kept delaying the schedule so I unavoidably had to change the tone of my voice to rap it. That is why the name is ‘D-Tox’. Haha

“@PowerHiphop: @blobyblo on 3rd album you changed your composing style, and was wondering what kind of instrument or DAW program that you have used? Ha” At that time I’ve used ACID program. However these days I use live and protools.

“@soulnaakseo: @blobyblo what is your favorite song in that album excluding Fly? Haha” Let it Rain (I paid sample-clear of that song… I like it how much I paid for it)
Remapping the Human Soul (2007) [original post of trans] 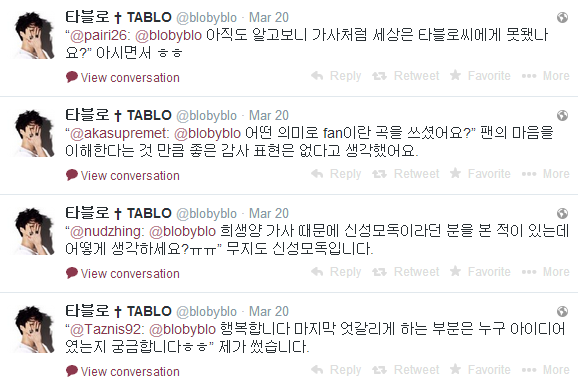 “@pairi25: @blobyblo do you still think that like from your song ‘As I found out’ like the lyrics is the world still mean to Mr. Tablo?” Heh heh you already know

“@akasuprememet: @blobyblo why did you happen to create the song ‘fan’?” I wrote it in order to express and understand fan’s mind as much as the thoughts you guys have on us.

“@nudzhing: @blobyblo because of the song Sacrifice I’ve seen a person with desecration and was wondering what you feel about that? ㅠㅠ” Ignorance is also desecration.

“@Taznis92: @blobyblo on the song happiness the end part of the song was little confusing I was wondering who created that kind of idea haha” I wrote it. 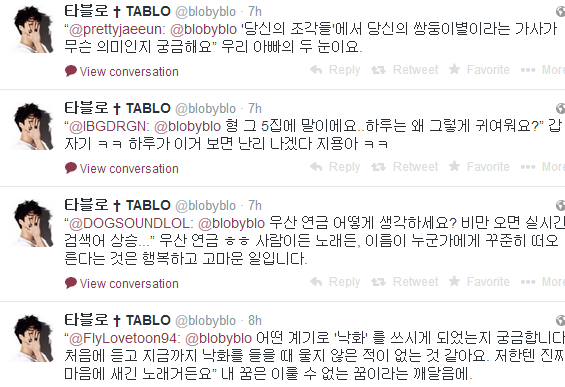 “@prettyjaeeun: @blobyblo from ‘pieces of you’ in the lyrics it saids you’re my heavenly twins and I was wondering what that part means” My father’s two eyes.

“@IBGDRGN: @blobyblo hyung from 5th album.. Why is Haru so extremely cute?” Why so suddenly LOL LOL if Haru sees this it’s going to be a disaster GiYong(GD) LOL LOL

“@DOGSOUNDLOL: @blobyblo what do you think about umbrella’s annuity? When it rains outside the ranking goes up in real time…” Umbrella’s annuity haha people or songs, when the name comes up with perseverance it is makes me filled with happiness.

“@FlyLovetoon94: @blobyblo how did you come up with ‘fallen blossom’. When I first heard and hear it now I cannot stop crying. For me this song has engraved my heart” I realized that my dream cannot be accomplished.

“@liverpoolsk: @blobyblo did you like the result of your 6th album?” I did like some songs’ result in the album, but I shouldn’t have made 6th album into 2CD. I want to make albums that has less songs but packed with song in an album.

“@jmchaha87: @blobyblo Where did you get the inspiration in the song Supreme 100? The song had incredible passages in the lyrics” I was going to write 16-20 measures like other songs but I got excited which ended up writing 100 measures…

“@sini729: @blobyblo when I hear Don’t Hate Me on 7th album I had a feeling that the song was little bit related to my friend’s situation and it really touched me which I was wondering what did you think about when you created the composition?” This world and the situation I was going through haha

“@jh_maboo: @blobyblo when you moved to another agency there was a lot of talks about Epik High totally changed their music style and fans were unsatisfied with the result.. What do you feel about this?” We had no impact on changing the agency. The changed was caused because of my mental condition that has changed the music style. I agree with you. Even though I have no regret.
untranslated tweets source: Tablo's twitter
all translated tweets by : wannabe@icaruswalks.com
Tags: epik high, tablo, yg entertainment
Subscribe