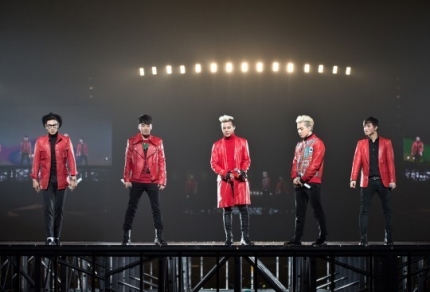 The music video of BIGBANG’s “FANTASTIC BABY” set a record with 100 million views on YouTube.
As of 1:40pm on the 27 this month, the number of views for the music video of “FANTASTIC BABY” on BIGBANG’s official channel on YouTube surpassed 100 million, recording total 100,003,000 views. BIGBANG’s label YG Entertainment said, “The record has been set in two years from March 6, 2012, when the music video was uploaded on YouTube. It proves the fact that the song has been loved by fans consistently since its release”.
The record makes BIGBANG the first Korean boy group who has a record of more than 100 million views for their music video on YouTube.
“FANTASTIC BABY” is one of BIGBANG’s most popular songs, which was included in BIGBANG’s fifth mini album “ALIVE”.
Along with “FANTASTIC BABY”, 16 music videos of BIGBANG have reached 10 million views and five among them have recorded 30 million views on YouTube.
BIGBANG members performed as solo artists and held BIGBANG Japan six dome tour last year, and they continue to actively perform this year, too. T.O.P has recently been shooting film “The War of Flower 2”, and SEUNGRI turns into an actor in SBS drama series “Angel Eyes” to be aired from this April. DAESUNG has been preparing for Japan Arena tour that will begin in June, and TAEYANG is working on his solo album. Plus, BIGBANG’s new album will be released by this summer.