Yoo In Na and Ji Hyun Woo Have Broken Up 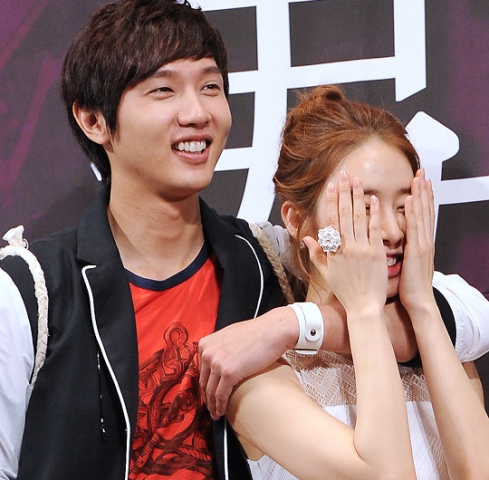 According to multiple sources, actors Ji Hyun Woo and Yoo In Na are no longer romantically involved, and may have ended their relationship even before Ji Hyun Woo was discharged from his military service.

Ji Hyun Woo had finished his military service earlier this month and Yoo In Na’s absence from his discharge ceremony did not go unnoticed. At that time, her agency, YG Entertainment, explained that she was unable to make it to the ceremony because of her busy schedule and that the couple was doing well.

Both of Ji Hyun Woo and Yoo In Na’s agencies confirmed that the two had broken up. Ji Hyun Woo’s source explained that the actor had not announced the break up during his ceremony because he thought it would be inappropriate as the man to announce the break up first.

A source from YG also added that they had not known about the break up when Yoo In Na missed the ceremony and that the actress had been busy with her activities in China.

Ji Hyun Woo and Yoo In Na met and became romantically involved while costarring in the 2012 tvN drama “Queen In Hyun’s Man.”

Can't help but side-eye JHW. YIN even said this “I realized the feelings while filming the drama, but I was confused whether this was reality or just my drama role,"  Then JHW confessed like that, and she decided to give a go. Timing didn't help and he went to army after one month dating...