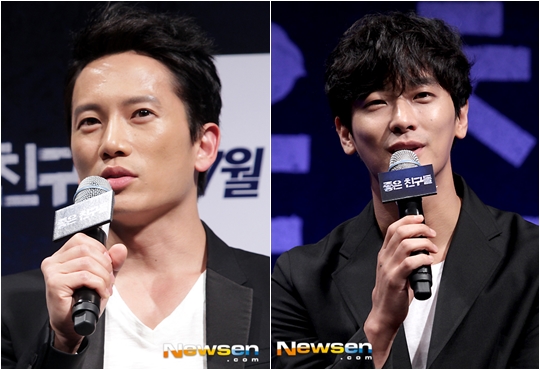 Joo Ji Hoon took everyone off guard by making an unexpected comment about himself.

Joo Ji Hoon attended a press conference for film Good Friends on June 12 at the Apgujeong CGV and said, “There was a scene in the movie where Ji Sung hyung had to drive at full speed and make a U-turn. He couldn’t walk straight afterwards because something went wrong in his hip joint. But he wanted to continue filming. It was amazing. I was tired and sleepy at that time."

Ji Sung then said, “Joo Ji Hoon is like a pharmacy. He has all kinds of drugs. So I got some medicine and treatment from him,” and Joo Ji Hoon replied, “That’s a very dangerous thing to say,” catching everyone off guard as he referred jokingly to his prior drug charges.

Ji Sung continued “(Despite the hip injury) We had to finish filming the scene that day. So I had to continue filming,” and Joo Ji Hoon also shared, “He could’ve adjusted it by using camera walk but he really ran hard.”

The movie will premiere on July 10.