Get ready Omona, SMTown is going to embark on World Tour no. 4! 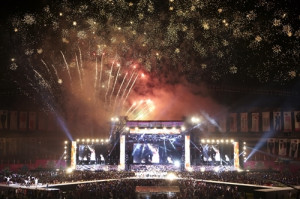 The artists of SM Entertainment will be beginning their 4th World Tour starting in August with a concert in Seoul.

SMTOWN LIVE will begin their 4th tour on August 15th with their first stop at the World Cup Stadium in Seoul, Korea. Artists participating in this year’s tour include TVXQ, Super Junior, SHINee, EXO, Girls’ Generation, f(x), BoA, and Kangta.

Ticket sales for this first Seoul concert will open on July 3rd at 8:00pm through Gmarket. Tour stops other than Seoul have yet to be announced, but stay tuned for more information on SMTOWN LIVE’s 4th tour!

Previously, SMTOWN LIVE has seen much success during their first three World Tours, with successful concerts not only in Asia but also around the world. Will you be attending?

So excited for this Omona! Maybe this time they'll recognize Canada and Australia.