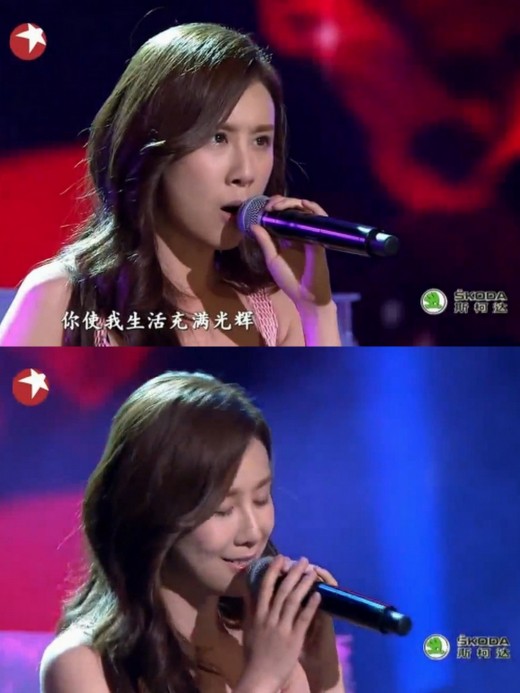 Known as the Chinese ballad singer who debuted in Korea, singer Zhang Liyin who was on the Chinese version of 'Immortal Song' (不朽之名曲) is gaining focus and interest from the public once again with her singing abilities.
On the evening of the 24th, Zhang Liyin is currently 2nd on the overall search ranking, and is 1st in celebrity search rankings on China's largest SNS Weibo. It is because of her impressive stage on Dragon TV's 'Immortal Song' that was broadcast on the 22nd.
Zhang Liyin who did the second performance, chose the song 'The Rose In My Heart' from legendary veteran singer Li Gu Yi who was invited.
Beforehand in an interview Zhang Liyin said "Li Gu Yi teacher is to me is an image of a goddess. I'm really nervous, but I will do my best in singing and I hope I will receive everyone's support" and strengthened her resolve.
Zhang Liyin who came on the stage greeted with 'When I was 14 years old, I left home for Korea and worked. Yearly during the Autumn Festival (Chinese New Years) I could not spend it with my parents and I was terribly sad. But every year Li Gu Yi teacher's songs were with me. I am really thankful to you" with that said a grand orchestra and beautiful rendition of the arrangement of 'The Rose in My Heart' was performed passionately. Zhang Liyin who started the song with controlled feelings, she heightened the progress of the mood with explosive emotions and  bursted out brillant techniques that moved the audience and viewers.
Li Gu Yi who watched Zhang Liyin's performance, "It is very moving and compared to the original song it was more intense. I hope you receive strength and continue to sing better." She praised her.
After Zhang Liyin's performance was broadcast it was the talk of netizens and received attention for being 1st in celebrity search rankings.

To Zhang Liyin who it has been three years since she resumed an official activity, "It has been awhile, great to seeyou" "Great singer is here" "It was really touching" "I've waited for you" "I've been a fan since 'Timeless' and to see you receive interest, I am happy" etc. positive responses were given on Zhang Liyin's performance.
Meanwhile in 2006 Zhang Liyin debuted in Korea with 'Timeless' and after that continously promoted in China. At the end of a long break she made a comeback in February 'SM The Ballad' singing the Chinese version of 'Breath' with EXO member Chen.

Glad to see her talent is getting more recognized lately