Yoo Jaesuk involved in an accident! 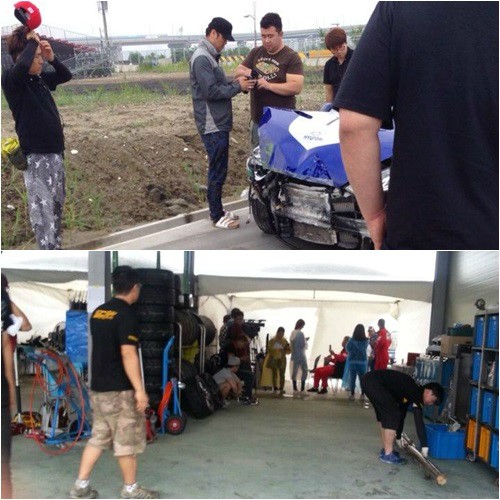 Yoo Jaesuk was reported to have been involved in a partial accident while practicing on a racing circuit for the racing episode of MBC’s Infinite Challenge.

The original racing practice date was scheduled on the 4th, however to avoid mass crowds from gathering, they had rescheduled it to be on the 3rd.

Unfortunately, the 3rd of July brought wind and rain, making the circuit much more dangerous to drive on.

The drift team “SynchroG” assisted the Infinite Challenge crew with the practice session and updated their official website with a photo that showed their followers the aftermath of Yoo Jaesuk’s accident, in which they wrote:

"Yoo Jaesuk just crashed the car during the practice! I don’t know if he’s okay!" There are a lot of accidents on Sondo’s city circuit since it’s raining today! (Guests may think it’s fun but professionals get worried…)"

Update!
Due to the safety gears and additions to the car he got out safe.”

Soon after, they added another photo to update their followers of the situation, in which they wrote:

"Infinite Challenge’s Yoo Jaesuk is alright! Here’s the crash site you’re seeing through our official site! The man standing in the red suit is MC Yoo! The person sitting down is Jeong Junha and they’re laughing and playing around so it seems like he’s fine!!"

A representative of the Korea Speed Festival revealed that Yoo Jaesuk ended up skidding while turning a corner on the tracks and came to a collision with the safety walls. Immediately after the crash, Yoo Jaesuk was taken to hospital for examination, and fortunately he had no injuries.

Also, the customized Hyundai Veloster he had been driving was taken to a mechanic to be fully repaired for his race this coming 5th of July.

I hope he's really all right and doesn't force himself too much.