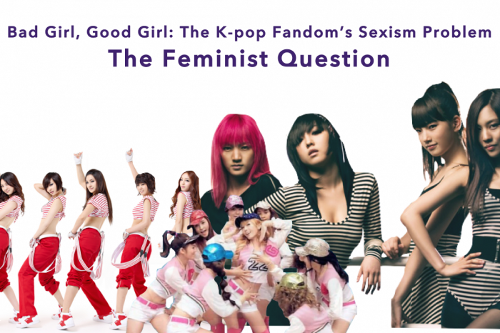 Back in 2008, in the dark days before 1080p YouTube videos, I watched Girls’ Generation’s “Kissing You” video for the first time. I didn’t know the group, let alone care about them—I was a new Super Junior fan eager to watch Donghae’s cameo—but the cheesy sets and fairy-tale outfits quickly won me over. After years of choosing to listen to all-male bands, it was refreshing to see and hear girls my age that I could relate to. By the time “Genie” came out, I was a full-fledged superfan.

It didn’t take me long to find out that being a girl group fan—or a fan of any female artist in the K-Pop world—was vastly different than supporting a male group. While the pelvic thrusts and shirt-ripping of male groups like Big Bang and 2PM were lauded in the online K-Pop communities I frequented, “Genie” drew criticism for having a “simple” dance designed to show off SNSD’s legs. When “Oh!” came out six months later, the girls were suddenly “too infantile.” Instead of having fun, I spent most of my early fandom days on the defensive.

In this way, being a socially conscious fan of female artists reflects, on a smaller scale, the experience of being a woman in modern society—constantly defending yourself and others from sexist criticism while fighting for your voice and place in the world. Last decade, I didn’t yet have the vocabulary or education to dissect the misogyny in K-Pop and its fandom. I do now. The standards and fandom attitudes surrounding female Korean artists are undeniably harmful—and easy to expose.

While feminism itself is still a controversial concept, as the dozens of female celebrities renouncing it demonstrate, watered-down messages of female empowerment are gaining traction in global pop culture. Companies such as Dove, Nike, and Pantene have challenged sexist ideas and promoted body acceptance in their advertising, but women writers have posed an important question: Are these messages still progressive when delivered through largely male-controlled corporations to make money? If Dove’s sister companies use sexist advertising and Nike exploits Asian women for cheap labor, does it matter if they tell some women to love themselves?

Similar questions take center stage in discussions of feminism among female artists in K-Pop. Can we truly hail female artists as progressive when men control so much of their image and product? Is it feminist to sing about love? With cultural appropriation and colorism so rampant in K-Pop, is it possible to be progressive at all?

These are important, difficult questions, and this discussion can’t and shouldn’t be limited to this article. The cultural appropriation seen in videos like CL’s “The Baddest Female” and T-ara’s “YaYaYa” can’t be ignored, and neither can the blackface and mocking of dark skin by men and women alike on variety shows. For example, in the video below, Yuri of Girls' Generation is mocked for having darker skin as a differentiator from her other members.

Are there songs, videos, and even performers that aren’t feminist in K-Pop? Definitely. Too many videos show makeovers involving dramatic weight loss, extensive makeup, or cosmetic surgery as a way to raise self-esteem or get a boyfriend, Hyomin’s fat-shaming “Nice Body” being just the most recent. Other videos encourage girls to fight over men, and even miss A’s “I Don’t Need A Man” shames “other girls” who don’t earn their own money. But there are still glimmers of progress that deserve our attention.

It’s still true that Korean entertainment companies are widely controlled by men, some of whom, like Open World Entertainment’s infamous CEO, exploit their female artists and trainees. Many of the industry’s top composers, including Shinsadong Tiger, Brave Brothers, Teddy, and JYP, are men. Even in this male-dominated industry, however, there are women making their voices heard. Like their male counterparts, idols such as IU, CL, SPICA, and SNSD are receiving opportunities to compose and write their own music. Kenzie has worked under SM Entertainment for over a decade, writing dozens of their hit songs and “One More Chance”, an underappreciated but undeniably feminist track promoted by The Grace’s Dana and Sunday. There’s also Kim Eana, a lyricist who’s worked on almost all of IU and Brown Eyed Girls’ most recent hits, as well as Ga-in’s “Irreversible” and “Bloom.” Many of these female-written songs, of course, are about heteronormative love, but they’re about love and sexuality from a woman’s point of view—a perspective pop culture sorely lacks.

The abundance of girl groups in K-Pop also provides a venue to celebrate female friendship, something our society doesn’t do nearly enough. Whether it’s the loving birthday messages members write one another on social media, the hugs and cakes groups share at concerts, or even attending each other’s solo activities and school graduations, female idols constantly make grand gestures of support and love for one another. When tabloids attempted to pit the Wonder Girls and SNSD against each other in a battle for K-Pop dominance, the two groups repeatedly asserted their close friendship. And as Lee Hyori mentored SPICA, she taught them to play a game where each girl had to compliment herself, and if she couldn’t, she lost. These gestures of self-love and friendship lead female fans by example, showing how they can combat the constant messages from mass media that women should be insecure and fight one another for the attention of men. Like any public figures, female artists aren’t politically perfect, but many of them still send important messages.

It’s for these reasons—and many others I don’t have the space to explore—that female artists in K-Pop deserve your respect. Faced with a sexist global society that criticizes their every action or inaction, in addition to the forces of colorism and neo-colonialism, female artists are some of the most influential and lucrative players in modern K-Pop. And with progress continuing worldwide, the power of these artists, whether in the recording studio or in the conference room, will continue to grow.

OP's note:
The article doesn't cover everything but it's a good start for a discussion.
One thing that bugs me the most about k-pop is that sex sells (we all know that), lots of girl groups do sexy concepts (some willingly, others, not so much... which itself is an issue); but those same girl group are bashed and insulted for giving the audience what it wants: SEX. And it's not just k-pop it's entertainment in general. You're not relevant until you're "sexual" but then you're a "relevant slut". And considering how young some of the idol are, it is a real issue. On one hand they're asked to be "saint", but on the other hand they should be ready to "sin" to be popular.
Either way, I know the previous article was a bit of a mess, but I thought this could make for an interesting discussion.
moonrok, macheretaengoo's channel, 1theK (former LOEN MUSIC) , SMTOWN
Tags: cl, cultural insensitivity / racism, ga in, girls generation, iu, lee hyori, miss a, op-ed, sexism, spica, wonder girls
Subscribe
Previous
← Ctrl ← Alt
Next
Ctrl → Alt →
Previous
← Ctrl ← Alt
Next
Ctrl → Alt →