The newly released music video features a highlight reel of the “Roommate” cast members having fun in a water fight and other never before seen footage.

The song is perfect for the summer season, with singer A.T’s refreshing voice, matched with the video clips of the 11 cast members enjoying a pool party, fishing at a river, bungee jumping, as well as having a water gun battle in their backyard.

“Good Morning” was produced and written by Yoon Jong Shin, and arranged by Jo Jung Chi. Additionally, A.T, who earned recognition through KBS 2TV’s “Immortal Song,” lent her soothing voice for the OST.

Along with the release of the MV, a brand new group photo of the cast members was unveiled. 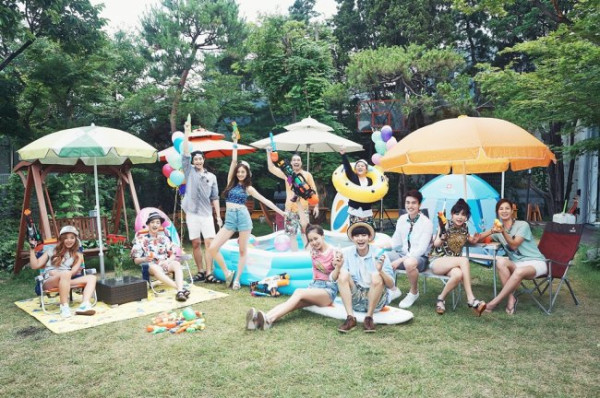 I say finally because they've been playing it since ~Episode 6 I think MV is half water gun fight, half sort of preview for next ep?

You might remember A.T from when her MV for Melancholy was posted on here, She also has one of my favorite MVs of all time, "Don't Be" (feat Geeks) that I highly recommend!
Tags: 2ne1, actor/actress, exo, lee dong wook, music video, orange caramel, park bom, tv shows, yoon jongshin
Subscribe