“The Mermaid,” which has its first broadcast on August 7, is based on the fairy tale of the same name and replicated the romantic kiss scene, which is already moving the hearts of women.

In the picture, you can see the mermaid (Jo Bo Ah) sharing a electrifying kiss with a normal human male (Song Jae Rim) in the water. Song Jae Rim is sure to make fans’ hearts flutter come the first episode when he grabs Jo Bo Ah’s waist and pulls her in.

“The Mermaid” director Baek Seung Ryong revealed his feelings, saying, “Jo Bo Ah had to do quite a bit of underwater scenes, so she has worked hard. Despite shooting for over 14 hours, she continues to film with a bright expression. Thanks to the actors, a good drama will come out despite the difficult filming.”

Meanwhile, “The Mermaid” will air a special on July 31 at 11 PM, a week before the premiere. The special will contain what the actors think of the drama and behind-the-scenes material. 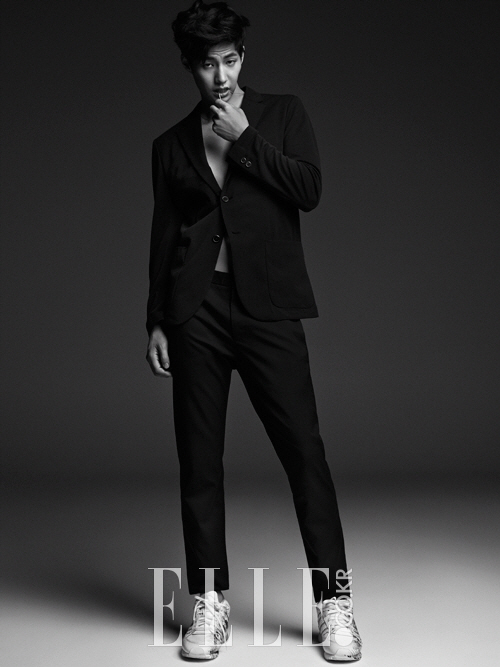 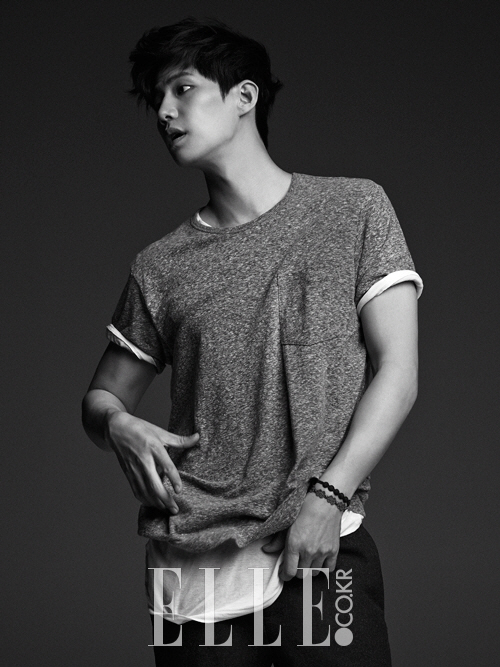 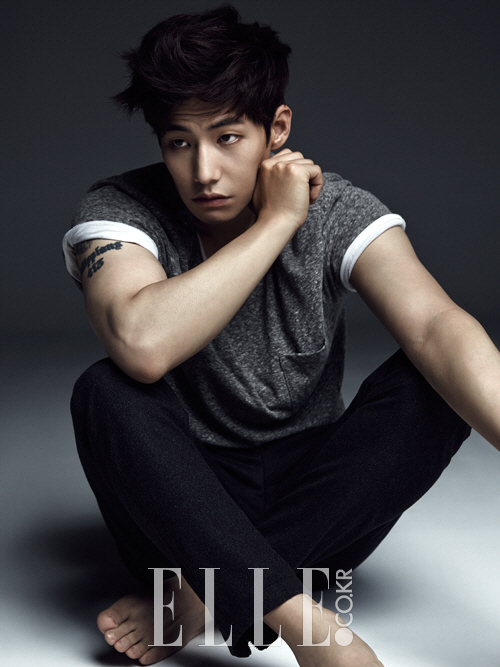 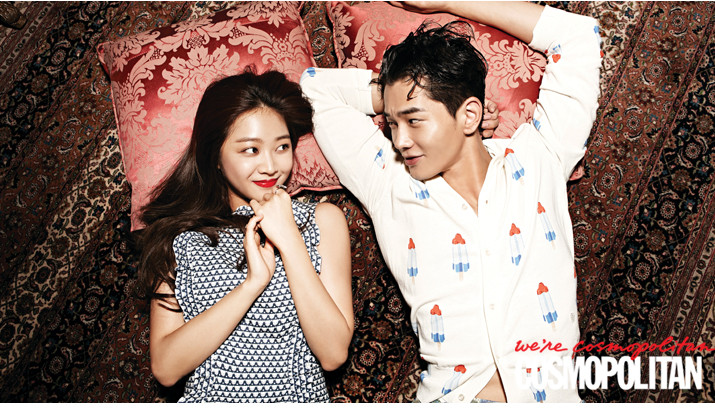 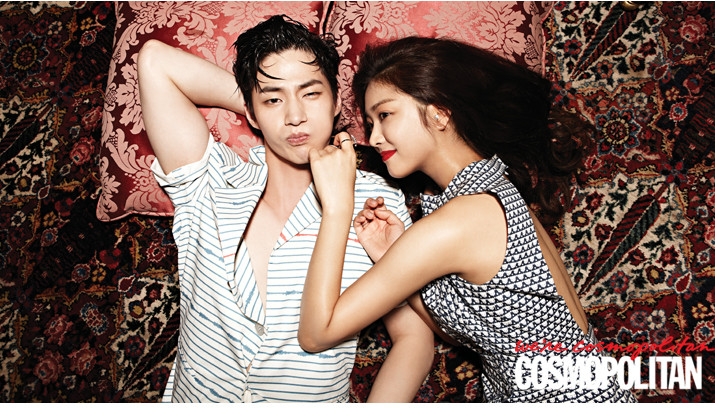 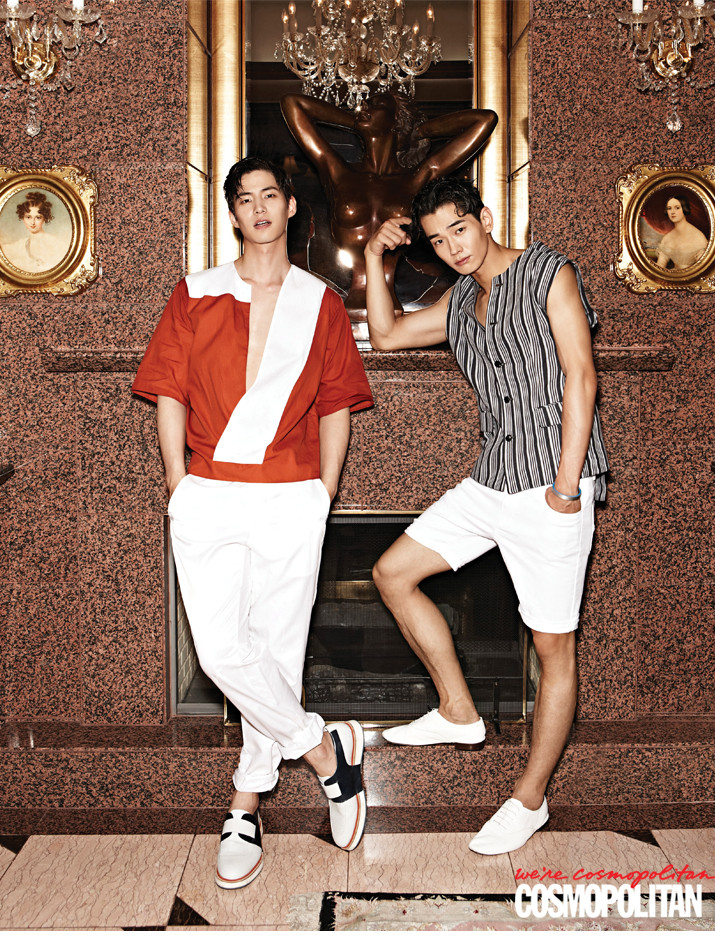 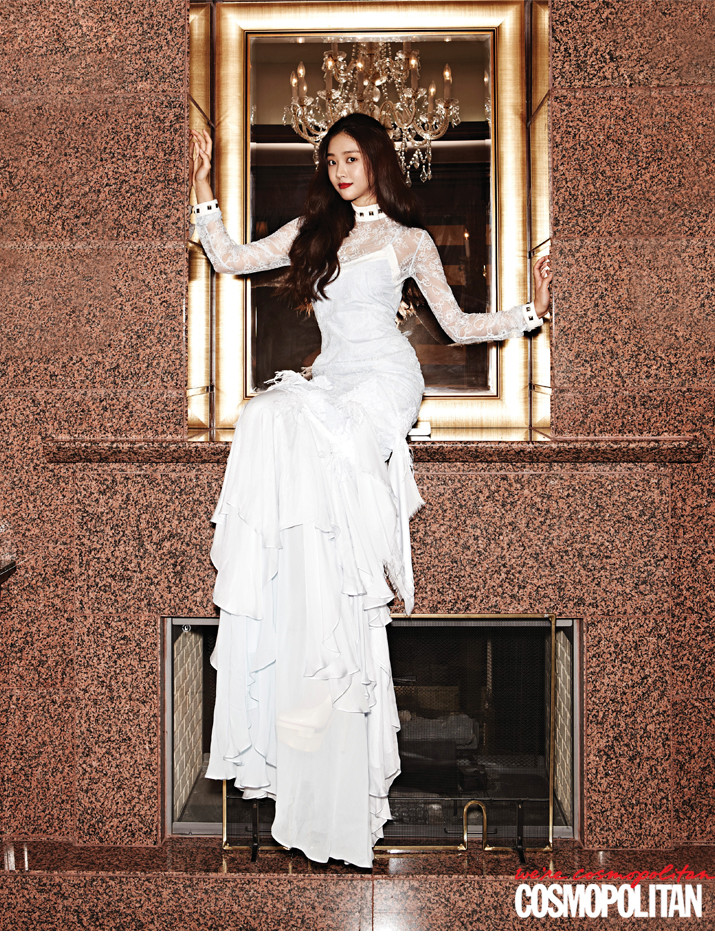 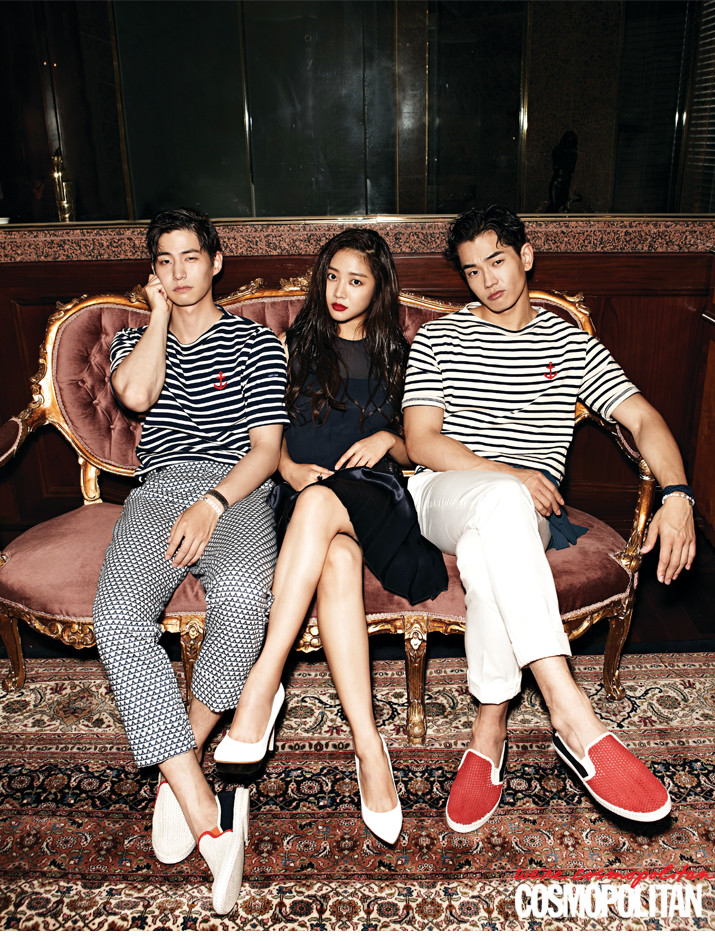 Did you like today’s photo shoot? We used the drama’s plot and went for the “Mermaid and her two marine boys” concept.

Song Jae Lim: I like it. But am I not a chef (in the drama)?
On Joo Wan: Ya, if you’re nipticking like that, that makes me the guy looking for a job!

I watched the reading script video, the atmosphere looked great!

Jo Boa: That’s because the script is very funny.
On Joo Wan: Why? If the plot is unrealistic, you can’t relate to the drama, if it’s too realistic, it can’t be funny? Our drama is a good mix between these different elements. It’s a fairty tale that people dream about, the perfect guy, a group of young people looking for a job and a story reflecting the real world… I think we’re the ones we can pull it off if we act well.

I heard the story is about a mermaid who found love and became human. She joins the “Surplus House” which is a share house full of people looking for a job. When I read the title which was “Surplus Princess”, no other word came to my mind but “funny-sad”. The beginning is like a story for children, but is it a dark comedy that reflects the harsh reality?

Song Jae Lim: There are dark comedy elements. You know how we call our generation the sampo generation because we gave up on relationships, marriage, having kids because of unemployement. If “Reply 1994″ was a drama about the previous [young] generation, our drama is about the worries of this current [young] generation.
On Joo Wan: As someone who plays an unemployed person, I don’t want to call our drama “a dark comedy”. When I first received the synopsis, it was a romantic fantasy story, but it was able to show things that our generation can relate to. I thought that this bright and hopeful character can be an endless source of courage for these people.

However, it’s hard to find a job these days,so isn’t “Si Kyung” a very hateful character because he left the best medical school in the world to become a chef?

Song Jae Lim: If he were just to become a doctor, it would be pointless to shoot this drama. Honestly, “Si Kyung” managed to enter this medical school, but he couldn’t keep up with the course. That’s why he became a chef. Hus educational background with him being a former med school student makes him popular.

In each one of your recent interviews, you said you wanted to shoot a rom-com, looks like your dream came true…

Song Jae Lim: I really needed a change and this good opportunity came to me. I’ve been shooting various dramas until now, but the image stuck in people’s heads is this warrior image like Woon in “The Moon Embracing The Sun” or “Mo Il Hwa” in “Inspiring Generation”. This time, I play Si Kyung who is conceited and obnoxious. He’s also someone who carries a deep pain unknown to others.

When you were taking pictures with On Joo Wan earlier, you said “my chemistry with a guy is erupting”. You’re famous for the good chemistry you show with your male co-stars, right?

Song Jae Lim: Indeed. However, the chemistry with an actress this time around… It is okay for you to also look forward to it. Haha. I was told that my fate was to have many women coming back to me once I’m over 30. Now that I’m actually in my 30′s, I do work with a lot of women.
On Joo Wan: Aren’t you Christian? You even have a line of the Bible tattooed on your forearm.
Song Jae Lim: That’s how my fate came out, you know? So I guess that’s why I have much more scenes, including kissing scenes, with women now. It’s the same with the movie “Salmon” [t/n: 연어] I’m currently shooting. It was the same for Zang Li Yin’s music video I shot not long ago.

On Joo Wan: It was great for me to play a light and joyful young character running toward his dream because I had only played characters who were completely different from my real personality. I was in the one-act drama “Illegal Parking” that was broadcast not long ago. It was directed by the one who directed “Sword and Flower”. He said he thought about me for this role because he was looking for someone to play this indecisive shy loser in a way that has never been done before.

Speaking of which, Jo Boa, you’ve played heavy roles for a rookie and it seemed you had a rough time as an actress. That’s why I thought the three of you must have been very happy to be in this drama when I heard about the news.

Jo Boa: Just like you said, the characters I played since my debut weren’t very light characters. However, Ha Ni (the name the mermaid princess Aileen receives in our world) comes to the human world she’s been yearning for and everything is just new to her. She’s very similar to me in many aspects.

What did you think when you heard about each other being cast for this drama?

Song Jae Lim: To be honest, when I first heard that Joo Wan-hyung was cast as Hyun Myung, I thought it was a bit odd because he’s quite charismatic, you know? He has this dandy style. I thought he didn’t match the role because Hyung Myung is a “loser” looking for a job.
On Joo Wan: I thought Jae Lim was perfect for the role of Shi Kyung. He has the “hardware” for the professional and cold character.
Jo Boa: I was the one who was cast last among the three of us. I thought their characters would be the opposite of their usual images and the drama will be exceptional for viewers. When we did the script reading, they were unexpectedly good. Their personality is actually reflected in their characters.
On Joo Wan: It’s reflected a lot. Haha.

Boa, during the press conference, it is obvious you will get the unavoidable question. Between Si Kyung and Hyun Myung, which one would you like better in real life?

Song Jae Lim: Look here. First of all, I’m younger than Joo Wan. My body is better than his.
Jo Boa: Well, I don’t know… Because these two characters aren’t simply obnoxious and conceited. They both have their own charm and I feel sympathy for both of them and the pain they hide.

Comedy is an important aspect of this drama. Do you try your best to go crazy?

Song Jae Lim: I think it will get crazier with each episode. We’ve had the scenario for the first 4 episodes so far. Things will get more intense as time goes by because it’s a “16+x episode” drama.
Jo Boa: There are 15 episodes!
On Joo Wan: Isn’t it “14 + x” episodes? By any chance, do I die in the 13th episode?
Song Jae Lim: Will Joo Wan become a mermaid instead?

As actors who debuted 3 years, 6 years and 11 years ago, what is your biggest worry these days?

On Joo Wan: Listening to this number makes me feel old. Haha. When you see how much I’ve been working since my debut 2004, I’m not that far from veteran actors. However, from the viewers’ point of view, I’m still not an actor who gives that “trust”. Ratings or box-office results aside, I want to become an actor who makes people think “he will do a good job”, regardless of the role.
Jo Boa: I really want to meet characters that will allow me to show my regular self. So the theme can be realistic, but it’s good that I was able to meet a character that can really dissolve my usual image.
Song Jae Lim: I see acting as my job well as my livelihood. It’s my path and it’s my job, so I will definitely go down that path, regardless of the time it will take. You know how men when they reach 30 make extended plans because they got a job, so they get married, they get an apartment mortgage, they become fathers? Once I turned 30, I also started thinking about marriage. Before, my heart was closed to new relationships. Now, I want to keep the door open and enjoy life. There’s room for this in my life.

Dating is good, but I think “dating” is quite hard for the young generation. Do you have any love advice you’d like to share with those who are having a hard time to find someone?

Jo Boa: Love? I want to find “sincere love”. Adults say you must date a lot in order to figure out who’s good or bad. But I want to meet someone who is sincere and be serious about the relationship.
Song Jae Lim: Don’t people say “great guys are everywhere”? Haha. I have my own values when it comes to dating. Don’t start a relationship out of instinct or out of the desire to possess someone. If you really want to have a valuable relationship, don’t get into a relationship just for the sake of it. I don’t want to start a relationship out of thirst or loneliness. I believe in destiny.
On Joo Wan: I personally hope that people don’t seek advice from others about who they should like and who they should see. Like “this guy did this to me, shoud I break up or should I keep seeing him?”. Regardless of what people around you say, you can do nothing but follow your heart. This is what love is. Of course, I do ask my friends about stuff like that sometimes, but it’s not to help me solve my problem, it’s to release the stress.

Song Jae Lim: Asking about the ending when we don’t know how many episodes there will be is a bit too much? It’d be great if Hani ends up with me, anyway. Haha.
On Joo Wan: Well, even if the two of you get together, wouldn’t it be a happy ending for me if I find my dream?
Jo Boa: Even if it’s not love, I hope all the characters have their dreams come true. Hani came to Seoul because she fell in love, so whoever it is, I hope she will find love.
On Joo Wan: She will find love, but the real question is, who will it be?