Seventeen For Sports DongA and Starnews 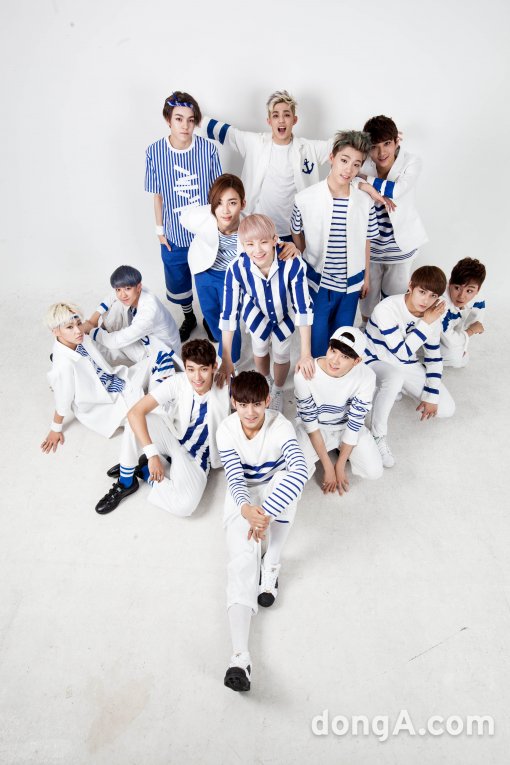 [Interview] Seventeen “We are going to break the prejudice of groups”

Although they say they are used to having idol groups appearing with over 10 members such as Super Junior, EXO, etc., having a double digit number of people in a group is rare.

An exception from the pioneer SM Entertainment, trying to find a large group who has been successful is very difficult.

In this situation of boldly throwing out an announcement of a “13 member group”, Seventeen is the main character who Pledis launched, greatly known for After School and Orange Caramel.

Truthfully, among the mania of idols, Seventeen is a name that was quite known before debut.

They showed the difficulties of being a part of a large member project from the start until now, and multiple contents such as a debut project and other related news.

However, these kids weren’t able to debut as quickly as they thought. After four years have passed, they were able to put out a CD with their name on it.

The oldest, S.Coups, explains the reason behind their late debut, “I think it’s because as time passed, our company saw us slowly develop which increased his anticipation,” also “Truthfully, although I am not entirely satisfied, I’m now able to show something to an extent,” showing his modest side.

With the long preparation and the postponed debut, there have been difficulties from them. Hoshi and Seungkwan expressed, “Sometimes, when there is news or an article relating to our debut, our family or friends would always ask this question, and whenever we received this question, it was very difficult (to answer). We would answer with ‘we’ll debut soon’ and occasionally avoid going home during holidays. It felt like we were living the life of a student preparing for job employment.” (T/N: In Korea, as of now, it is very difficult to become employed after university so many students study extra years to become employed)

They also thought, “I think the company also had thoughts such as ‘let’s save them for later’. Truthfully, when they told us we couldn’t debut in the past, of course we weren’t happy, but now after debuting, we realized they’ve held us back in consideration of us,” showing a mature side.

Although S.Coups informed us, ‘We’re worth to show’, Seventeen has been polishing their strengths for four years, which shouldn’t be overlooked.

Like the title “Self-Composing Idol”, Seventeen writes and composes their own songs as well as choreographing. They have entirely, for the most part, participated in the creation of the album and the character concept for their promotion.

Woozi, who’s put his name up as the composer of most of the album, said, “Initially, we were preparing to become an ordinary idol group,” and added, “And suddenly, we changed the system to become idols who self-compose everything.”

While the leader of the performance team, Hoshi, revealed, “At first I thought ‘why aren’t they debuting us’, so during that time (predebut) I’ve been creating choreography to pop songs and writing songs, and the company saw this and thought ‘this seems good’. So starting then, we held onto the concept of “Self-Composing Idol” and debuted with preparation.”

Although these self-composers started out as “a game”, their finishing product, compared to any other group, does not lack.

Their debut track ‘Adore U’ has a significantly addicting melody and a light sound when speaking in musical terms while performance wise, the dramatic-like choreography dazzles and is suitable for 13 members that one cannot take their eyes off of the stage. 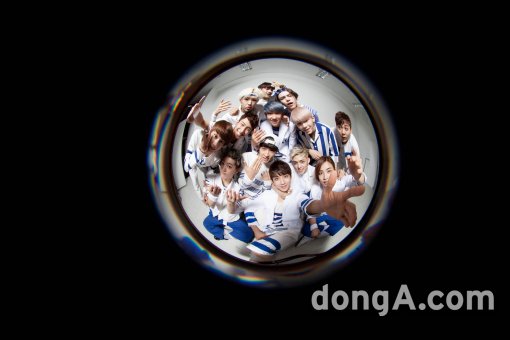 Woozi explained, “I studied classical music ever since I was little, and then entered the company, which expanded my musicality. I played the clarinet until junior high school but changed my pathway from it because I didn’t have fun playing it,” and added, “I’m the type who would write and compose songs and sometimes collaborate with the members of the hip-hop team.”

Even though he hasn’t officially learned how to dance when he was little, Hoshi expressed his interesting opinion as a Taekwondo player “I use my body” as a reason to join the team which is very different from Woozi.

Hoshi said, “I was a (Taekwondo) player until the 6th grade, sweeping the National Championships and was even scouted in junior high school. However, most athletes cut their hair very short. Because of puberty, I didn’t want to cut my hair so I just gave up going towards the pathway of sports/exercise. Then I challenged myself to become an idol and now debuted. I still have Taekwondo flowing in my blood,” Hoshi explained his wacky reason which brought laughter.

Seungkwan of the vocal team, who was listening to the hip-hop team leader’s history, suddenly jumped in, “Ever since the 1st grade in primary school, he (Hoshi) participated in the children’s singing contest and his school won 1st place for 6 consecutive years,” filling the room with laughter.

It might be a little late, but it is necessary to look at the configuration of Seventeen.

“Seventeen was going to be 17 members, and there were up to 30 candidates, and while preparing, there became 13 formal members,” Seungkwan truthfully reveals.

“After the final members were decided, the CEO gave each of us and award and a ring,” Woozi tells us, “I still vividly remember the moment I received the ring.”

“During our reality program (Seventeen Project), the CEO took away our rings. I thought that he would give it to us during the broadcast, but he really didn’t so I was very flustered,” Hoshi added, causing everyone to laugh.

After many twists and turns, Seventeen has tasted the sweet taste of debut, and happily spend their days even with their busy schedule.

“Because of the predebut reality project, we’ve already faced a really tiring schedule, so the schedules with music programs felt much easier,” Jeonghan revealed, as he explains that their schedule isn’t as tough.

“To be honest, even though I’m tired because I don’t sleep, going to music programs itself makes me so happy, and because I debuted, I don’t know if I’m exhausted or not. When we were doing the reality project, I worried about if I was going to make it or not, and I was even more tired than usual,” Mingyu added, unable to hide his happiness of debuting.

However, because of the huge amount of personnel, there are some unexpected difficulties that occur, like when they sign CDs.

S.Coups and Woozi elaborated, “It was amazing that we even had a fansign event. However, because there were so many people, it looked like they were working at a factory.”

“Before we debuted, we all made our own signatures and while making them pretty, little characters appeared. But, because of the huge amount of CDs to be signed, the characters started to disappear from different places,” Jeonghan added while laughing.

As soon as another story came out about the fansign, the youngest Dino suddenly started coughing and looked at the other members, who immediately responded that “Dino’s signature is the prettiest.” I’m not quite sure if it’s a sincere or a forced praise.

Dino, who heard the answer he wanted, “My name, Dino, represents how I want to dominate the stage. I didn’t know how to represent this, and I talked with my father. His dream was to be an artist so he draws well. So, I combined the image I thought of and my father’s drawing to make my signature. It is very meaningful to me,” bragging about story behind it that he revealed.

Seventeen enjoys the happiness debuting brings, but they are not settled in yet.

Like a self-composed idol, Seventeen has not only finished the completion of their next song, but have activities with each unit or are mixed up into different teams to aim for fresh debuts.

Seungkwan and Woozi are looking into the future, “There are some prejudices against groups with large amounts of members, and we want to be the group that breaks those. If you look at our stage from start to finish, not one member has a chance to rest. We want to convince the people as to why we need 13 members,” they announced.

“We are filling the stage with only our members and have our own synergy. By utilizing these advantages, we want to take Rookie of the Year,” S.Coups said, adding a rookie-like goal. 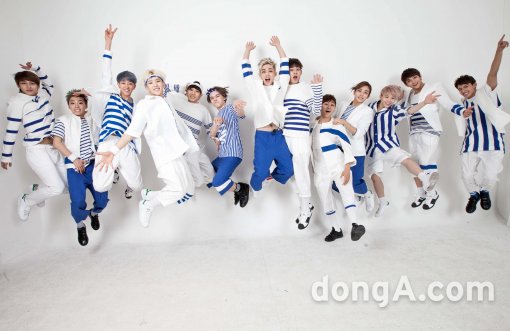 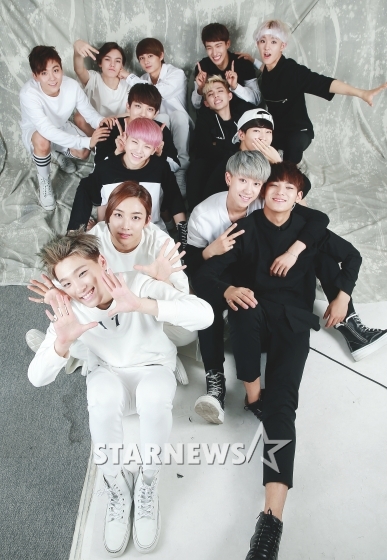 “Whenever we have a music program, we go to the hair shop at 2 o’clock. Not in the afternoon but in the morning.”

There is a hot interest in the most recent debuted rookie group, Seventeen (S.coups, Jeonghan, Joshua, Jun, Hoshi, Wonwoo, Dokyum, Mingyu, The8, Seungkwan, Vernon, Dino, Woozi). Seventeen had an interview with StarNews on the 8th, talking about their promotions as an artist after a long trainee life.

Since there are so many members, they had many unique stories while traveling as a 13-member group. It is normal to wait 30 minutes to wash at home and travelling around by at least 2 vans.

When they have prerecordings for music programs, they start their schedule at the time when people are asleep.

Seventeen said “Whenever there is a music program, we go to the hair shop around 2 or 3 o’clock. In the morning. We usually don’t sleep on those days. Since we have so many members and take an immense amount of preparation time, we all wake up early and start our day.” (On this day, it took about an hour for the Seventeen members to finish the photoshoot for this interview.) 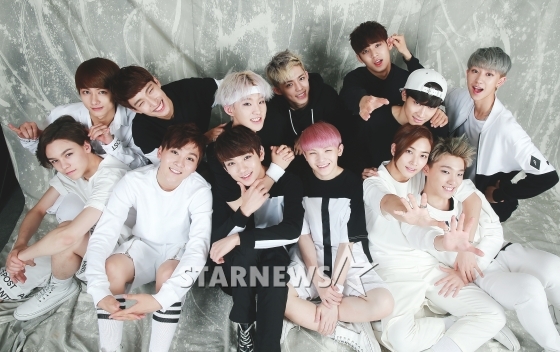 Seventeen confessed their difficulties of having so many members.

“When we’re eating and everyone wants a bite of it, they take a bite and all of it disappears”(Hoshi), “We run out of commodities really quickly in the dorm”(Jeonghan, The8, Woozi, Wonwoo, S.coups, Seungkwan, Mingyu), “The bill for food is really high”(Joshua), “When we’re out (in public), we go to the bathroom in groups of 3″(Dino), "It’s tiring when cleaning”(Jun, Vernon), “Since there are so many people, we sometimes forget and leave a member”(Dokyum) and so on, their everyday lives consisted of going through these experiences anyone can face when living together.

However, they expressed that there are more benefits than disadvantages. First of all, there isn’t a second when they are bored, also they like being able to show a unique performance and energy by having 13 members. Above all, they became good colleagues and competition because they all had the same dream that they wanted to chase.

Seventeen members expressed “Although 13 people can be a big number, we don’t think it’s big since we’re always together. If a member is missing, it feels like something’s lacking,” also added, “We want to go until the end together".

On the other hand, the meaning behind Seventeen’s name is that there are 13 members, 3 units, and 1 team. Like the meaning of the group name, they split up into 3 teams to plan out their multi-feature group: hip-hop team, vocal team, and performance team. On the 26th of last month, they have officially debuted as a rookie group on MBC’s Music at 6PM, with a one hour live performance. After glamorously debuting for a week, Seventeen’s ‘Adore U’ MV surpassed 1 million views, grabbing attention from the public.

The first article is quite an interesting read. I really shouldn't be surprise but I was kinda shock to hear that there were up to 30 candidates for this group.
Source: Sports DongA , StarNews