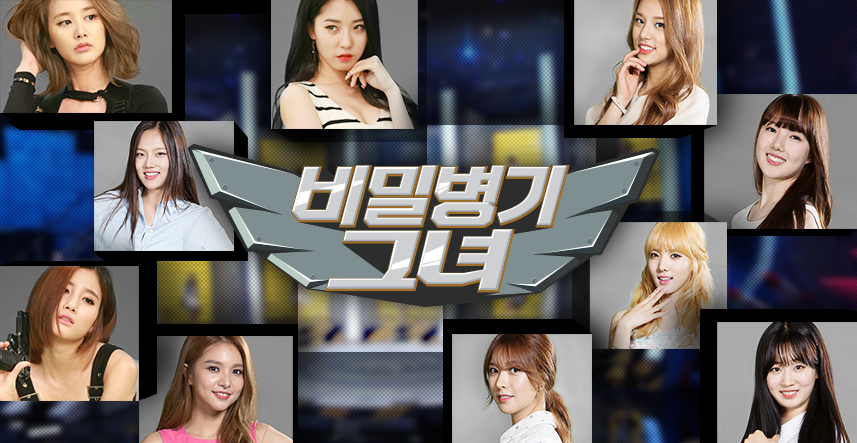 10 girl group members compete in weekly missions based on a celeb role model, judged by a panel of 10 'holic' fans.
The winner of each episode gets to be filmed by professional fancammers.
The overall winner of the show will appear on Weekly Idol with her group.
@mbcgirl2015 | @ScrtWeaponUpdt

fantakens from the filming: The Studio

ROUND 1a: Aegyo wake-up call video

MBC Every1 didn't upload the clips to YouTube (guess they want the Naver views) but here's a video of them menboonging over the mission lol:

ROUND 1b: Aegyo phonecall mission

They called their male friends in the industry and had 3 minutes to make them respond with "Why are you so cute?" or something similar.

MEOKBANG! They randomly selected dishes (1v1) and had 5 minutes to eat. The judges would then vote on who made their dish look more delicious.

Daeun has worked extremely hard on this show and this was another instance where she went all out.. she squeezed the juice into her mouth and even ate it with kimchi omg. watch it for yourself:

They filmed 3-minute videos with their family member(s) and the judges gave votes to the ones that exuded the most familial warmth. THERE WERE SO... MANY.... TEARS...... ;~; Solbin all-out sobbed, poor baby.. and Cao Lu's parents are in China so she went around Seoul with cardboard cutouts of them ;A; (ft. small cameo from Zhoumi and Jia). the entire cast, MCs and panel were crying.. SO. MANY. TEARS. Daeun recorded a song for her mom, really sweet :')

for some reason they didn't reveal the ranking for this round but Cao Lu had 28 votes and was deservedly #1 ;-;

They performed iconic stages (in teams) for a special audience of 20 soldiers and the team that received the loudest cheers (measured in decibels) won.


The remainder of the episode was a cast dinner and the cast were given gifts by the MBC every1 producers. Previously-eliminated Jei and Daye made a surprise appearance as their servers! :D

Minhee, Jisoo, Sihyun and Jei :D (I think of them as the Secret Weapon Mean Girls clique lol)

this post is so late...the show ended yesterday lol (ep12). these three eps were hilarious, fun and touching (and the final two were great too) it's come a long way from the first few shitty eps. I miss the cast already :(
Tags: bestie, fiestar, hello venus, keembo/spica, laboum, mbc, stellar
Subscribe

thank you <3 did anymore eps get subbed in english? i know the 1st 2 did but i havent really followed up D:

also, did they like only allow in 3 fansites for the whole of the show?