One size fits all in South Korea, as long as that size is small

By Maxine Builder for Racked

Seoul is quickly cementing its title as the next major fashion capital, hurried along by the city’s reputation for perfectly executed street style and legendary shopping. Only in Seoul can you wander into a subway station-slash-shopping mall at 3am and find people browsing through racks of faux suede trench coats and knitwear coordinates, all costing less than $30. The city makes it easy for fashionistas to stay ahead of the newest trends, as long as these women wear the right size.

Most stores in South Korea are "one size fits all," and that one size is small, as in designer sample size small. Finding clothes larger than a U.S. women’s size 6 is challenging, especially since the starting point for "plus-size," or extra-large, is a Korean size 66, the rough equivalent of a U.S. women’s 8.

This difference in definitions makes plus-size Korean women invisible to most foreigners, who are used to "plus-size" starting at a U.S. size 14. As such, a lot of the complaints about plus-size Korean fashion are from ex-pats, often as angry blog posts or annoyed YouTube videos. The discrepancy is chalked up to demographic differences and embarrassing episodes of being snickered at by salesclerks when asking for a larger size are shrugged off as cultural misunderstanding. An American woman living in a suburb of Seoul told me, "I’ve gone into some store and someone’s been like, ‘Oh, no. No size.’ I just walk in and they start telling me, no. They don’t have my size." (I have also been shooed away from stores in Seoul. I generally wear a U.S. women’s 6.) 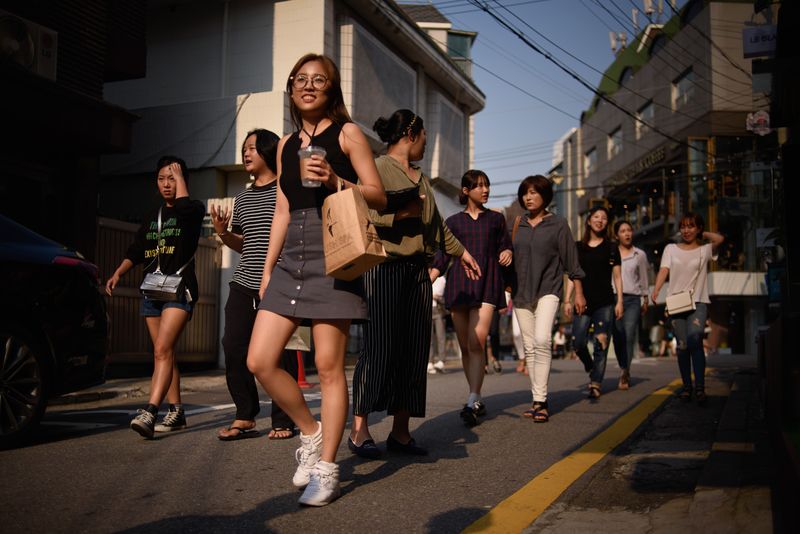 These experiences lead most foreigners to conclude there just aren’t as many plus-size Korean women as there are in America. And though sweeping statements about body size are rarely accurate, there is some truth to that sentiment. South Korea has one of the lowest rates of obesity in the OECD, and a recent study found that only 4.2% of Koreans are clinically obese. Compare that to the 34.9% of Americans who are obese.

Rather than accept their bodies as they are, "plus-size" Korean women face constant pressure to lose weight, even if they wear a U.S. 6. One of the most-maligned culprits for perpetuating this unrealistic beauty standard is the omnipresent K-pop machine. According to James Turnbull, a writer on Korean feminism and pop culture who blogs at The Grand Narrative, "There are almost no average-sized female K-pop stars." This matters when these idols’ images are plastered on every TV screen and billboard. Turnbull estimates that approximately half to three-quarters of all advertisements are celebrity endorsements.

"Time and time again, I see opportunities for Korean entertainment companies to take some plus-size woman… or just someone different, and celebrate their difference. But they just don’t do it," said Turnbull — because that skinny, sexy look sells. "It doesn’t give them any incentive to take that risk, and that’s why we get the same again and again."

One of the few voices speaking up for self-acceptance in Korea is Vivian Kim. A plus-size model, Kim founded 66100, Korea’s only magazine dedicated to plus-size fashion and body positivity, in 2014. "No one wants to say, ‘I am plus-size,’" Kim explained. "There are so many women who wear 66 in Korea," the bottom threshold for what is considered extra-large. "But no one tells their size as 66. They don’t want to be 66," she continued.

To be categorized as "plus-size" in Korea is something about which to be ashamed, and most plus-size clothing reflects that stigma. A plus-size American writer who lived in Seoul for nearly six years described the options for plus-size women as, "garbage, acrylic nonsense that they markup."

It is possible to find more traditionally feminine clothing in larger sizes, but it requires a bit more legwork and planning. There are several "Big Size" clothing stores in Itaewon, a foreigner-friendly neighborhood of Seoul, but these stores, with names like Bigtoria, have their own problems. Many stock more men’s options than women’s, and the women’s clothes still tend to cost more than their sidewalk counterparts. The "Big Size" label also perpetuates the stigma that bigger sizes are an aberration, to be kept separate from standard sizes.

Another go-to are the stalls tucked away in the alleyways of Dongdaemun, known for its nocturnal multi-level shopping malls. There are some plus-size stores in the mix but finding them requires some searching. Perhaps the easiest plus-size selection to find is in Doota, the neighborhood’s most famous mall, but with department store prices, that is a fairly expensive option.

These stores, with names like Bigtoria, have their own problems.
Rude remarks from salesclerks, combined with the simple lack of availability, force plus-size Korean women to look for clothing online. There are several domestic sites that cater to plus-size women, such as Gabig, gmarket, and 09women, but it’s also hard to tell how the clothes will fit on larger bodies since the models are straight-size. Plus, there’s no guarantee that what has been ordered is what will arrive, as the pictures and descriptions on these sites are often deceiving. Fabrics are flimsier than advertised, and the true size of the garment can vary wildly from what’s stated on the label, usually erring on the side of too small. Savvy shoppers turn to Western retailers, like H&M and Forever 21, which have brick and mortar stores in Seoul, or order from ASOS, which has more reliable sizing.

Though many "plus-size" Korean women would be considered skinny by Western standards, they still face a hostile, fat-shaming attitude in their own country that should not be minimized. In response to the lack of fashionable plus-size options, Kim, the editor of 66100, started her own clothing line, called Design by 66100. She felt there was "no really good plus-size black, basic dress in the country," that would be appropriate for interviews and business meetings, so she decided, "I have to make it, because no one’s doing it." The dress is currently sold online, though Kim hopes to open an offline store in Seoul soon so that plus-size shoppers can see the dress, and the line’s other items, before purchasing, and eliminate some of the guesswork inherent in online shopping.

Kim holds out hope that Korean culture will become more inclusive, and more companies will follow her example and make clothes that fit a wider variety body types, rather than expecting every woman to squeeze into a single, small size. "There are plus-size people in Korea," she said. "But in Korea, they’re just so old-school. It takes too much time to change."
Tags: body image, fashion
Subscribe
Previous
← Ctrl ← Alt
Next
Ctrl → Alt →
Previous
← Ctrl ← Alt
Next
Ctrl → Alt →