Which TWICE Member Does SHINee’s Onew Pick As His Ideal Type (For Today)? 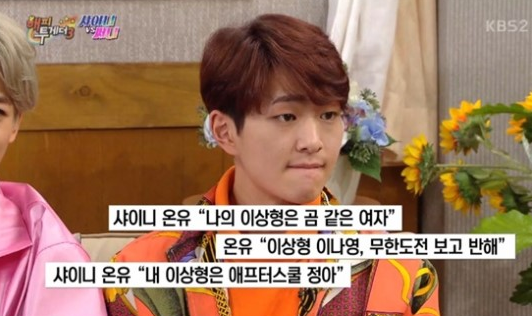 SHINee, who returned in early October with “1 Of 1,” guest on the October 20 episode of the KBS 2TV variety show “Happy Together.”

On this broadcast, Onew is asked who his ideal type is, to which he deftly responds, “My ideal type changes every day. It is to the point that I don’t even know myself.”

When asked who it is for today, he replies, “TWICE member Nayeon is my ideal type.” Yoo Jae Suk retorts, “During your interview with writers before the recording, you had said it was TWICE’s Tzuyu. It changed already!”

The other SHINee members cover for him, saying. “It is better that his ideal type is changing frequently than for his girlfriend to be changing frequently.” Onew then reveals that it has been two to three years since his last relationship.

flawless taste but yikes at tzuyu being 17
omona, does your ideal type change everyday?