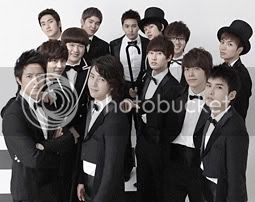 As Twitter goes global, so goes the Top 10 Most Tweeted Brands chart (look for it each Friday), a collaboration between Advertising Age and What The Trend, the social-media trend-analytics service. U.S.-based entertainment brands used to routinely bigfoot the Twitter "trending topics" list, but this week 13-member South Korean boy band Super Junior actually outranks "American Idol" (sorry, Simon Cowell), thanks largely to Indonesian fans tweeting their love. Partisans of U.S. pop culture can console themselves that pint-size crooner Justin Bieber (who is originally from Canada, but signed to the U.S.-based Universal Music Group) is still the most-tweeted entertainment brand (or brand of any sort) on Twitter, while the Jonas Brothers cracked the Top 10 once again -- but only because of Chilean and Argentinian fans begging the boys to visit their countries.

Cut a lot of the needless banter. Yay global SuJu Love! Very amused that my roommate [who found this article while doing her Advertising homework] emailed this article to me. LOL at the title though.

Yoon Eun Hye does a photoshoot for Beyond products, showing readers the uses of each product.

LOL Joon's mom is hilarious! But she's right. His back muscles are... O_O
Loved it when JoonDoong followed Mir back to his hometown.

2PM, troubled with the matter of ‘agreement’ about Jaebum’s permanent secession?

Note from the translators (2pmalways), as of ~6:30PMKST, 2/27/10: PLEASE BE ADVISED THAT THIS IS THE ONLY NEWS THAT COMING OUT FROM KOREAN MEDIA AS OF NOW. IT MAY CONTAIN FACTUAL ERRORS OR INFORMATION BASED ON PREASSUMPTION OF THE REPORTER.

2PM, troubled with the matter of ‘agreement’ about Jaebum’s permanent secession? One industry associate, “One member of the mean, at opposite ends with management company.”

Members VS Company, disagreements emerged at the 2PM fan conference?

On the 25th, news like lightning on a sunny day struck the celebrity industry, with the title of ‘Jaebum’s permanent secession’. Many have their eyes on the matter as management company JYPEntertainment (from now on JYPE) went on with the fan conference as scheduled.

At first, the fan conference which started at 3pm on the 27th at a shopping mall in Seoul’s Songpa-gu Moonjeon-dong, was scheduled for all 2PM members and JYPE associates, as well as 10 fan representatives, however as of now, 4:30pm, it is known that only 4 of the 2PM members are present. (ETA ~7:35PM KST: apparently all 6 are there now)

Brief Update, ~8:45PM KST (mods, I hope this is ok since the news bit itself is too short to constitute a new post?):

(Basically nothing we couldn't already surmise...)

Lee Joon really needs to be in a drama soon!

Trot group 삼 총사 (3 Chongsa, 3 Musketeers) who brought us 가자! (Let's Go!) comes back with the song 먹어 먹어 (Eat Eat, according to my limited Korean skills.) They performed their song on this week's Music Bank. However, it appears that their company is doing a terrible job of promoting them because there has been no news of their comeback. The song itself has yet to be released and because of the lack of news, I have no idea when it will be. For now, please enjoy the song!
( Collapse )

well....mods, I'm sorry for the lack of information. There is no original article to source. I wrote the little snippet that's up there since I couldn't find any information about their comeback. I did source the picture though. I hope this is okay. Sorry for the trouble.

After what seemed to be a calamitous weekend following the shock announcement of Jaebeom’s contract termination, you could have seen it coming.

Just like what happened last year following Jaebeom’s MySpace controversy, it was revealed that 2PM’s Taecyeon and Wooyoung will once again be relieved of their hosting duties on Inkigayo for the February 28th episode.

JYPE announced this through their website, in a short statement saying that they will not be fulfiling their MC duties this Sunday. Who could blame them, considering what has happened in the last 48 hours? For the time being, it’s only been confirmed that they will be missing for this Sunday.

There’s no announcement from the Inkigayo production team and at this moment, we can only assume that f(x)’s Sulli will be hosting the show alone.

As a follow-up to this post (which was just the first few media reports on the situation), we now have an account of what actually happened at the JYPE/2PM - Hottest fan meeting. Edited for grammar.

UPDATE #2: Translations/transcriptions of the Korean parts are beginning to surface; I posted one version below that dispels some of the other fan accounts. Please take this info at your own discretion though.

The author/translator is Korean-American and fluent in both languages.
( Collapse )

I just wanna say I ♥ Omona for being relatively sane and for being able to find humor in the situation still :D As for me, I don't care for dumb rumors/member-bashing and am supporting all 7 of them, whether they are apart or together. Good luck in your future endeavors, Jay!

Also, there are audio/video files of the conference going around but download/open them at your own discretion, guys. They may contain malware/viruses.

Here are the few fancams I was able to take at the 소녀시대 Encore Concert, that finished just a few hours ago. I wasn't able to get anything from the second half because security was so tight, and they caught my friend taking pictures so they watched our section like hawks afterwards.

First two or three are crap for actually seeing anything, but decent sound.

Also, during the solo's Heechul sang with Jessica for Barbie Girl. Sadly, no cams from that.

The Brown Eyed Girls are back in Singapore! B.E.G were in Singapore last December for Sundown Seoul'd Out Festival, and with so much love shown by the fans, they are back again for Sundown Zouk Live Party.

Kokokoreano always updates on Korean celebrities' airport arrivals in Singapore because it is the closest you can get, to see their street styles.

And here is the mandatory Brown Eyed Girls airport arrivals post. Huge thanks to our readers and twitter followers for these non-watermarked, beautiful shots of the girls.

The Korea article was wrong. The director of the movie posted on his me2day (korean version of Twitter) and explained that Siwon will not be in the movie (it seem like he was supposed to. Probably his drama schedule made it impossible).


"Journalists are truly weird. If they just give one call to the company they would know everything, I don't know where they hear these things from strange places. I felt sorry for Siwon who was going to appear in my movie "Quiz King" but then couldn't. Siwon! Next time let's adjust time together. Now for your drama, fighting!"
Original source Jang Jin Official me2day
Translated by Alice (`Whiteuk별♯♪) @ sj-world.net: ♥

I love these boys (and their spam) sfm.
And the fact that they act all cool even if their background is a trashcan... ♥
F.T. Island arrived in Taiwan on the 26th for a 6-day promotion tour that included a concert at the National Dr. Sun Yat-sen Memorial Hall. Although it was their first visit, over 500 fans welcomed them while the airport authority arranged for 30 security staffs to protect them. The members looked energetic and have 25 scheduled appearances planned for the 6 days visit.

F.T. Island enjoying their bubble-tea, but leader Choi Jong Hoon was apparently more thirsty than the others...

It was earlier reported that Wooyoung and Taecyeon will not be hosting Inkigayo this Sunday. However, it seems like there was a change of events, because Newsen has instead reported that 2PM is planning on continuing all their previous activities.

As you all know, JYPE held a conference for 87 Hottests to clear up rumors and answer various questions on February 27.

When asked to cancel all 2PM members’ activities on programs, a representative from JYPE said, “The members will continue to appear on all programs and the schedule will not be changed.”

A representative of SBS Inkigayo said, “Nothing has changed. [Taecyeon and Wooyoung] will appear as MCs just like any other week.”

According to a JYPE source who was at the conference said, “We openly discussed various rumors. The conference was longer than we expected because we tried to answer all questions. The members answered to the best of their ability.”

He also added, “We tried answering all questions related to the rumors roaming around on the internet from the company’s point of view. We tried to reveal what we could about Jaebeom’s personal life.”


4minute were guests on the February 27th episode of Kim Jung Eun Chocolate. The five members got to show off some talents then HyunA got to perform her hit song "Change". BEAST's Junhyung was unable to attend, so HyunA's backup dancer filled in.

i'm really loving maknae! i want her entire outfit~ and her dance moves look so fierce! even when bokgo dancing LOL and hyuna's backup dancer *_*

a) what in the world did they do to Injoon's hair. NO. b) I CAN TELL I LOVE THE SONG ALREADY

After just releasing their hot new teaser yesterday, BEAST continues to keep things interesting for their fans by dropping the tracks for their latest mini album Shock of the New Era.

The boys promised us a genre that was fresh and boy did they deliver! While maintaining a sound that is uniquely their own, the group offers us five brand spankin’ new tracks that range from their rock dance genre to smooth R&;B. From what I’m hearing, I’m definitely loving every single track!