They first met at a matchmaking party in April 2008. Like the other men, Jang Seok-do, 43, handed out his business cards to a couple of ladies. One was Kim Hye-young, 37. After the party ended they got back to their lives. A few days later, Kim said she suddenly got the urge to call a few of the men who had given her their cards, but most of them sounded as if they’d already forgotten the light-hearted party where they exchanged glances over tea and cookies.

Jang was different. “He was extremely pleased to hear from me because there was no way for him to contact me without me reaching him first,” said Kim, her accent betraying her birthplace in North Hamgyong Province.

It was the beginning of a romance between a South Korean bachelor and a woman from the North who had crossed the border. The party where the two met was organized by the city of Anseong, Gyeonggi, to encourage marriages between South Korean men and North Korean female defectors.

More stills have been revealed from the set of highly anticipated drama Athena: Goddess of War, which is also a spinoff of hit series IRIS.

The stills feature the leading cast members, Jung Woo Sung, Soo Ae, Lee Ji Ah and Cha Seung Won, all in scenes having to do with guns, action, and blood.

The crew visited various places in Italy including Vizenca, Padova, and Dolomites. They also recently filmed in Japan, and will be visiting 6 other countries to top it off.

The drama will makes its way to the small screens in November, so stay tuned!

The post about his mini album and pictures of his MV filming were already posted here. The tracklist for his upcoming mini album is:

Hwanhee also sent a message to his fans from the set of the filming of his MV [no subs, sorry]:

And of course, the highlight of this episode was the Infinity Challenge crew undertaking the mission of becoming idol stars. They headed over to SM Entertainment that day for auditions.

Cute audition clips of trending idol stars were revealed through this episode as well.
( Collapse )
source: GarakHolic2 and allkpop

@2amseulong
A few days ago, actually, he just learned how to upload pictures today, though.
Was confirmed by Kwon and ~Hitman~ Bang.
( Collapse ) 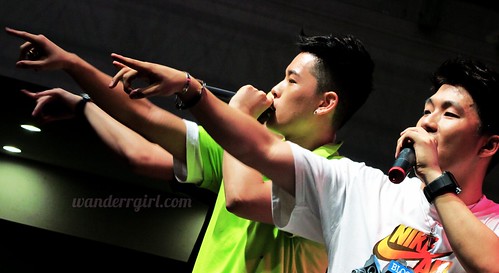 What makes One Way different from other Korean music groups? They TRULY, UNDENIABLY appreciate and love their fans, and they sure know how to SHOW it. The boys really try their best to make everybody feel special, and they do more than just stand and look pretty. And to anyone who follows them on Twitter, you know that they really take time out to communicate with their fans. That, to me, is just amazing.

So it's no wonder Chance, Peter and Youngsky are so well-loved here in the Philippines!

D.J.s are carving out a niche for themselves in Korean music scene DJ Gon plays on a recent weekend at Club Answer in southern Seoul.

People are shaking their hips and twirling their arms in the air. But instead of facing one another, the crowd of people, packed shoulder to shoulder on a recent summer night, only has eyes for one person - the D.J.

“D.J.s are here to play for each and every one of the clubgoers,” D.J. Guru said after finishing his set at Club Answer in Gangnam, southern Seoul, on July 3. “It feels good when people go to the dance floor as they listen to what I play.”

Until recently, D.J.s were considered as little more than human record players. Now they are recognized as artists at the forefront of a thriving underground subculture.

Whereas the D.J.s of the past confronted a public more interested in meeting friends than listening to music, the D.J.s working today are pop music idols with large fan bases and record deals.

she's from the new core contents media hybrid/mixed group where seeya's soomi joined.
she's on the right btw
eta: this is from 6 months ago!

Through tvN Gil’s Newton Chart, a poll based on the best male & female idol groups was held between July 26th and August 1st recently.

With 50% votes coming from a selection committee group, 30% from internet votes and 20% from mobile votes, 20 groups from each male & female category were selected.

Starting off with the male idol group category, here are top 8 ranking groups based on the results from the poll (numbers in bracket denote # of votes):

doubting their methods because of lack of obvious candidates (for example SHINee/BEAST), and how did they pick the "selection committee"?

so this is an incomplete ranking and just public opinion so far.

On a recent episode of MBC’s Hot Brothers on August 1st, Lee Ki Kwang was quizzed by Kim Gu Ra for the name of the girl group member he likes. Ki Kwang actually answered he likes all but after getting pressed by Kim Gu Ra, he answered Victoria from f(x).

Lee Ki Kwang expressed: “I admire Victoria from f(x). It’s not that kind of like, but she is very beautiful and I developed good feelings after seeing her on another program. She gives off a very warm and refreshing feeling.”

Park Myung Soo said, “If you want to meet her, then meet her!”

Lee Ki Kwang responded, “If I could have a meal with her…”

Park Myung Soo then attacked, “But what about Victoria’s height?”

Lee Ki Kwang said in anger, “How would I know!”

definitely don't approve of this, Kiki.

edit: In case people are confused, H Hour is Hwanhee's new mini album, to be released August 5th. I posted news about this new mini album on omona: here and here.

lol As soon as there is Hwanhee news at all, my first priority is to post it on omona :D You guys don't mind Hwanhee news, right~

If you stalk Kpop celeb Twitters or SINA blogs, you might have already heard the news that Super Junior's Heechul is in Beijing. Zhou Mi mentioned on his SINA blog not long ago that Heechul would soon be coming to China to visit him, and it looks like that day has finally arrived! While apologizing to his Chinese Petals for not being able to greet them properly at the airport, Heechul revealed his purpose for travelling: apparently he's going to play a part in a drama there!

( Collapse )
source: CrazyCarrot350
Leeteuk, Kyuhyun, Eunhyuk and Sungmin along with Miss A on MBC's Flower Bouquet

cue jealous hyuk fangirls, lol
Donghae, Taemin (and a little Xander) in the preview for Dream Team in Hong Kong:

someone's on a boat.

Kim Nam-soo has stuck needles into generals, actors, tycoons and at least one president for more than six decades as South Korea's acupuncturist to the stars.

Grateful patients say his treatments combining acupuncture with the ancient practice of burning herbs on the skin do as much good, or more, as Western medicine in treating everything from arthritis to diabetes, burns and even cancer.
( Collapse )

I can't believe this hasn't been posted, I love it and Alex is so freakin' hot!

Idols Park Mikyung, Chaeyeon, and Super Junior’s Yesung and Donghae were all present at the July 31 broadcast of MBC’s ‘World Changing Quiz’ when Kyuhyun of Super Junior described what grabs his attention when out on a blind date with a girl.

The youngest member of Super Junior confessed that when out on a blind date, he feels most enraptured by a girl if she offers to pay for drinks at a restaurant. This act of kindness reflects kindness and compassion in Kyuhyun’s eyes, and makes him feel most attracted to the girl’s charming personality.

However, Kyuhyun is by no means a cheapskate! He explained, “I [do] pay all [of the bill,] including the drink, but my ideal type is someone who is considerate and say ‘I will pay this one.’” By simply offering to help out with the costs, a girl can gain much favor from Kyuhyun, even if she doesn’t end up paying in the end.

Note: Christian Bautista is a Filipino singer who's also popular in Malaysia and Indonesia. Also, there are no subs because almost all parts of the video is in English anyway. The ones in Tagalog are very short, irrelevant parts.

BoA will have her singer comeback in Korea after 5 years on 6th August on KBS Music Bank.

Ahead of that, BoA will be releasing her comeback 6th album on 5th August. And on the 2nd, she will be revealing the title song ‘Hurricane Venus’ at 10am on various music sites like Melon, Bugs, Soribada, Dosirak.

The title song ‘Hurricane Venus’ talks about the image of woman in strong love like that of a hurricane, and it features some impressive chorus, powerful sounds and sexy grooves and beats.

BoA has especially gave the song the title of ‘Hurricane Venus’ personally. Will this signal BoA’s hurricane-like comeback to the Kpop scene?

There has been much interests for this long awaited comeback, but at the same time, many have their eyes on the upcoming showdown between BoA and Se7en’s comeback after 3 years with the title song ‘Better Together.’

Popularity in the rising, idol rookie Teen Top was #1 searched people on online portal sites over the last weekend.

Not even 1 month into their debut, Teen Top would go up to portal site search charts whenever they had live performances on the weekly music shows on weekends, and search keywords like ‘Teen Top’ and ‘Clap’ together with the members’ names are top searched keywords.

This is especially during the times where other top stars like Se7en and SHINee are having their comeback, and Teen Top still managed to garner so much interests from netizens.

Teen Top’s agency T.O.P Media commented, “Not only are they #1 on search, fans sign up on their twitter and fanclubs are also in thousands, proving the great amount of interests the group is receiving.”

Rookie 5-member girlgroup Chocolate signs up with fashion town Nuzzon before their debut.

Even though they have yet to debut, Chocolate has been selected by Nuzzon for the upcoming marketing and promotional activities for the fashion brand.

Chocolate consists of members from Korea, China and the States and is said to be a global girlgroup. Their agency H Line Entertainment revealed that the group is set for debut in mid August.

A staff from Nuzzon revealed, “Chocolate has the bright and cute image, which matches that of Nuzzon. As the new faces of fashion town Nuzzon, the girls will also be performing in the performing theatre in front of the fashion town and fans will be able to see them more upclose and personal. “

To celebrate their second Japanese single, I My Me Mine, 4minute had a live mini-performance outside at the Aqua Garden in Tokyo.

The leader, JiHyun, introduced the new song, which was number 22 on the Oricon Chart on the day it came out, as a song that could make anyone forget about the summer heat by emphasizing rhythm and the members’ singing abilities.

After performing Muzik and Hot Issue, 4minute took time to shake hands with the fans. During the event, HyunAh also passed out due to the extreme heat.

After Tokyo, 4minute plans to perform in Nagoya and Osaka on August 1st, and also at FujiTV’s summer concert, Mezzamassi Live and NHK’s Music Japan on the 2nd.