Kyuhyun Deletes His Twitpic
Kyuhyun was never the camera whore like some of his Super Junior hyungs. The maknae is usually shy to update his Twitter account, his face often only popping out of his members’ Twitpics.

Today though, Kyuhyun’s Twitter showed new picture above of the idol with member Donghae, but apparently even this rare occurrence is a mistake. He writes: “I didn’t upload this photo, why did this go up? How to delete?”

He has figured out how to delete it seems, since the picture is no longer there. Good thing we caught it before it dissolved into cyberspace. The picture above looks like a continuation of his kissy shot posted in Donghae’s Twitter. Why would Kyuhyun delete it though? We don’t see anything wrong with it, do you?

This boy, I just don't get him sometimes lol... although I'm betting Hae dwl-ed it.
Article is a few days old btw. Wonder Girls, the most well known Korean singer group in abroad countries, are to show an exquisite performance to cut the starting line of the opening ceremony at MIPCOM

The MIPCOM opening party is a networking party where around 3,000 MIPCOM buyers and sellers from countries around the world participate. KOCCA is proceeding with advertising Korean culture and excellent Korean programs through the Korean Contents Showcase ceremony.

KOCCA holds Korean contents advertising event under the title ‘What’s Wonder in Korea’ in the opening party on October 4, and optimizes the release of Korean strategic contents towards potential buyers.

In the main hall where Korean singers mainly perform, Wonder Girls, the most internationally well known Korean singer group, are to show an exquisite performance to initiate of the opening ceremony. Wonder Girls is Korea’s representative group consisting of 5 girls, and after ranked on the 76th in America’s Billboard Chart Hot 100 with their debut song ‘Nobody’, their mini album ‘2DT’ introduced this June also ranked 21st place in the Heatseekers Albums, the partial chart of the American Billboard. Wonder Girls are to step on the red carpet at the MIPCOM opening party with fabulous American actors this year.

Awesome, Yubin get's to spend her birthday in France =D

Filipino KPop fans were enraged against GMA Network's variety show Party Pilipinas last September 19, Sunday, after the hosts claim that Korean idol Rain will appear on the show.  The viewers, however, were dismayed to see that instead of an actual Rain (who held a concert in Manila a week prior), singer Mark Bautista appeared on stage while being doused by raining water.  A caption then appeared, "Sabi sa inyo may Rain eh (We told you there's going to be Rain)."

Source:  BubblyMD on YouTube, comments via Pinoy Exchange, written by me

For all you Super Junior fans out there: Monday’s episode of I Am Legend will feature a special appearance by idol star and sometimes actor Kim Heechul.

In the episode (the 15th), the ladies of the drama’s Comeback Madonna Band visit a radio station, as guests on Lee Sook-young’s “Power FM” program. Hwa-ja (played by Hong Ji-min) is the first to spot Heechul, who plays a radio DJ but is essentially playing himself. Hwa-ja asks for his autograph, at which point he recognizes the group and declares himself their fan. He then invites them on his own program, proving that the band is making serious inroads into their career.

The producers stated that they wanted to convey the reality of the band’s rising popularity, and therefore made the request of Heechul, who readily agreed.

Heechul may be most famous as an idol singer and pop-star provocateur, but he has several drama roles over the past few years, which include Loving You a Thousand Times, Golden Bride, and one of my personal favorites, Bad Family. (All were SBS shows, as is I Am Legend.)

This was because Jang Hyunseung and Seo Inyoung had the same birthdays on the 3rd of September.

The information of the same of the birthday was from Shin Bongsun and Jung Gaeun when they dropped by the BEAST dorm for MBC every1 ‘Idol Maid’. They had told Jang Hyunseung that Seo Inyoung, who is filming SBS ‘Heroine’ with them, has her birthday on the same day as well.

Jang Hyunseung who was happy from hearing the news volunteered to send her a video message before anyone asked him to. Even though he was shy, he stated in the video message, “Happy Birthday, since we have the same birthday, let’s spend our birthday together next year,” confessing his thoughts.

Jang Hyunseung, who had been confessing that he liked the actress Lee Minjung, showed off a new shy emotion toward Seo Inyoung as he was recording the message. He had even stated, “I’m gaining confidence like I drank alcohol,” showing that he had been wanting to be close to Seo Inyoung since the past.

The broadcast will be on the 22nd of September at 6PM KST.

LOL Peter was such a cute kid. He pretty much still looks the same :)

The boys are all looking mighty fine here! 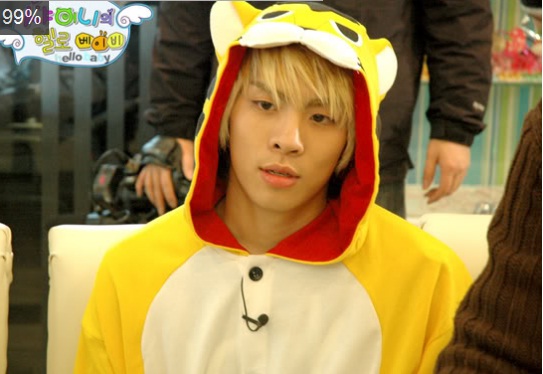 Top Idols Resemble Animals
Some idols resemble each other, some boy idols are pretty like girls, while some girl idols give off a boyish charm. There are some though who resemble…animals?

A recent report by Ystar revealed animal counterparts of your favorite idols, such as Super Junior’s Eunhyuk the anchovy, Sungmin the Chihuahua, Heechul and Wonder Girls’ Sohee the fluffy kitten.

Number two on their list though is Siwon who is said to resemble a horse. Is that because he is strong and strapping?

Sharing the top spot as dinosaur lookalikes are Big Bang’s TOP, Super Junior’s Donghae and SHINee’s Jonghyun. Well they are definitely not scary as the T-Rex.

Tales as old as time, idols cute as cute can be? What do the fans think?

'scuse me while I die laughing a few times over. The dino-pictures they used for Hae, Jjong and TOP are priceless because they're spot on.
And I didn't have the heart to change Jjong's pic to a more flattering one because of the LOL factor. SuJu Leeteuk "received women's clothing sponsors before" size 44 proved
During broadcast, Super Junior Leeteuk directly wore a women's clothing of 'size 44' and he even fit in the clothes perfectly.

In SBS Chuseok Special 'Shocking Variety Star Real Video' which was aired on the 21th September, best stars such as Super Junior, T-ara, SHINee, f(x), Park Hyunbin, Jung Juri and others had revealed their own secret on the show.

He even tried to wear a women's jacket of size 44 in the studio, and the jacket fit him perfectly. Jung Juri who saw this commented, "my size is 66", showing a shameful expression.

Leeteuk added, "in fact, after seeing the clothes I wore, it is said that miss Song Yuna also like them and ordered the same clothes", creating topic.

Besides that, ZE:A Kwanghee revealed, "I was dumped by my girlfriend because of my voice", causing laughter in the studio.

Shin-i? I've never heard of that one before... and Teuk makes one of the best girls in k-entertainment, seriously.
AND JUNG JURI, DO NOT BE ASHAMED OF YOUR SIZE. U'R PERFECT GURL.

- What will you do this coming Chuseok?

Soyeon: All Chuseok holidays I like to take a break and spend it with my holiday. I'll be monitoring the special programs and of course, enjoy the holidays with delicious food.

- What wish you make under the full moon?

Soyeon: For T-ara's comeback album to do good and a good response for my acting debut (Mama, Don't Cry). I also wish family, friends and T-ara members stay healthy.

in which onew is an odd little umchinah, key is frank, and both of their *~unique charms~* shine though. (edited to add the rest of key's interview)

Love is patient, love is kind*, the song "Love is Always," do you know it?
It's also a reference to the 'o-new' of summer**. Haha. I've heard that my name was created as reflection of my personality. I don't really know, but the people around me say that. That my name matches me well.

You've been defined as 'flubber,' a person who doesn’t know where he'll bounce, and people around you also say that unlike the calmness of nature you're 4 dimensional and silly?
I'm not silly. Since I debuted at a young age people around me have watched over my growth. Perhaps that is why they say that? I'm not that special.

It seems that you may be referring to something else when you say that you're not special?
I think I'm just ordinary. I really changed a lot after debuting. My personality was originally quiet, but in comparison to my age I've gone around meeting and getting to know many people, so I've become outgoing to match the atmosphere.

Do you have a thirst as an idol singer in regards to freedom?
I have plenty of freedom now. The things I can express I'm expressing as a MC, singer, musical actor. I'm not in confinement somewhere.
( Collapse )

sauces: live laugh love @ soompi, plus translations for key's interview by our own

episkia (thank you so much ♥)

The list of nominees for the anual BJMAs (Billboard JAPAN Music Awards), which will take place at Tokyo Midtown Hall, Billboard Live TOKYO on February 6th 2011 have been released.

The selections for the categories of pop, jazz and indies for the year 2010 are listed below:

Source: jame-world
I'm so happy for them. And full list can be found at the original article.

Girl group T-ara came together for a very special interview. T-ara has undergone great changes recently and now gets a holiday. Although they're currently on holiday, they kindly accepted this interview.

Earlier this year, T-ara's "Bo Peep Bo Peep" and "I Go Crazy Because of You" became recognized by every one. After that, Eunjung, Jiyeon, Qri, Hyomin and Boram all underwent acting jobs with Soyeon preparing for hers, making all six of them actresses. This created even greater awareness for T-ara.

After this year's Chuseok season though, T-ara will go back to the music roots with a big change.

oops i forgot to put it in a cut