Big Tone, who collaborated with Taeyang in his song, Connection, posted on his Twitter that he was recording at YG~ 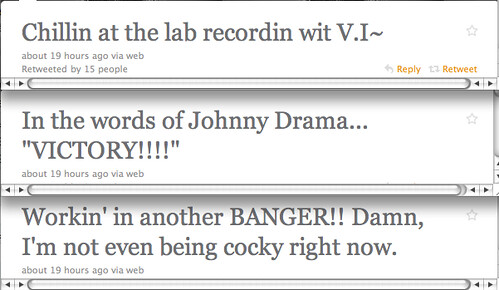 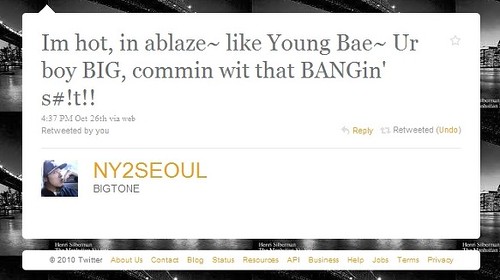 Connection is my jam so I'm happy... but they need to stop recording and wrap this ish up already.

++ Getting ready to perform their special stage together on SBS Inkigayo tonight!
++ From left to right..SHINee’s Taemin, BEAST’s Kikwang, Minzy, 2PM’s Chansung & Wooyoung

"We've been more serious than anyone else."

In Jeju island, actors Song Chang Ui (SCU) and Lee Sang Woo (LSW) who play as homosexual characters, Taesub and Kyungsoo who were humiliated by scene that was edited out and talked about how they needed to look serious and nowhere playful. Every scene, they needed to act very seriously about a topic that was quite hard to address in a weekend drama. They both agreed that it was possible because it was written by Kim Suhyun. On Oct 25th, they've filmed their last hug scene and we've asked them some 'sensitive' OX questions.

► Have you ever felt more than friends for each other?
These actors' answers were definitely not ordinary. We expected answer along the lines of "Acting is just acting" but LSW didn't beat around the bush and answered straightforward and said "Yes I've felt more before." He also said "I always get into the character, and I don't think I have the ability to tell the difference between acting and reality" and laughed.
SCU also chose O and said "Sometimes I felt that way, but whenever I'm not on the set, then I become myself again."

YES!!! but ¬¬ somebody else will have to post it next week =/

She finally won! Apparently Kwon gave her the infamous brand-name bag last week, and lol at Seulong giving her the AM puppy. XD

Encore update (not broadcast): Apparently Oneday stayed onstage (singing and dancing along). Kwon yet again put his foot in it and got kicked by his lovely wife. At her first solo fanmeeting Ga In promised her fans that she would buy everyone a meal if she got #1. Well today, after her Inkigayo win, Ga In bought them all samgyeopsal (pork dish). According to a fan account she cried again saying, "Ah! Jokwon didn't cry! It's annoying!" Apparently Kwon was singing and dancing during her encore performance and Chansung/Seulong/Jinwoon/Taec were doing the lifting part of the choreography. Below are some fan photos of the fanmeeting, Gain is seen enjoying her celebratory meal and wearing an "All My Love" sticker.

Will add their Soom performance and talk cut if I find an upload that hasn't been taken down already.
EDITTED to replace with Dailymotion vid since Youtube took it down already.

We're sure many of you are saying "enough!" with the news about SHINee's Jonghyun and his relationship. The spotlight has been on Jonghyun for the past week, with news of his actions after Music Bank, admission of his relationship and lastly, the negativity of some fans.

Although it seemed as if fans were shunning Jonghyun because of his relationship, it's been discovered that they have been sending him hundreds and hundreds of supportive messages.

Korean Shawols have been flooding SHINee's fanboard with messages to Jonghyun, supporting him and letting him know that they still love him. One message in particular has caught Shawols eye. There is more than 63 pages of the phrase "김종현사랑해" which translates to "Kim Jonghyun, I love you!".

On the 30th MBC “Music Core”, SNSD appeared in white dresses and with their first song “Best Friend”.

During the song’s ending, Taeyeon and Sooyoung cover their mouth with their hand and had a kiss performance, making the audience shocked.

The viewers who saw this said their opinions. “Performance was good, it was a bit uncomfortable to see girl groups kiss.” “I don’t know if they really kissed but it was good to see their close relations”.

At one part SNSD made their comeback with their recent single “Hoot” and through ‘Gee’, occupied 1st in the Japanese charts, as they are active contributors in Korea and Japan

Sharp-eyed fans at Baidu noticed a very interesting picture in the handmade notebook YongHwa gave to SeoHyun in WGm latest  Episode 30. This scene appeared for just a split second, but it was enough to show that SeoHyun did indeed attend CNBLUE's first concert on July 31st.

There was a news report that mentioned her being there; but with the recent 'mildang' episodes, confusing time jumps on WGM and lack of fan accounts there was some doubt to how true this was.

Source: SweetPotatoDays and DKpop
lol I think we can thank Jungshin Chingo for that pic...

Also their comeback seems to have been moved from the 11th of November to the 18th.

I don't care it's few days old since I miss BoA's news here in this silence period :(

Korean ballad group 2AM will officially launch their singing career in eight Asian countries next month, joining a line of K-pop artists who have branched out into the international music markets.

The news came yesterday during the group's showcase introducing their first full-length album "Saint o'clock" to local and foreign media at the AX-Korea hall in Seoul, when member Seulong spoke about the group's upcoming activities overseas.

"Our first album will go on sale in China, Hong Kong, Singapore, the Philippines, Malaysia, Indonesia, Taiwan and Thailand," Seulong said. "We haven’t gone on many promotional tours in Asia so we were happy to hear that it will be released in those countries."

Accusations that the Korean Wave is waning seemed on shaky ground in Tokyo on Friday, when a fleet of Korean pop stars hit the stage.

More than 5,000 fans gathered at Tokyo International Forum hall in Chiyoda ward, the heart of Tokyo, for the “K-pop Night in Japan” concert.

The show, organized by Korea Creative Content Agency in collaboration with the Ministry of Culture, Sports and Tourism, included a star-studded line of performances, including girl bands 4Minute, Sistar and a boy groups T-Max, ZE:A and Teen Top.

Srsly depressing. D: Also, Hyuk still has yet to put the Hyuk in Hyuksu, but he hasn't updated twitter since the 26th. BTW Jiji is a few months old now; those first pics were from June/July.

It had been announced that 4Minute had an appearance from a Japanese TV Show entitled: NTV PON this week. Unfortunately, because a lot of us, international fans, weren't able to watch the real situation from the show, we weren't able to see how the girls seemed to be humiliated and ignored on the said show.

In order to make a name on the Japanese market and promote their 3rd Japanese single: "FIRST/DREAMS COME TRUE," they appeared as guest performers at NTV PON. However, the rude treatment of the hosts of the show towards the girls were reported and was widely talked about on different internet sites.

It was reported that the girls only had more or less, 10 minutes of airtime during the whole show. Besides that, the girls can only be found at the background of the show and the hosts were merely ignoring them. It appeared like the purpose of actually promoting their single has not been shown. The cooking show scene proceeded with very less emphasis on the girls who were simply looking at the side of the hosts.


With this, Korean Netizens immediately showed their disappointment and reactions towards the humiliation that the show displayed towards the girls and expressed comfort for the girls. Some of them said:

"Just come back here in Korea and we'll give you more love here."

"Is this the proper treatment that idols with more than 2000 fans should receive?"

"They cut off the music in the middle of the dance to cook."

"Do they even have any common sense on what they have done?"

Reading through this may hurt a lot of us - 4Nias, knowing that despite of the girls' continuous hard work, they are not receiving the respect, attention and proper treatment that they deserve. Perhaps, what we could do now is to continue supporting them and hoping that their agency as well as the other labels that manages them could make a more "well-thought-out" plan for their overseas promotional activities. Well, if you are a famous actress or entertainer, it seems that you could have your pick among some very interesting candidates.

MBC piloted a new variety show called “Actress’ Butler” during Chseok. Due to the positive response during the Chuseok airing, the network has decided to make it a regular program. On the show, the male guests act as “butlers” to serve the female guests’-all of whom are celebrities- every whim and beckoning.

The cast members will include drama actress Jo Yeo Jung and actor Ha Seok Jin who appeared on the piloted Chuseon special. Other stars to appear on the show include – smooth singer Se7en, Gumiho-hunter Noh Min-woo from “My Girlfriend is a Gumiho”, comedians Park Hwi Soon and Noh Hong Chul and FT Island’s Lee Hong Ki.

The actresses who receive the services of the celebrity butlers includes Hyun Young who was also on the Chuseok special, sexy singer Son Dambi, announcer Choi Eun Kyung, as well as actress Min Hyo Rin and Lee Chung Ah

The show’s main MC will be the recently married Ryu Si Won.

Filming first took place on the 19th and 20th of October around the Kangnam area of Seoul. During this first filming, Se7en was chosen simultaneously by Hyun Young and Min Hyo Rin and had to serve both of them as their butler. The production team said “Se7en is known to be a gentleman and was chosen by two girls at the same time.” Oh really?

Noh Min Woo posted the pictures above to his Twitter account during the filming two weeks ago and our butlers sure look the part and to be in a good mood…I wonder how long that’ll last! Hopefully the ladies aren’t divas and run the butlers ragged. God knows just how hard all these entertainers are already working!

So with all those pretty boys (ohmygosh Noh Min-woo- SO HOT!) and funny men, who would you choose?!

The program will debut on the November 4th.

It seems like T-ara has been absent from the music scene for quite awhile now, but leave it to quirky Hyomin to keep fans updated on their everyday lives!

Recently, Hyomin tweeted, “It’s been a long time since I went book shopping with Boram-unni. I’m really really excited hehe ~ To make myself feel like I’m going out, I attempted to dress myself up as a winter eskimo woman but.. I ended up looking like a bear.”

Along with the tweet, she posted up pictures of her fashionable self. The pictures look like they came straight out of a photoshoot, don’t they? I guess when it comes to modeling, Hyomin’s a natural talent!

This group is formed by Vibe’s Yoon Min Soo, and are dubbed the 'female 4MEN' under the same management as 4MEN.