Park Jin Young was on Yoo Hee Yeol's Sketchbook recently and had a little collaboration with Fei and Jia.


singing a nice christmas song together.

ngl i consider this a warm up for the awesomes that i'll be the jyp nation team play concert!
tudou & youtube

Soyeon and Hyomin of T-ara participated in an ‘XO Quiz’ game with reporters from Sports Chosun. The girls were asked a series of questions, to which they either replied ‘O’, meaning yes, or ‘X’, meaning no. 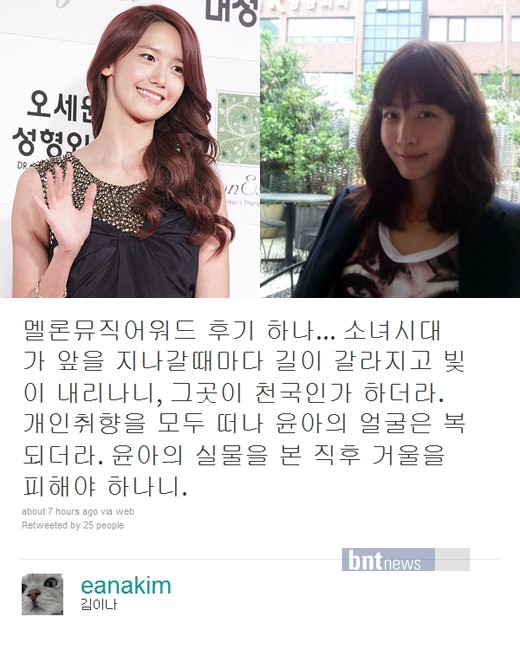 Composer Kim Eana wrote a personal fan account of her experience at the “2010 Melon Music Awards” on her Twitter.

The composer won the ‘Song Writer Award’ at the ceremony held on December 15th, and she’s the writer behind popular tracks such as Kim Gun Mo’s “Cry,” Ga-In’s “Irreversible,” and IU’s “Good Day” and “Nagging.”

On the 17th, she wrote, “Here’s one account of the ‘Melon Music Awards’… Every time SNSD passed by in front of me, the pathway seemed to part and light was shed from the sky. Some called it Heaven. Setting my personal preferences aside, Yoona’s face was like good fortune, forcing me to avoid mirrors after I saw her face in real life.”

On We got Married aired on 18th, as part of the mission Yonghwa recommended going over to CNBlue’s dorm.

Before going, Yonghwa phoned Jonghyun to ask what he was doing. Jonghyun didn’t know Yonghwa had his phone on speaker phone, and he answered, “Just in underwear on the bed relaxing” which freaked Seohyun out.

Yonghwa added, “It’s on speakerphone so Seohyun can hear you and she’s freaking out.”

At this Jonghyun panicked and repeated “She can hear? She can hear?”. However, Jonghyun seemed to be enjoying freaking Seohyun out and added “Minhyuk is also in his underwear.”

At this Seohyun seemed to be shocked and said “I’m not going to your dorm” which caused laughter.

161210
画的真好，不是可爱，但是有够帅哈哈~把我画帅了！
Really well-drawn, it's not cute, but it's handsome enough haha~ (You) drew me handsomely!
( Collapse )

171210
Source: @Heedictator
Shared by IINA @ sj-world.net
English translation by eternalsnow @ sj-world.net
Please take out with full and proper credits.
& (second-last 2 tweets)
From Korean to Chinese: 啃呀小苹果
From Chinese to English: ★//囧酥餅 @ SJ-WORLD.NET.
& (last tweet)
Source: Heechul Twitter
Translated by Minnie @ SUJUISM.BLOGSPOT.COM
TAKE OUT WITH THE FULL CREDITS
DO NOT ADD YOUR NAME TO THE CREDITS

While making an appearance on KBS 2TV’s “Yoo Hee Yeol’s Sketchbook“, singer and producer Park Jin Young revealed the reason behind adding his ‘JYP‘ intro for the songs he produces.

On the December 17th episode, MC Yoo Hee Yeol asked him, “Why do you always put in ‘JYP’ in the beginning of all of your songs?”

Park Jin Young answered, “The public gives a lot more attention when I add in ‘JYP’ for a rookie singer’s songs. I don’t add it around their 3rd or 4th album. Putting the JYP brand up front makes the rookie shine a little bit more.”

When further asked about his most favorite song out of all the songs he produced this year, Park Jin Young replied, “It’s ‘Bad Girl Good Girl.’ I like it so much, I want to perform it at my year-end, but after I change the title to ‘Bad Boy Good Boy.”

He continued, “I first came up with the idea for the song when I was reminded of my old friend, who was a dance major at an arts high school. Although she was rebellious on the outside, she was innocent and caring on the inside.”

Actor Jackie Chan’s son, Jaycee Chan, sent a flower basket to the Wonder Girls in support of the girls’ first concert held in the Asia World Expo in Hong Kong on December 17th.

On December 18th, member Hyelim uploaded a picture of the flowers along with the tweet, “To Wonder Girls, From Jaycee Chan.” The flowers held a message stating, “We hope that you enjoy our Hong Kong.”

Netizens commented, “Wow~ The popularity of the Wonder Girls!,” “A picture of them together would’ve been nice~,” and “Wonder Girls fighting!”

Before the "who?"comments.... just in case you didnt bother to read, JAYCEE CHAN IS JACKIE CHAN'S SON

Source: Cheri Shi's Flickr (Check it out for more and bigger pics)

is he trying to speak yoogeun language at :14 what is going on there

EDITED : wild2days version
im pretty sure hardcore khuntoria fans would of found these vids already
but posting to keep up the regularity of wgm posts :) enjoy
A Chinese fishing boat capsized in a maritime scuffle with a South Korean coast guard ship trying to curb its illegal fishing activities Saturday, killing one fisherman and leaving two others missing, South Korea's coast guard said.

About 50 Chinese fishing boats were illegally fishing in western South Korean waters off Gunsan city, about 170 miles (270 kilometers) south of Seoul, when the South Korean ship approached them, coast guard spokesman Ji Kwan-tae said. One of the boats intentionally hit the larger coast guard ship to allow fellow Chinese vessels to sail back to their waters, and then capsized, he said.

Eight people from the capsized boat were plucked from the sea, but one was unconscious and later died at a Gunsan hospital, the coast guard said in a statement. Coast guard boats and helicopters were dispatched to the area to locate the two missing Chinese sailors, it said.

Coast guard officers fought with fishermen on other Chinese boats who wielded steel pipes, shovels and clubs, and four of the officers suffered fractured arms and other injuries, the statement said. None of the injuries were life-threatening, Ji said.

Chinese fishing fleets have been going farther afield to feed growing domestic demand. A collision between a Chinese fishing boat and Japanese coast guard vessels in September led to a nasty diplomatic spat between the two countries over disputed islands in the East China Sea. The incident soured what had been improving relations between China and Japan.

A man answering the phone at the China Maritime Search and Rescue Center in Beijing confirmed that a Chinese fishing boat capsized Saturday in the Yellow Sea and two Chinese fishermen were missing. But another man at the center — reached by phone an hour later — said nine fishermen had been rescued and only one was missing. South Korea's coast guard couldn't immediately explain the discrepancy in the number of missing fishermen.

Both men — who didn't give their names, as is common with Chinese officials — said China dispatched a rescue boat to the area.

Calls to the Chinese Embassy in Seoul went unanswered. In a time when Korea is making headlines due to tensions with its northern partner and most Westerners ask natives timidly “From the North or South?” one Korean-American pioneer seeks to finally find success in the long-embattled fight to get the word out and distinguish South Korea — via “hansik,” or Korean food.

Stone Henge quickly put her to work with a new photoshoot, for which she transformed into a prima donna for the company’s “Beautiful Moment” concept. The concept, further explained, is simply a representation of life’s most beautiful moments.

Although busy with her filming obligations, the photoshoot lasted from early in the morning to late in the night. With the weather being terribly cold in the area, she revealed her strong determination to show off an excellent work ethic.

Yenny: (dancing)
Seulong : How do you turn to the side?
Yenny & Seulong: (dancing)
Seulong: Let’s dance together. It’s gonna be ok.
Camera: I guess that trainee didn’t understand.
Yenny: He needs to try REALLY harder.

Haha @ Jia's "YO-HO!" and Junho's face lol. I need to be adopted into this family.

Last year, the ladies of SNSD / Girls’ Generation kicked off their 1st Asia Concert Tour titled “Into The New World” in Seoul. The girls have visited various countries in Asia over the past year on their tour and recently SM Entertainment revealed that SNSD would release their first live album titled The 1st Asia Tour “Into The New World” on December 23rd. 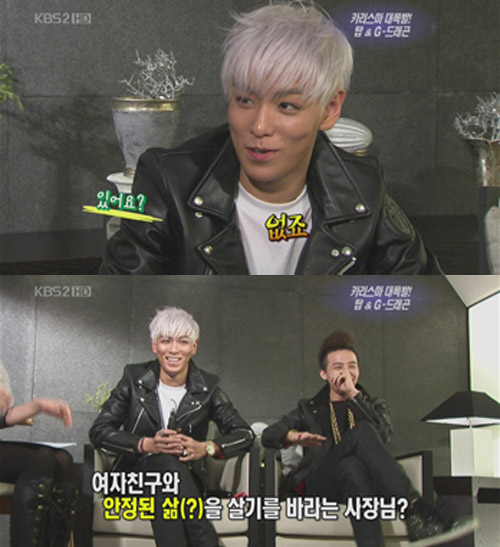 While on the topic of their upcoming new album, the boys expressed, “This is a project album that we wanted to release first for the fans who are tired of waiting for Big Bang’s album. It would be good if they thought of it as a Christmas present.”

When asked about the positives about promoting as a unit group, G-Dragon explained, “We can drink alcohol comfortably. Before, we were uncomfortable about drinking around the other members, because apart from T.O.P and I, the other members don’t drink.”

The duo also affirmatively said “No” when the reporter asked if they had any girlfriends. Slyly, the reported persisted, “Are you sure that’s not an answer with your boss in mind?”. Yet both T.O.P and G-Dragon answered, “Our boss would actually rather see us living a stable life with a stable girlfriend.”

LOL one of these two totally has a girlfriend GD

Despite much controversy surrounding their comeback, TVXQ is once again impressing those around them – as number one on the pre-orders chart, the boys are showing that they are virtually unstoppable!

Though the boys are not scheduled to come back until January 26, pre-orders are pouring in at every major CD shop in South Korea, making them first on charts. After being away from the music world for several months, it’s really quite remarkable to see how well TVXQ is doing already – not to mention reflective of how influential they truly are.

In addition, JYJ is faring quite well also, as pre-orders for their new single is ranked number one on several large online shopping sites such as Amazon Japan, Tower Records, and CD carrier HMV Online.

Despite the fact that many fans are still upset over the fact that the five boys are working separately instead of as one group, it seems that they are all faring quite well under the given conditions.

Right, so I wasn't paying attention and instead of copying+pasting my tinypic link, I pasted/hotlinked the KPL one for the picture. *side-eyes herself*

Seulong forced to apologize for hugging IU on Music Bank


Seulong and IU’s Hug Was A Parody?

SHINee’s Onew expressed his thankful feelings towards T-ara’s Boram on an episode of KBS 2TV’s “Nocturnal.”

The episode focused the members of the “Nocturnal” team helping to draw a mural on a dirty wall of an elementary school, and T-ara and IU made surprise visits as guests and joined the team to help out.

The MCs were more than happy with the extra help and provided them with snacks such as ddukboki (hot rice cakes) and fish cakes.

During the meal, Shin Dong Yeob and Yoon Jong Shin suggested Onew feed the snacks to the female celebrity (that was present) he has the most interest in. Without hesitation, Onew declared that he “had a person he’s always wanted to give to,” surprising the MCs.

The target of his affections turned out to be Boram, leading to a ‘rose colored’ atmosphere as Boram shyed away while the T-ara members revealed, “Boram has always been a hardcore fan of Onew.”

Onew answered, “I already knew that she was my fan through reading articles. I’ve always wanted to thank her for saying that she likes me.”