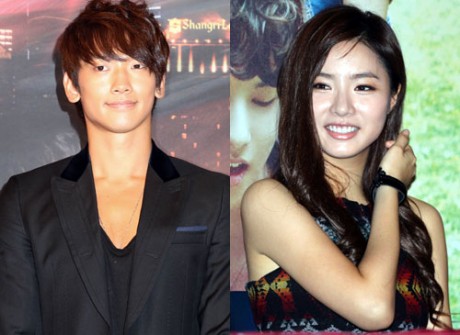 Earlier, we reported that singer/actor Rain signed on to play the male lead role for the upcoming blockbuster movie, “Living in Heaven“. Actress Shin Se Kyung was also billed as his co-star, but back then, reports could only guess on her confirmation.

The media is now reporting that the actress has indeed signed on for the project, and she’ll be playing Rain’s love interest. The two have finalized their contracts, and filming will soon begin in earnest.

Directed by Kim Dong Won and produced by CJ Entertainment, ’Living in Heaven’ is a remake of ‘The Red Scarf‘ (1964). For this melodramatic film, Rain will tackle the role of ‘Taewoon‘, a fighter pilot, and Shin Se Kyung will play as ‘Seyoung‘, a mechanic.

:O she has no tag? Not even dream crusher or homewrecker or that one hot chick?

World renowned musical giant Frank Wildhorn says, “I want to make him the lead role of ‘Jekyl and Hyde’.”

JYJ’s Kim Junsu shed emotional tears when a global giant praised him on his performance for ‘Tears of Heaven’.

According to Core Contents Media and Seol Company, world renowned musical giant Frank Wildhorn, who is most famous for the musical ‘Jekyl and Hyde’, watched the first performance of ‘Tears of HEaven’ on the 1st and stated, “Kim Junsu showcased great acting skills. If I ever get the opportunity, I’d like to offer him the lead role in ‘Jekyl and Hyde’ on Broadway.“

Hearing such praise from Frank Wildhorn, Kim Junsu shed tears as he said, “I wanted to show everyone a great performance,” and showed his gratitude by embracing the musical giant.

The first performance ended in success with all 1,500 seats selling out.

Fans of various idol groups went wild as their favorite artists paired up with different teammates in order to deliver performances that were hot, hilarious, astounding, and memorable.

Check out the videos below!

Heejun and Onew performing "Candy" is the most adorable thing EVER.

Apparently at the beginning, it's said in Vietnamese "Nhac han, loi viet" which means "Korean song, viet lyrics."
Not sure if I should tag this one with plagiarism.

They're all competing by performing k-pop songs from the 70s and 80s.

I want an official duet from these two, they harmonize well. :o OTP? What OTP? 8D

Following news of their return back to Japan as five members on February 3rd, Tokyo TV’s live broadcast of ‘7 Star Bratch’ revealed behind-the-scenes footage of the KARA members happily filming for their show, “URAKARA.”

The program stated, “The KARA members arrived happily together as five at the Tokyo Haneda Airport yesterday (February 3rd),” and showed footage of the members walking out of the airport while being surrounded by the warm support of their fans. The whole studio panel applauded upon watching the footage and warmly welcomed the members with, “Welcome back.”

The show’s reporter added, “They have started the filming of “URAKARA” today. The members looked tired and sleepy, but they still continued on with the same bright and friendly image.”

Basically the same story he told in the Sebakwi book.

This Lunar New Year, many viewers were disappointed because all the Lunar New Year specials seemed to be taken over by Idols. There was "Idol Health and Beauty Contest," "Idol Brain Battle," "Idol Olympics," "Idol Star 7080 Singer King," "King of Idols," "Star Dance Battle" and "Star Couple Battle."

Not only so, but shows such as "Idol Health and Beauty Contest" and "Idol Olympics - Swimming Contest" were criticized because it focused on their bodies. On most of the programs, many idols that were all mostly in their early 20s wore revealing clothes and did suggestive dances, making viewers turn the channel in shock.

Idk but I personally really enjoyed "King of Idols" - reminded me a lot of the older 2006-to-2007ish K-variety shows like X-Man.

Well, I’m going to guess it won’t quite reach Pig-Rabbit levels of fandom (or the Sam-soon doll), but there HAS been a bit of interest in the stuffed doll carried around by Pil-sook (IU) in the popular teen drama Dream High.

There’s no better time than Chuseok and Lunar New Year’s for idol groups to get out there and promote themselves to the public. A variety of special programs lets them to reach out to a bigger audience, since everyone’s home from work and school.

So which stars hit it big during 2011’s Lunar New Year holiday? They’re none other than T-ara, Secret, SISTAR, and rookies Han Groo and Dal Shabet. The girls dominated the Lunar New Year’s specials by appearing on almost every single show.

According to Sports Today, T-ara grabbed 1st place with a total of 11 appearances on the three major broadcasting networks - SBS, MBC, and KBS.

Luna of girl group f(x) appeared on MBC's Sunday, Sunday Night. During her "Enjoy Today" audition, the recording had to be paused because of her tears. Due to the harsh critiques from the judges, the singer was unable to stop crying.

"Enjoy Today" had been recording for an episode involving the theme, "Enjoy Rock." The participants who participated in this project had to battle against one another by performing. The songs had to be newly released songs by rock legends Kim Jongseo and Yoon Dohyun, who also appeared as judges. Other judges included famous singers like Yoon Hyunsang and In Sooni.

According to the judges, "she lacks the feeling of understanding music." After hearing this, Luna cried so much that recording had to be put on hold.

What do you think of their comments and Luna's reaction?

Through the preview, it was revealed that TVXQ’s Yunho and Changmin will appear on the February 8th episode.

It’s looking like viewers will get a great dose of TVXQ’s charms through their dance and stories. Yunho will even pull off a surprising tongue trick!

Check out the clip below!

Super Junior’s Kim Heechul has been leading a busy career ever since his debut in 2005. Super Junior is on their third Asian tour, and he’s a fixed cast member of MBC’s “Radio Star“, MBC’s “Night of Shining Memories“, and SBS’s “Young Street.”

His four dimensional personality and self-named ‘Big Space Star’ image is obviously working with the public, but that doesn’t mean his career was based on spur-of-the-moment decisions.

In an interview with Star News, Heechul explained that the latter half of 2010 gave him a chance to reflect on his future.

He stated, “At the time, I wondered whether I should focus on my individual activities outside of Super Junior, or accelerate into the variety genre. I had a chance last year to visit L.A. during an SM Town concert, and I was able to walk around freely while thinking about these concerns. In the end, I became determined to not worry about anything and to just focus on becoming a better MC.

When asked about his candid manner of speech, he replied, “I try to show a more honest and free sense of myself during broadcasts, but I do realize that this means I must be even more respectful and upright outside of my broadcast activities.”

He continued, “If a character like me didn’t have respect as a foundation, it’s easy for me to be hated. Think about it. If I were to commit something that would raise public concern, wouldn’t I look really cocky? But of course, please note that my courteousness comes from my genuineness as well (laughter).”

f(x)’s Victoria is famous for her flexibility and with this latest win, she’s lived up to her reputation as the ‘human folder’.

On KBS’s Lunar New Year’s special, “Idol Brain Collision“, Victoria and the other female contestants were asked to see how far they could stretch. Victoria was able to stretch out to an astounding 217 cm – that’s just over 7 feet!

Needless to say, she blew the other competitors out of the water. In the picture above, you can see the aghast faces of the other female idols!