they're so adorable even when they don't talk ;___;
Having originally aired on February 26th, a clip from school variety show ‘100 Points Out of 100‘ is heating up the internet. The clip shows all the cast members from the show dancing to SHINee’s ‘Ring Ding Dong‘.

Onew first teaches B2ST’s Yoseob, officially known as the program’s ‘dance copy machine’, the popular dance and the two hit it off. miss A’s Min then jumps out to the stage, showing off her own powerful version of the dance to everyone’s delight.

The atmosphere gets hot, and the entire cast decides to jump in, with Tony Ahn dancing to his oily version, while Shin Young shows off her ‘ahjumma’ style. The clip ends with everyone dancing to ‘Ring Ding Dong’, Bollywood style.

... someone please give me a correct translation of Onew's me2day entry? I saw about 3-4 variations and they're all even more confusing than this one. o_o

baeby_bloo_skys: 2세 means 2nd generation, and usually refers to one's children, which would translate that part to: "They've told me that they're having a child~"

which is still confusing since idk who he's talking about lol
... WAS HE DRUNK? The words of Kim Dongwan, a member of the 6-member pioneer idol group Shinhwa, have raised interest again.

Having made their debut in 1998, Shinhwa will celebrate their 13th anniversary this year. At the moment half of the group – Lee Minwoo, Junjin and Andy – are currently serving their military duties. However, the name ‘Shinhwa' still comes up among music fans, and often gets mentioned by their idol group juniors.

Although Shinhwa as a group has experienced difficult problems and incidents that other idol stars would not even experience once in their lives, they have a passion towards music and the stage that makes people forget about these incidents. Despite the good looks of all 6 members, they still come across as being approachable. Despite the scandals and gossip, Shinhwa remains to be an idol group that cheers up the fans.

If one were to say that H.O.T had a strong elite image, then Shinhwa has a style that's closer to being "warmhearted bad boys".

In the past 10 or so years, Shinhwa, together with their management companies and their managers, have experienced many things. Sometimes they fight, at other times they drink together happily. Now in their early 30s, the members always express their gratitude to the people around them.

Many international fans have been confused about what happened to Good Entertainment and now we finally know!

And of course, Shinhwa is flawless, amazing, going to have the most epic comeback ever, etc.

Big Bang’s Seungri revealed a story about the time when T.O.P hid in a shower stall to avoid attending the group’s activities. The star guested on SBS’s “Strong Heart“, and told his story after he listened to Shinhwa’s Kim Dong Wan share about Eric locking their manager out because he refused to attend his next schedule.

Seungri revealed, “T.O.P did that once too. One day, our manager tried to wake up T.O.P by banging on his door, but he was ignored; our manager couldn’t find him anywhere. We later found out that he was hiding underneath the shower head in the bathroom. He called us and said that he was at home, inside the bathroom.”

Big Bang’s charismatic leader, G-Dragon, revealed a story about how he once flashed his chest in public. GD appeared with Seungri for the March 1st episode of SBS’s “Strong Heart“, and the maknae told a shocking story about how GD’s chest was once exposed. Seungri explained, “GD is very popular with the girls at clubs. One summer night, he went to the club wearing a sleeveless shirt. He was sweating a bit because he was dancing, and he was sitting directly under the lights“.

GD then caught the baton from Seungri and continued, “People are like that sometimes. Time to time, they want people to recognize who they are. I wanted to see people talk about me so I deliberately sat on a sofa in a place that could be easily seen“.

However, things didn’t go exactly as planned, as GD’s sleeveless shirt caused a big problem for him. His shirt got shifted by the sweat and it exposed his chest. GD explained, “The shirt kept moving inch by inch. My whole chest was exposed,” cracking up the audience with his embarrassing story.


now i want that chest EXPOSED!!!!

First post here and I'm kind of terrified but really, who can deny the love that is Changkyu?

On March 3rd, T-ara’s Hyomin, Jiyeon, and Super Junior’s Leeteuk attended the 45th Taxpayer’s Day event at the Namdaemun Tax Office. The idols were appointed to play the roles of ‘head of civil petitions’ in commemoration of the event.

After receiving their appointment certificates, the three participated in a brief photo session. Hyomin stated, “This is a great honor. There were many who received great awards today, and I’d like to congratulate all of them. We, T-ara, will work hard to enhance our national prestige.”

Jiyeon added, “It’s a great honor for T-ara to be appointed such a position. We will make sure to work joyfully.”

The T-ara members and Leeteuk later moved to the second floor office and worked for a day as the heads of civil petitions.

A 3-day opening event for Adidas' first ever launched Women Store in Seoul was attended by the girls of 4minute. The girls caught the attention of everyone by their sweet charms when they started posing several times to the cameras.
( Collapse )

The boys of Big Bang have dominated the charts in Korea, posting an all-kill on the online charts and raking in 7 billion won in sales (approximately $6.2 million USD) in just seven days since their mini-album release. Now, the boys are doing big things abroad as they’ve appeared on the Billboard charts!
( Collapse )

I wonder if Big Bang fans should still be considered elitists >D
Billboard might not be relevant to you, but its one of the only charts i care about :P

Recently, 2PM’s Junsu uploaded an authentication shot onto his twitter. In the photo, Junsu appeared differently from his usual look, capturing the attention of fans.

First of all, Junsu’s usually long fringes had been changed to show his forehead. Also he wore black horn-rimmed glasses, which made him look like Taecyeon. Because of the picture, the two were deemed to look like twins.

Fans have commented, ‘Why are you so cute?’, ‘So cute! Looks so much like Taecyeon’, ‘Looks good! Live well’, and ‘Chestnut hair is very cute’.

What do you think? Does Junsu look like Taecyeon in this shot?

At this charity tournament, “FC Men” team had a friendly match with the Sahmyook soccer team, composed of university students. This charity even that people gathered for fundraised money for “Helping People with Life Difficulties”. 10,000,000（about $8,900) was presented and there were other ceremonies and events that also took place.

The captain of this soccer team, Junsu, was very pleased to have held this soccer game for the purpose of raising money for the less fortunate. “I want the strength and solidarity that was felt from the young players during this event to be of some strength to our society,” he stated.

The celebrity soccer team “FC Men” includes JYJ’s Junsu, SS501’s Kim Hyunjoong and others, and it is a team that was founded in 2010. Other players of this team are JYJ’s Jaejoong and Yoochun, actor Kim Bum, actor Song Jyoonki, and other celebrities that enjoy soccer. 2PM has been picked up by Coca Cola to be their exclusive models for the second year in a row.

Coca Cola first signed 2PM in 2009 for their “Open Happiness” campaign, and were charmed by the group’s diverse talents.

2PM’s latest advertisement for the brand will see the boys turning a bland city into a fun and exciting ‘Coca Cola world’ with their ‘happy energy.’ Combining impressive graphics with 2PM’s infectious energy, the CF will be completed with 2PM’s own version of the “Open Happiness” song.
Source: akp, JoongAng via Nateyay! for them i guess 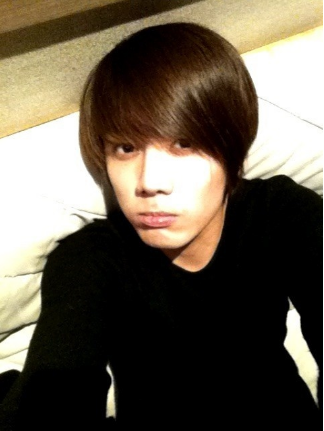 On March 3rd, he tweeted, “I want to see…I want to see ‘TripleS’!! Soon I’ll see! How exciting! ‘TripleS’ great!“, and can be seen shyly staring into the camera.

sorry mods for my repeated fail

With Big Bang winning just moments ago on M! Countdown, VIPs had more to look forward to this evening with the broadcast of Big Bang TV immediately after on Mnet.

Big Bang has certainly come back with a bang with a 1-hour special comeback show on SBS last Sunday, and today, Mnet aired a special program as well, and it’s somewhat similar to SBS’s offering.

Created by the producers of ‘Big Bang TV‘ and ‘2NE1 TV’, the title song of Big Bang’s 4th mini album, ‘TONIGHT‘, as well as five other songs included in the album, will be performed by Big Bang on stage and broadcast on cable TV for the first time. In addition, the members impressions about their comeback, as well as the album making process and behind-the-scenes footage will be shown, finally satisfying the thirst fans have felt while waiting for Big Bang’s return.

Check it out below!

After the 1-hour comeback special SBS organized for Big Bang, a lot of attention is being given to whether or not Big Bang will make a comeback on MBC and KBS.

Big Bang’s agency, YG entertainment, was criticized last year because their artists were not seen on ‘Music Bank’s end of the year performances, nor did they attend KBS’s Gayo Festival because of issues they had with KBS. Because of this a lot of interest has been forming regarding what move Big Bang plans to take with their comeback.

But for this album as well, it has been revealed that YG’s side has been uncooperative about appearing on KBS. Kim So Hang, Music Bank’s PD, spoke with Newsen on March 3rd and said, “Big Bang made a comeback last week with SBS, but they will not appear on “Music Bank” this week.”

He continued, “KBS’s side offered Big Bang to appear on Music Bank but they refused the request. They didn’t seem reluctant of the offer. Music Bank’s side left an opportunity opened for them to appear but YG’s side rejected it so there’s nothing that can be done.”

Lastly he added, “Whether Big Bang will appear on KBS in the future has still not been decided.”

Meanwhile Big Bang recentely released a new album and made a 1-hour comeback through SBS, "Big Bang Comeback Show", that has been controversial.

Shinhwa’s Kim Dong Wan and After School’s Kahi will be performing a duet together on this week’s episode of SBS’s “Kim Jung Eun’s Chocolate“!

Viewers should look forward to their emotional cover of Park Sun Ju and Kim Bum Soo’s “Male and Female“, in addition to Kahi’s dance performance of Shinhwa’s “Wild Eyes“.

Kim Dong Wan also revealed that he shares a special connection with Kahi, which stretches back to their junior high years. He explained, “In junior high, I attended the same church as Kahi, but we didn’t know until after we debuted.”

Check out their performances at 12 AM KST on March 6th!

I am excite. XD
Collapse