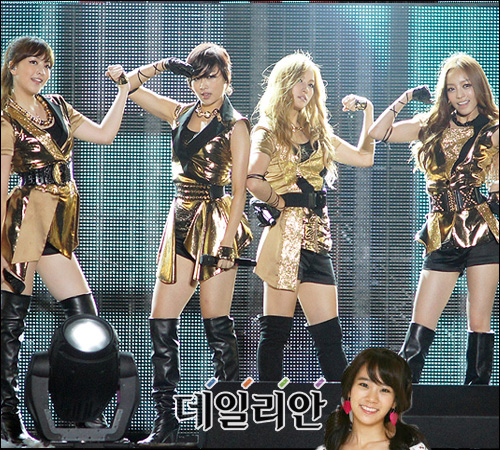 Korean girl group, KARA, has released their music video collection DVD “KARA BEST CLIPS” last week and it topped Oricon’s Weekly Composite DVD Ranking chart; selling around 132,000 copies. KARA has personally been first in the single, album and DVD rankings. However, it’s been revealed that they’re the first foreign female artist to top the composite DVD ranking chart since its inception in 1999.

Furthermore, KARA sold 132,000 copies of their music video collection “KARA BEST CLIPS” in their first week and this is the greatest amount sold for a music video collection for a female artist; not including live performance DVDs. The previous top seller was Kuraki Mai’s “FIRST CUT” (11/20 2000), which sold 99,000 copies. Kuraki has held the record for 10 years and 3 months, but KARA has just taken her record away.

In total, there have been only 6 foreign artists who have made it to number one on the Weekly DVD Composite Ranking: The Beatles, Led Zeppelin, Tohoshinki (TVXQ), JUNSU/JEJUNG/YUCHUN (JYJ) and Michael Jackson.

List of Weekly Composite DVD #1 Ranking’s by a foreign artist:

ZE:A’s Kwang Hee has become a household name on variety programs for his hilarious antics and shocking confessions. He’s now the #1 most sought after guest, and is even lined up to make a cameo appearance on KBS’s upcoming drama, “Homicide Division.”

When asked about previously headlining for his plastic surgery confessions, he revealed, “There’s nothing bad about it. My agency told me to stop talking about it on shows at first, but it ended up working out because everyone enjoyed it. I made enough money to pay my parents back for the money they spent on my plastic surgery (laughter). The only thing I’m worried about is misleading others into thinking that plastic surgery is an easy decision. Everyone, please think hard before you make your decision!”

we got married you say?

I kind of wish he would've done something more extreme, but thankfully the youngins were spared from Heechul's wrath~

For the first time in seven years, HOT will be coming together in celebration of member Lee Jae Won being discharged from the army.

On the morning of March 7th, Moon Hee Jun, Tony An, Kangta, and Jang Woo Hyuk will be gathering at the 28th Division Unit in Kyungki-do to congratulate Lee Jae Won on his discharge.

Through Sidus HQ, Moon Hee Jun commented, “I can already feel a lump in my throat. My heart swells at being able to feel our unchanging friendships once more. It’s a special event for maknae Jae Won, which makes it all the more special.”

The last time fans were able to see the members together was for SBS’s “Star Hall” in 2004.

Source: allkpop and Newsen via Nate

I can't wait for the photos. ♥

The streets of Myungdong have been blocked off due to Kim Soo Hyun and T-ara’s Eunjung.

On March 5th, actor Kim Soo Hyun and T-ara’s Eunjung attended Spris‘ Dream Project event in Myungdong, Seoul, and as soon as the two arrived in Myungdong, the streets became packed to the point where people were not able to get around like usual.

Both Kim Soo Hyun and Eunjung starred in the ever-so-popular ‘Dream High‘, and in the drama, Kim Soo Hyun played the role of Song Sam Dong and Eunjung played the role of Baekhee. Both received much love from the viewers for their acting, and thanks to the drama, the two have received much interest from fashion brands and could be considered to be the blue chip of the commercial industry.

They have received much interest for their Spris music drama CF where they displayed their singing and dancing skills as well. 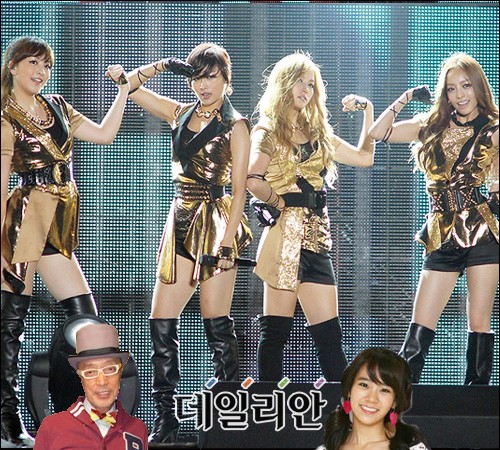 Terry Ito, an influential figure in Japanese television, recently shared his thoughts on KARA in his online column, which was titled, “Let’s start a KARA shouldn’t disband movement!”.

Within the posted article, Ito used his knowledge of the popular K-pop girl group, who are currently going through a dispute with their agency. Being the age that he is, he speaks about still remembering which member is Gyuri, which member is Seungyeon, and how he knows who Nicole, Hara, and Ji-yeon are. From the beginning of his post, he referred to the “KARA should just disband” movement that’s going on within internet portals. He addressed this by saying that, “It would be a waste if they disbanded.”

When hearing about the dispute KARA is currently going through with their agency, Terry Ito expressed how he felt he couldn’t just sit around. He hopes that KARA and their agency will see that Japanese fans wish them the best, and that they are rooting for them. Even with this complicated ordeal going on, he shows his wish for the chaos to just go away. He commented on his column saying that, “I hear a voice saying it’s not as easy as wishing this would stop, but at the same time, we can’t give up hope. We shouldn’t say that the so called ’slave contract’ Korean entertainment industry is behind, and compare it with the Japanese entertainment industry either, because that will solve nothing.”

He made a reference in his post about the people of Egypt who used Twitter and the internet as tools to drive President Mubarak out of office. He wrote, “One small rally can change the world. The sexy hip dance has appeal because the five members of KARA are doing it together. There will be no merit to anyone if the group disbanded. KARA can’t go through a tragedy like TVXQ,” showing his concern and hope for KARA.

He concluded his article by showing his desire to join the “KARA should stay together” movement.

Although KARA will be releasing their new single “Jet Coaster Love” later this month, their dispute with their agency is not over and continues to worry fans everywhere. However, it is certain that Japanese fans like Terry Ito wish KARA the best and don’t wish to see them disband.

lol changmin's mom's such a sweetheart
oh, my son~

Edited: added part 3 under the cut

4minute's maknae, Sohyun has been garnering so much attention because of her recently uploaded selcas.

4 days ago, Sohyun tweeted together with the above picture, "Pudding Camera is funny~~♥♥what am i doing right now? kekeke."

During the recording of the latest episode of '4minute's Mr. Teacher', G.NA made a surprise visit to her labelmate's dorms.

G.NA and 4minute sat around a table and had a friendly chat. During the conversation, Hyunah said "I recall the time when we used to live together" and made the girls remember their past dorm life spent together.

G.NA started revealing Hyunah's sleeping habits stating "Still, I'm glad you're sleeping alone in your bed. Whenever my schedule was over and that I came back home, Hyunah was sleeping, stretching all over the bed.", to what Jihyun added "Hyunah dances unawares when she's sleeping".

Hereupon, the members confirmed "It's true. Hyunah dances and talks while sleeping" and burst into laughing.

A Japanese magazine recently made reports on SNSD, which has angered fans. The reports stated up that SNSD may also disband or may have members leave the group. On March 4th, SM Entertainment told Star News, "These reports in Japan were meant to only be malicious rumors and are unfounded rumors" and "This issue isn't worth dealing with."

Their article states, "The cause started due to academic differences" and "There are high school graduates, college students, and American educated members. Because of this, rivalry arose."

The article continues to say, "SNSD are in the same agency as TVXQ and saw first hand the consequences of going against the company. It is unlikely they will go through the same situation as KARA. However, it is likely that one or two members will withdraw from the group."

Fans have reacted to the article and said, "They have created malicious reports on the Hallyu craze because of some sort of inferiority complex," and "This is not worth responding."

This is not the first time that malicious reports have been made against SNSD. SNSD is currently working on releasing their 3rd Japanese single. What did you think of the article?

SOUTH Korean director Kim Ji Woon says his latest film, I saw the Devil, is a study in evil he hopes will strike a chord with US audiences as much as it did in his homeland.

About a man seeking violent revenge against a serial killer for slaying his pregnant girlfriend, the movie tells how, 'to win over evil, the main character has to become evil hismelf,' he said.

'This is the first script I didn't write myself,' said the 46-year-old, an established filmmaker in South Korea, on the eve of the film's opening in the United States this weekend.

'There was not any specific news that drew me to this story, but there was a time where there were major serial killers in Korea,' he told AFP in Los Angeles.

Kim is known for trying his hand at a range of film types, from horror flicks like A Tale of Two Sisters (2003) to action movies like 2005's A Bittersweet Life and The Good, the Bad and the Weird (2008).

This time he gets his teeth into a thriller, in the form of a secret agent bent on revenging his lover's death by causing her killer as much pain as possible before killing him. Recently, in various online forums, Infinite's L's day-to-day appearances, held in pictures, are cropping up on the internet, garnering attention.

In the picture, L showed his sophisticated fashion sense with his warmer that he wrapped around himself apparently uncaringly, and showed off his pictorial-worthy hotness even between normal passerbys. Fans are concentrating on this new fresh yet humble teen-like self especially because so far, he mostly showed a cutting group dance as well as a masculine stage outfit in programs.

Netizens who saw the photo showed feverish reactions such as, "He's hot enough to be a fashion model", "Average clothing becomes pictorial-worthy if L wears it", and "He is truthfully a crazy aura idol".

On the other hand, Infinite is readying their second single album.


This was out in December last year, hence the sentence "readying their second single album".
But L looked really cute in long hair, he should grow it again for their next comeback. Group BEAST’s activities in Japan have become even bigger.

On March 2nd, BEAST’s DVD <Genesis of BEAST> rose to first spot on the charts of Japan’s largest music store, Tower Trade. This DVD which reached the top as soon as it was released, is holding the first spot for two weeks now. The enthusiasm and fervor of Japanese fans were confirmed after the DVD even grabbed the third spot on the Oricon charts on the 2nd of this month.

On February 16th, BEAST first released their Japanese version of the single <Shock> in Japan. Through this single, BEAST opened fire to full-fledged Japanese activities. With the DVD, BEAST has exceeded expectations on various charts and it is anticipated that fervor will increase with a single that will be released soon. BEAST released their single in time to cross over to Japan and start single promotional activities.

BEAST’s company, CUBE Entertainment officials stated, “Through the last showcase, the members have gained confidence in participating in Japnaese activities” and “They are becoming increasily fluent in Japanese and they hope to meet the Japanese fans soon with a good image.”

Like their title song though, whatever it's called too many translations for it.
Collapse