a clip from their 'A Pink News' show.
no subs, though.

Hallyu stars have linked arms to help with the damages in Japan. Having received much love from their neighboring country, they have started relief efforts for this sad reality.

One Hallyu-star entertainment agency stated "Japan is where the Hallyu-stars made their money, I think it's a definite that we should repay them back and help in every way possible." Another, "The recent earthquake damages can negatively impact (shrink) the Hallyu wave and are not of help to anyone. Just as Hallyu came about as a result of cultural exchange (literally, 'an exchange of heart'), we must do what we can to deliver our hearts to them" (Thanks

i read this article on naver and did a quick translation so sorry in advance if you think it sucks. if any korean speakers out there catch any mistakes, lemme know.
also, i think its nice to see koreans and japanese people coming together. instead of that bitter sentiment koreans tend to have towards the japanese

LMAO shame on you G.O for trying to corrupt innocent naive Joonie!

Jordan, son of Korean hip-hop’s hottest couple, is lucky to have such loving parents!

Tiger JK and Yoon Mirae have been taking a interest in preventing child abuse. Recently, the two “guardian angels” sat down for an interview with KBS 2TV’s “Entertainment Tonight“, during the midst of their photoshoot.

Tiger JK said, “I never once physically punished Jordan.” He added, with pride, “My father also never laid hands on me.”

Meanwhile, the two also commented about their marriage, in which Tiger JK and Yoon Mirae said, “We’ll be playing this game of tug-and-war until we’re 70“.

Singer IU was a guest on the March 11th broadcast of “Yoo Hee Yeol’s Sketchbook“, during which she sang three songs: “Dreaming” (from “Dream High“), “I’d Do It All Again” (originally by Corinne Bailey Rae), and “The Story Only I Didn’t Know” (IU’s current title track).

What celebrities wear is a way to know more about your favorite idols as well as to see who is in vogue and who is not. 4minute's member Heo GaYoon became the hot topic of the day with her surprising "Airport Fashion".

This week will be the last week fans will be able to see G-Dragon smash a guitar on stage for “Tonight,” as the group will no longer be putting on their special ‘guitar performance’ in favor of changing up their routine.

YG Entertainment revealed that this week’s episode of SBS’s “Inkigayo” will be the last of the guitar smashing, and reasoned, “We can’t show the same performance every time.  We’re currently planning something new to take the place of the guitar performance.  It’ll be a new choreography, we won’t be breaking anything else.”

The guitar performance was said to have begun as G-Dragon‘s idea for the acoustic segment of the song.  After listening, he asked himself, “Should I just break it?”

When asked about the guitars that were broken, and whether they were new, YG officials responded, “They are, of course, new.  Before every stage, we bought new guitars, and each are worth about $150 USD.”

smh at all the guitars tsk tsk exhibitionism!!!!

source: NTSKoreaYT
*note to the mods, the size of the first video is at its smallest. 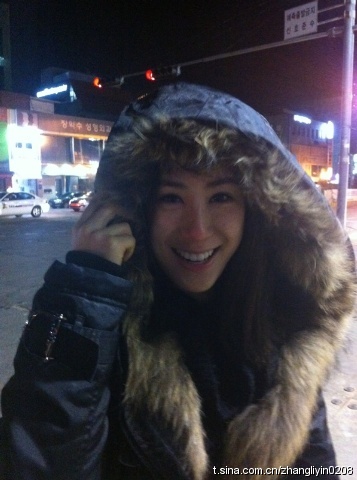 It's better written in Chinese at her Weibo, and it really shows how sincere she is.

The talented duo of Davichi recently participated in the OST for SBS’s “Smile, Mother“, by singing the drama’s main title track, “One Person.”

Member Kang Min Kyung plays the leading role in the drama as ‘Shin Dalrae’, a young woman who dreams of becoming an actress. The plot centers around the happiness she and her mother find as they work to understand each other and overcome obstacles.

“One Person” was composed by Shin In Su and written by Jo Eun Hee, and features a sad piano melody with a modern string addition. Check it out below!

A designer in the running on the cable channel On Style's Project Runway Korea Season 3, Kwon Soon Soo, has recently been garnering interest due to her striking resemblance to 4minute's leader Nam Ji Hyun.

She designed an elegant and cute spring dress and used bright colors such as light pink with a combination of purple nuances and various materials.

She has also attracted the attention of many and received a good response when she displayed her acting skills with her debut role in SBS Drama "It's Okay, Daddy's Girl" as Shin Sun Hae and her cameo in Lee Hyun's "You're the Best of my Life" music video.

Netizens commented about this: "I also noticed their similarities while watching the show." and "If you told me that they were twin sisters, I would believe it!". Others were also quoted saying "If 4minute came on the show, it would have been good." On March 13th, ZE:A’s Junyoung guested on KBS 2TV’s “Dream Team 2” and confessed that maknae Dongjun had a crush on a girl group member.

When asked why he decided to come out to the show, Junyoung replied, “The young maknae is on the show, how can I just stand by and watch? I came to intimidate him, of course!”

Before taking part in his first match, he randomly confessed, “Dongjun has a crush on a girl group member.” When Dongjun responded with shock, Lee Chang Myung immediately exclaimed, “The fact that Dongjun is surprised means that it’s true!”

I got a feeling that Sungyeol choreographed this trot version. It's hilarious but cute XD

To smuggle facts into or out of North Korea is to risk imprisonment and even execution. Yet today, aided by a half-dozen stealthy media organizations outside the country, citizen-journalists are using technologies new and old to break the regime’s iron grip on information. Will the truth set a nation free?

On March 12th, Jewelry’s new member, Ye Won, guested on MBC’s “Quiz That Changes the World“, and revealed that she debuted with over 4,000 replies of anti-hate for being called a look-alike to actress Ha Ji Won.

poor tiny girl got so much hate for something thats not even her fault ;-;

cnblue
Official pictures are set to release on March 17th.
The music video will be unveiled on the 21st.