Last week, it was announced that SNSD would be the new endorsers for Yakult Korea and now, the first promotional pictures of the ladies promoting the brand have surfaced.

The girls are promoting what appears to be Yakult’s “Look” product and definitely, they are telling you to look at them as they wear simple t-shirts and jeans for the shoot. They definitely look fabulous in these ads and makes you only want to see the CF when it comes out.

This post is brought to you by HyeongKon's abs

i'll be uploading more as they are posted on youtube!!

According to reports, MBLAQ‘s G.O has decided to postpone his sub-unit activities and debut his acting career.

Recently, the idol was cast for SBS‘s upcoming drama, ‘Phantom‘ and as a result, he has decided to postpone his scheduled sub-unit activity with label mate, Mir.

According to his label company, J.Tune Camp, “We tried to make the sub-unit activities our priority as we even finished the recording for the title track.  However, we decided choose the drama as it would provide a good opportunity to showcase MBLAQ’s potential and abilities.”

As for the sub-unit, J.Tune assured, “As much as our fans have been anticipating, we plan to increase the quality and present it as a gift to our fans in the future.”

G.O, who will be starring in his first fixed role through ‘Phantom’, will be playing the role of Lee Tae Kyun, who is a cyber investigator.  He will be acting alongside actor So Ji Sub and actress Lee Yeon Hee.

source: akp + my daily via nate

I love MBLAQ but this is probably a good thing, they need to take a break from music The latest in the breast-feeding wars comes all the way from South Korea and involves the epitome of American snacktime: the Oreo cookie.

An ad from Agency Cheil Worldwide pairs the crème-filled treat with an unlikely image: a super-cute baby holding the cookie while nursing on his mama’s breast. The accompanying slogan: “Milk’s favorite cookie.” (It's unclear if Nabisco, maker of Oreos, is actually using the ad or if the agency just created it.)

Girls' Generation, 2NE1, GD&TOP, JYJ, Wonder Girls and others from South Korea are expanding audiences in U.S. beyond Korean Americans.

The nine young women of Girls' Generation sauntered onto the performance stage of "Late Show With David Letterman." Flanked by a DJ and live drummer, the South Korean pop group wore lacy black mini-dresses and thigh-high leather boots, as if they were hosting a goth cocktail party. It was a rare American network television performance from a South Korean music group.

The song they performed on the January show, a slinky bit of minor-key dance-pop called "The Boys," owed an obvious debt to Kelis' catcalling hit "Milkshake." The band's gently lascivious choreography underscored the track's sex-appeal boasts: lead singer Kim Taeyeon made come-hither hand gestures while her bandmates pulled PG-13 versions ofLady Gaga's alien body bends. The song was in English, but the message was clear in any language. This was something new yet uncannily familiar on the American pop scene.

"As soon as I heard that we'd be performing there, I ran screaming and crying up and down our house," said Girls' Generation's Diamond Bar-raised, Korean American singer Tiffany. "The other members were just like, 'Huh?'"
( Collapse )

Singer and actress Yoona of Girls’ Generation discussed the hectic schedule and outstanding physical health of the group’s members.

During an interview on April 27th for KBS 2TV‘s drama ‘Love Rain‘, Yoona commented, “It’s a killer schedule… I think that it’s a little different from the other actors. Though other actors can usually rest after filming for the drama, there’s either an endorsement shoot to go to or etc., Even when there’s no drama filming for the day, I can’t rest because I need to either practice with the other Girls’ Generation members or fulfill another thing in my schedule. I think that’s why I hear [that it must be tough].”

She went on, “Truthfully, I do get tired sometimes. But the bright side is that since there are 9 members, we can split up work. Sometimes a few of us shoot for an endorsement deal first or we share activities… Though everyone’s busy, no one has fainted yet (Laughs).”

Yoona then revealed that the girls sometimes joke around about ways to get out of their hectic lifestyle, stating,“Among the members, we’ll joke, ‘Someone please faint or something. We need to rest.’ I think everyone’s very physically strong and healthy. We all exercise a lot as well.”

Soldiers from rival North and South Korea eye one another across a thin strip of no man's land that - just barely - keeps their armies apart. The tension, they insist on both sides, is palpable.

So what's with the North Korean gift shop selling "See you in Pyongyang" T-shirts for 12 euros apiece?

Is the Demilitarised Zone between the two Koreas the world's most dangerous place, or a tourist trap? Sometimes it's hard to tell the difference.
( Collapse )

On the episode, Suzy paired up with Kim Shin Young and set out to find Yonghwa. At the fifth mission location, Suzy and Kim Shin Young who finally ran into Yonghwa were to find the letters written on his body to figure out the whereabouts of the next location.

Kim Shin Young eagerly tried to strip Yonghwa of his clothes, which caused a shocked Yonghwa to say, “Suzy, turn around. I don’t want you to see me like this.” Suzy did as she was told, and Kim Shin Young began searching Yonghwa for clues. But she took longer than expected, and a curious Suzy hilariously asked, “Shin Young unni, do you need some help?”, causing Yonghwa to break into a nervous sweat.

After they found all the letters, Yonghwa remarked, “I can’t believe Suzy had to see me like this. I even tanned because I was going to be here today, but I had to have letters written on me, what is this?” 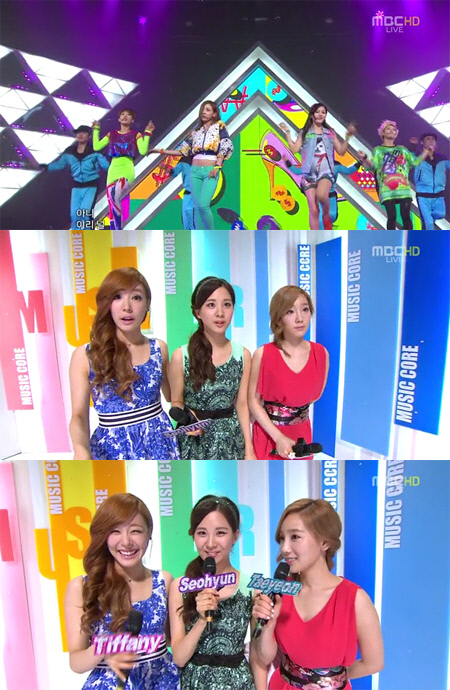 MBC‘s ‘Music Core‘ unfortunately suffered a broadcast accident on the April 28th episode, causing a slight shift in the order of the performances.

The cameras quickly cut back to the emcees, as they were a bit surprised and stated, “There seems to have been a broadcast accident. We apologize.” The accident was quickly resolved as B.A.P‘s comeback stage was introduced next followed by Sunny Hill’s performance.

Fellow member SeungAh retweeted Misung’s tweet and wrote, “We could have a collaboration stage performance! How refreshing [The White Horse is Leaving].”

“The way Taetiseo are surprised is so cute,” viewers commented. “Sunny Hill, B.A.P, and Noel all suffered“, “Broadcast accidents seem to be frequent on Music“, and more.

Source: WILDROSES chatelaine's channel
i hope i got the cut correctly OTL

( Collapse )
And the album credits:

Source + place to get the original PDF file: BestFiction

(Mods, this is showing up a bit screwed up in my preview, should be fine though)
The solo shots are gorgeous, as expected.

The boys of B.A.P recently unleashed their latest EP ‘Power‘.

On the iTunes Top 10 Hip-Hop Albums chart, B.A.P’s ‘Power’ has placed 1st in both Canada and New Zealand, 2nd in Australia, and 3rd in Japan.

When seeing the B1A4 members, the reporters’ first responses were compliments filled with “so good-looking”. However, this is not the only factor to their explosive popularity. It is because they infinitely satisfy the fantasies of girls and noonas with their sincere friendliness that transforms B1A4 into not just any admiration subject, but ‘an oppa who seems like your first love’ or ‘a cute next door dongsaeng’.

B1A4, who showed their fresh charms last year through ‘O.K’ and ‘Beautiful Target’, are showing a strong energy this time through their title song, ‘Baby I’m Sorry’, after releasing their first official full length album, ‘IGNITION’.

B1A4, who are planning to finish their first official album’s promotions in Korea this week, showed their proud hearts by saying, “There were a lot of prejudiced thoughts about us. Since we often heard the phrase ‘visual group’, because of our fresh image during our 1st and 2nd album, we decided that we needed to show something else this time. So we personally participated in the composing and producing and we feel very satisfied because we feel that we expressed B1A4’s own colors well.”

It was recently announced that MBC would be airing a special documentary about Super Junior titled, "MBC Special - Super Junior Dreams of a K-Pop Legend." The special was aired on April 27, and it featured Super Junior’s concert in France that was held on April 6, as well as the heartfelt personal stories of the members.

Korea and Japan have been on a battle on the petition board [We the People] of the White House website regarding the issue of naming the East Sea, on the 21st of April. The battle has sparked criticism from Japanese netizens against the marking of East Sea, which has since spread rapidly online.

There is a continuous stream of posts on the website 2ch (www.2ch.net) reproaching the petition from Korea to mark the Sea as the East Sea. This website is an anonymous online community with the largest number of simultaneous log-ins in the world.

A Japanese netizen claimed that ‘it is dogmatic of Korea to mark the sea as East Sea, as nowhere else in the East Asia – including Japan, Taiwan and China – refer to it as the East Sea.’

Another netizen rolled out some raw insults, saying that Korea has little influence on the international community, and the East Sea would have been called the Pacific Ocean if Japan didn’t exist.

There were also posts against the name East Sea that instead suggested using the name ‘Gyeong-Hae’, one of the archaic names for the East Sea.

The writer explained that Gyeong-Hae would be suitable, because Japan can accept it as an old name and Korea could approve it since the name doesn’t include the word ‘Japan.’
( Collapse )