ENG> Dear BABYz, we’re happy to announce that B.A.P will release their first mini album soon. And before the first mini album, the first song ‘Goodbye’ will be unveiled at today’s midnight. Unlike ‘WARRIOR’ and ‘POWER,’ ‘Goodbye’ is the traditional rock, which will show the other talent of B.A.P. Please give B.A.P cheers and support!

On July 5th, Gyuri uploaded a picture of her yawning dog along with the caption, “Hum, tired.”

Upon seeing the tweet, Eunjung sweetly told Gyuri that the KARA member was her remedy to tiredness, “As I was getting up, you called me… #_#. I heard your voice and I felt a lot better kekeke.”

In response to Gyuri’s flirty message, Eunjung commented with an amused, “Kyakkyakkyakkyakkyak, oh you too, really…. ♥♥♥”

While Gyuri and Eunjung enjoyed a brief but affectionate conversation on Twitter, T-ara’s Hyomin shot Eunjung a sad tweet, “How come when I call, you don’t [talk to me] in a sexy [voice]….” Hyomin’s jealousy had evoked laughter among fans, while Eunjung and Gyuri’s display of affection (1988-line) had evoked many smiles.

I honestly don't think it's anything special but good for them, at least.

FNC Entertainment, home to F.T. Island, CNBLUE, Juniel, and more, is gearing up to finally debut its new girl group.

A representative of the agency revealed, “We will be revealing our rookie girl group through the teaser website on July 13th and the group will officially begin their activities. The team is a 7+1 member girl group, so please show lots of interest.”

As F.T. Island, CNBLUE, and Juniel are all known for their talent and individual colors, many are now highly anticipating the debut of FNC Entertainment’s first girl group, curious to know about the group’s musical flavor as well as their concept.

We aren’t really sure what “7+1″ means, is it the name, the number of members? Hopefully, the upcoming teasers will provide some clues. Until then, tell us what your thought on a 7+1 member girl group in the comments below.

2NE1’s shock factor generally lies around the territory of clothes and hairstyles. This time, however, the girls decided play around with their make up as they pose for promotional posters for “New Evolution,” the girls’ upcoming world tour.
( Collapse )
Source : Allkpop, Naver News

It has been reported that 2NE1 Minzy‘s grandmother, Madam Gong Ok Jin, passed away at the age of 81 on the early morning of July 9th.
( Collapse )
Source: Allkpop, TV Daily via Nate, Sports Seoul via Nate

Members of DSP Media’s new girl group, PURETTY, are stars even before debut.

PURETTY members JaeEun, SiYoon, ChaeKyung, and SoMin all had advertising contracts with variety of famous companies ranging from food to IT and they have been given the name “Blue-chip of Advertising”.

In March, it was revealed that Yedang Entertainment will be producing its first male group, leaving fans only a photo of the silhouette of the 6-member group.

Yedang Entertainment previously created the girl group CHI CHI, who recently made their return with the 3rd single, "Love is Energy."

It was revealed on July 9th that the 6-member group has been named C Clown, standing for "Crown Clown." It has been said that hit maker producer Shinsadong Tiger will be the one in charge of producing their debut track.

In addition, the first teaser for C Clown's debut track was released. Each of the member's face is revealed in a short scene before a clip of a song is heard.

I edited the post to make amends to the member profiles ^^

Yuri thanks you for your time ❤ ❤

The leaders took the time to answer how they were selected to become the leaders of their respective groups.

Hyosung, Gyuri, and Victoria revealed that they were selected because they were the eldest of their group, while JeA was chosen as the leader since she was the one who recruited the members of Brown Eyed Girls, and Sun was selected for being the longest trainee of six years. Hyorin did not give an answer.

In response to Sunye, MC Yoo Jae Suk remarked, “Yes they should make you the leader if you’ve worked that hard,” causing fellow emcee Nayoung to hilariously blurt, “What is there to train for six years?” causing everyone in to the studio to burst out laughing.

In addition, each leader bragged about their teams and shared some of the hardships of being a leader.

There used to be a time in when having a job in singing and dancing was regarded as a shameful thing in Korea. But now that is something very hard to believe for younger generations here. Singers are adored and get praised for their god-given talents, and without a doubt, they are now the leaders of Korean culture and fashion; and that’s where 2NE1 stands.

2NE1, debuted in 2009, is a group of four transgressive young women artists pioneering new music styles and fashion. Going beyond synchronized dance routines and repetitive chorus, they were the first K-pop group to dominate local online music charts with five singles in a row: ““Don’t Cry,” “Lonely,” “I Am The Best,” “Hate You” and “Ugly.”

If you think the group’s international acclaim in a little over three years of their singing career is hard to believe, wait till you hear what is next: “NEW EVOLUTION.”

In between releasing the new single and going for the theatrical run, 2NE1 told the magazine about their world tour, “NEW EVOLUTION,” and their new tune– a cross-genre song of electronic and trot music– at the YG Entertainment office building in Seoul on July 6.

On July 5th, Jonghyun shared on his Twitter, “I made it! It was harder than I thought.. Even pizza, I don’t eat just any pizza! It’s a deep dish right here! Inside this high level of dough is packed with lots of cheese! That is why if you slice it.. the cheese falls apart! Omg I made too much.. it tastes good but because so much hard work went into it, it doesn’t seem like I’ll make it again”, along with a delicious photo of the dish.

The photos show the pizza masterpiece made by Jonghyun himself. The deep-dough pizza is filled with various toppings and lots of cheese that is sure to make your mouth water.

Fans responded, “I guess Jonghyun’s powerful voice wasn’t the only thing that was perfect.. his cooking skills are great as well”, “Whoever Jonghyun marries will be blessed for sure”, and “Jonghyun’s charms seem limitless.. this cooking idol!”

DOES THIS MAN HAVE NO FLAWS

YG Entertainment has announced that 2NE1 has cancelled their comeback stage for Mnet’s ‘M! Countdown‘, which was scheduled to be held on July 12th.

On July 5th, the ladies made a comeback after a one year hiatus with a track titled ‘I Love You‘ and kicked off their various music program promotions beginning with ‘Inkigayo‘ on the 8th.

However, with the passing of Minzy‘s great aunt (often referred to as her “grandmother” as great aunt in Korean is literally “aunt grandmother”), Gong Ok Jin, who is famous for being a pioneer in Korean cultural dance, 2NE1 has cancelled their upcoming ‘M! Countdown’ performance.

Gong Ok Jin’s funeral will be attended by those in Korean classical music and culture and the funeral is planned to span four days.

A representative of YG Entertainment stated, “Minzy wants to be there to send off her great aunt. Staff members at the broadcasting companies were very understanding and allowed us to cancel our appearance for this week.”

The members of 2NE1 will still hold the “me2day star chatting” event with their fans through me2day on the 11th, with the exception of Minzy.

All four ladies of 2NE1 will stand on the stage together after the funeral period for Gong Ok Jin has passed.

Source: AKP
It's good YG's allowing her to grieve.

pretty solid mini, I enjoyed it. Favourites are Day By Day and Don't Leave.

The Korean Alphabet known as ‘Hangul’ is widely believed to have been invented by the fourth King of the Joseon Dynasty, Sejong the Great. The project was completed by around 1444 and first published in 1446 in a text known as the ‘Hunmin jeong-eum’ [훈민정음 해] or ‘The Proper Sounds for the Education of the People’.

King Sejong is said to have created the script fearing that the majority of his population were illiterate, as the national language was based on Chinese characters and therefore restricted to aristocratic males. ‘Hangul’ was designed to allow the masses the pleasure to read and write.

As Sejong states in the preface to his work, “A wise man can acquaint himself with it before the morning is over; a stupid man can learn it in the space of ten days.” After his death King Sejong left a great legacy and is still revered today for providing the nation with a greater sense of national identity, away from the clutches of the Chinese cultural sphere.

However, with Dr Lee’s new claims surfacing that Sejong’s script was based on ancient findings inscribed on Chinese ‘knife money’, will his legacy be shattered or will the nation reject the scholars findings? This topic has sparked hot debate across Korea and indeed China, featuring heavily on this week’s news sites and blogs. Much online controversy has stemmed from the national identity debate, with the Chinese revelling in these findings and claiming once more that Korea is a part of China.

This is blowing my mind, tbh. Kind of like those theorists who say Black people invented Kung Fu, were the first Samurai...except less crazy. anyone else heard those theories? Also, is October 9 going to be burned off of calendars all over SK? Artist Cho PD has complaints of pain after being involved in a car accident on the 7th, and is foreseen to inevitably be admitted to the hospital.
( Collapse )
Source: OSEN
Translated By: kroongho @ BLOCKBINTL (Must have account to view)
I hope he recovers soon After 2NE1’s comeback stage on SBS’ Inkigayo for the group’s new single I Love You was met withstrong criticism for its use of live animals during the performance, YG Entertainment has issued an apology.

However, YG Entertainment finally spoke up about the issue saying, “We enlisted the help of animal trainers and other animal experts and did the stage performance with their consultation. If our efforts to create a good performance brought discomfort to viewers we apologize. We will focus on being more careful in the future.”

Watch the performance at the center of debate below!

Because parrot oppar was not amused

lol this sounds like an anime soundtrack.
edit: ok now that I've heard the full song, it's actually awesome! 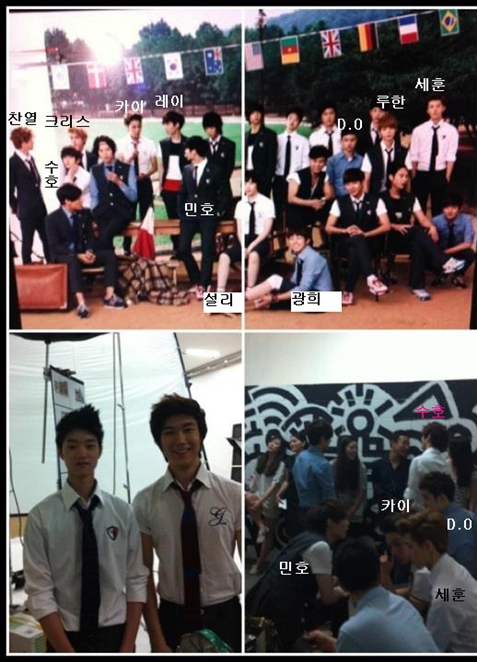 It’s been rumored that members of EXO have been spotted at the filming of the upcoming drama ‘To the Beautiful You‘!

On an online community board, a post was uploaded with the picture above with the caption, “The idols that will be appearing on ‘To the Beautiful You’”.

Although the photos are not clear enough to tell who is who for the most part, with quite a few fan accounts surfacing that mention seeing the EXO members, it seems we can expect the members to at least make a cameo in the upcoming drama!

Fans commented, “A lot of EXO members are going to be on the show?”, “Minho looks great in his school uniform”, “SM Family seems to made an appearance”.

SMH at sasaengs and all their enablers.