“As he was known as one of the best dancers even prior to his debut as Seo Taiji & Boys, Yang Hyun Suk quickly spotted the most important dance parts and filmed it to perfectly deliver the overall feel of the song and choreography. He felt bad for not having spent much time with 2NE1 before their comeback, and to make up for it, Yang Hyun Suk joined the girls’ practice, even though it was a weekend,” YG Entertainment said in a statement.

In fact, this is not the first time Yang Hyun Suk took on the cameraman role. Last year, he recorded the “I Am the Best” dance practice video on his own, surprising many fans that were unaware of his adroit filming skills.

Meanwhile 2NE1 returned with their new digital single “I Love You” last week. They are currently preparing for their upcoming global tour concert, “New Evolution.”

Check out the dance practice video for “I Love You” below!

time for f(x) members individual tags, mods? sulli has a drama, victoria has a drama, luna had a drama, amber has friends, krystal has a tag. idk.

Yeah, I'm not too excited for this. Sounds kinda bad but I'll wait for the full version.

After two years, Psy has announced that he will be making a comeback with his new album ‘Psy’s Best Sixth’. After releasing the tracklist and album cover, the singer has unveiled an entertaining MV teaser for one of his tracks, “Gangnam Style“.
( Collapse )
Source: Allkpop, officialpsy@youtube

The Omonatheydidn't! facebook page got this message from Alltv Canada:

Do you live close to Toronto?

Take advantage of this opportunity. Who knows, we might stan for you someday. Don't forget us little people when you get famous!

Having already premiered successfully in countries such as Korea, Taiwan, Japan and Singapore, SM Entertainment's documentary film "I AM" will finally be arriving in the US!

Scheduled to be released on July 13 at Los Angeles's CGV Cinemas, "I AM" will run for a week in Los Angeles. To celebrate the release of the movie, CJ Entertainment has initiated a special promotion event for all Southern California residents interested in seeing the film. The special promotion event is a free "I AM" movie tickets giveaway with one lucky winner being announced each day until the Los Angeles premiere date of the film. Those who are interested must like CJ Entertainment's official American Facebook page and take part in a promotional poll. 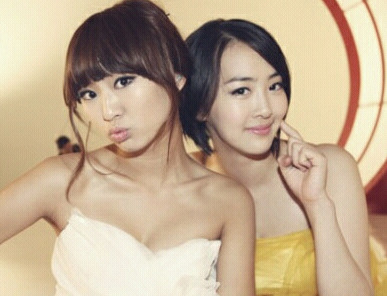 SISTAR‘s Dasom appeared on KBS “Happy Together 3” and talked about how her agency’s CEO treats her differently from the way he treats a fellow SISTAR member Hyorin. Dasom said, “The CEO didn’t call me or anything on my birthday. But on Hyorin’s birthday, he called her right away and wished her a happy birthday.”

Dasom shared another experience where she felt like the CEO was favoring Hyorin over her. She explained, “Once, I was hospitalized during an overseas performance because I wasn’t feeling good. Nobody from the agency came to visit me or see how I’m doing. On the other hand when Hyorin got sick, our CEO bought some snacks and went to see how she was doing at the hospital. I couldn’t help it but to cry when I saw that.”

I just started listening to SISTAR and I like them all bases of their performances though I LOVE Hyorin's vocals . This sucks for the rest of the members though. Is there any other favoritism in groups that yall know about? </>

Park Jung-Hyun's 8th album "Parallax" is being released in three years on June 19th of 2012.

The title song "I am Sorry" is a special song. Its lyrics contain the complex feelings of sadness, resentment, apology, and relief of no longer being able to trust in one's loved one. Featuring a lyrical melody, it is a remake of the song "Mientes" by the famous Mexican group "Camila", popular in North America as it ranked high on the Billboard Latin Pop Chart when released in 2009.

Although it was not easy, Don Spike who arranged the song and the lyricist Chung Seok-Won worked hard to create a song that matched Park Jung-Hyun, even though it meant giving up their copyright since the song was a remake. Moreover, Park Jung-Hyun went to the U.S. to record the song in order to bring out the exotic Latin feelings in the album. During this process, Park Jung-Hyun was praised by the local performers and staff for her emotions and an arrangement that they claimed surpassed the original.

i feel like she really made this version hers. like when i listen to it my mind wont automatically go to Camila's song, though obvs the similarities are there but i think she did an amazing job and her voice is beautiful as usual! plus i love that she was so random in choosing a spanish group to cover. wtf is up with that ending though?? oh and unf cha seung won

GLAM will officially debut on July 16th, in the mean time check out the making of music video for “Party (XXO)”.
allkpop

I think this clip of the song will probably make people more excited about the song. Zinni and Park Jiyeon sound great rapping together :)

On the July 12th broadcast of SBS E!s ‘K-STAR News’, Girls’ Generation member YoonA was revealed to be the girl group ‘center’ member, with the most profitable activities across various fields.

Girls’ Generation is currently in the lead when it comes to being considered the nation’s girl group. Yet even among all the members who have each achieved such great popularity, member YoonA has earned the greatest salary. On top of the payments she receives as an artist, YoonA has landed a total of 20 advertisement deals and also completed another drama. As a result, YoonA’s total income has exceeded 4 billion KRW (approx. $3.5 million US dollars) after just the first half of this year.

A 31-year-old middle school teacher has been convicted of sexual harassment for using his mobile phone to record about 240 women largely in the school and on subways for more than two years.

He was caught secretly photographing a woman under her skirt on the stairs of a Seoul subway station. Police found more than 500 indecent video files saved on his memory card. Victims included students, parents and even female teachers he knows well.

The teacher was dismissed from his post immediately. In May, he received a suspended sentence of 10 months in prison and 40 hours of education on sexual violations.

The incident shocked his colleagues and students, who never thought he was a pervert. Normal in appearance and everyday life, he told investigators that he was driven simply by curiosity.

wft. these "solutions". women only cars. no.
Collapse