Siwon and Donghae of K-Pop phenom Super Junior team up with Bench for its 25th anniversary.
( Collapse )
( Collapse )
Philippine Star

TBH, I am one of those ELFs who were waiting for them in the lobby... for 10 hours! But overall, this adds to my unforgettable "SJ in the Philippines" archives I'm compiling. :) As Henry said, Philippine ELFs are the loudest (stylized as LAUdest. XD) And yeah, I still believe that all the boys will come again together for another concert here in Manila. I still believe.

4minute Hyunah showed a sexy yet playful charm through her photoshoot with fashion magazine Nylon.A staff member revealed, "Hyunah radiated a cute charm and completed her photoshoot perfectly with natural posing.In other news, 4minute will release their newest Japanese single Love Tension on August 22 and is about to begin their Japanese promotions.

My k-indie queen is flawless as usual! The mini-album is so good and I haven't stopped listening to it since it came out. ♡ Another MV for another song should be coming up soon.

Singer Sean revealed that 2NE1‘s CL did some volunteering at a children’s center before heading out to the United States for the group’s tour.

Sean tweeted on the 17th, “Before departing for her concert in America, CL came to visit the children of Holt. She planned on spending an hour with them, but she fell in love with Dojoon and spent three hours feeding the children and playing with them. Both Dojoon and CL had a great time.”
( Collapse )
Source: Allkpop, Sean’s Twitter

During the recent filming of the drama, the singer, who will be playing herself, brought out her acting abilities to realistically portray the scene she was in. In the drama, Jihyun visits the hospital after her muscles go into shock due to falling from the stage. Despite the blazing hot weather, Jihyun managed to maintain a smile on her face and helped to create a lively and energetic atmosphere on set while working alongside actor Oh Ji Ho.
( Collapse )
Source- allkpop, NATE

I can't believe I missed this news!! I need more of Nam-actress~ I wish I looked gorgeous all the time like her XD

4minute recently went to the Singapore Flyer in a recent recording of QTV's 4minute Travel Maker. While chatting inside the ferris wheel, the members brought up that the Singapore Flyer is a popular place to propose and suggested that each member leave a message to her future spouse.

During Hyunah's turn, she shyly lowered her head and said, "Hello, future spouse, please take care of me in the future and give Hyunah lots of love." The other members immediately rejected her message and brought out laughter with their criticisms like, "That was awkward" and "Stop thinking about the fans".
( Collapse )
Source: Naver & 4MF

These guys are really cute :3

Why does Bom's hair look so horrible? I can't remember that the color was so... bright? Don't like Minzy's hair either T_T. CL & Dara look very good <3

awwwwwwwww ;______;
its good to know that their relationship is still fine :)

on another note i just saw photos of eli's comeback (?) hair on tumblr. it looks... interesting.

Maknae Sohyun received the question: “Rank 4minute members based on their looks”, to which she immediately gave her opinion without hesitation, showing her bold personality.

Based purely on facial appearance and not on her figure, member HyunA placed last.

Sohyun ranked, “2nd place Gayoon, 3rd place Jihyun, 4th place Jiyoon, and last place is HyunA unni.” The other members were accepting of the placement and tried to look calm in the midst of the maknae’s bold statement.

She continued confidently, “I’m first place. My value is increasing a lot right now. It’s my new transformation phase,” gaining herself sharp looks from her unnis, who couldn’t back any longer.

In addition to this ranking, 4minute will also reveal whether they have received confessions from male celebrities in the episode, so don’t forget to check out the broadcast of ’4minute’s Travel Maker’ at 11PM KST! 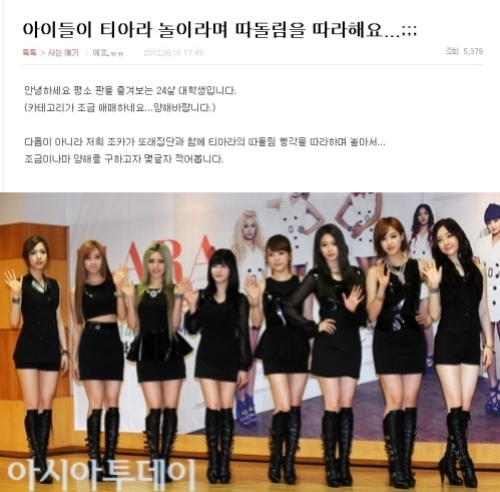 The "T-ara Game" is shocking and quickly spreading.

On the 16th, on one online community, a post was made with the title "Children are playing the 'T-ara Game' and copying their bullying."

The writer, who claims to be a normal 24-year old college student, said “My niece and her peer group are following T-ara’s bullying scandal and making a game out of it.” And explained how she came to write this post.

A few days ago, the Canadian singer-songerwriter Nelly Furtado revealed her interested in collaborating with Big Bang's T.O.P during a press conference prior to her concert in Manila, Philippines.
( Collapse )

We reported a few weeks ago that boy group INFINITE will be releasing a 3D movie of their ‘Second Invasion‘ concert, which took place on April 1st this year.

It has been announced that the movie, ‘INFINITE Concert Second Invasion Evolution The Movie 3D‘, will open in theaters on September 6th!

The 3D movie will feature the ‘Second Invasion’ encore concert, filmed with over 30 cameras to help complete the project. The encore concert was opened in April due to the success of INFINITE’s original concert, held this past February, which sold out in just 10 minutes.

Happy 6th year of being BIGBANG to
GD, Taeyang, TOP, Daesung and Seungri!
We love you! ♥

The JYJ members are currently in Los Angeles, California and it looks like they’re having some fun.

On August 18th, JYJ member Junsu uploaded the photo above via Twitter and wrote, “Woo~ Sexy“.

In the photo, two of the JYJ members are posing in a hilarious manner on the Santa Monica beach with the sun setting in the background. The JYJ members arrived in Los Angeles last week to meet and network with various music producers and also have some time off to vacation and relax.