Keum Bee-na is the first Korean practicing the traditional Indian dance Odissi. Living in the dance's remote home state of Orissa in east India since early 2005, Keum now shares her story in a recently published book.

Keum's first encounter with Indian dance was Mira Nair's 1996 film "Kama Sutra: A Tale of Love," which she saw when she was a university student. "I was mesmerized at first sight, but there was no way to find out what that dance was. I felt a strong urge to go to India no matter what," Keum recalls.

It was not easy to master. All Keum had was an image of the dance she saw in the film, and she had no idea what it was and where she could learn it. She went to India for the first time in January 2004 for five weeks. In October that year, she left to study at a Buddhist graduate school in Sri Lanka. During her six-month sojourn in Colombo, she learned that the dance she was looking for was from Orissa. She immediately packed her belongings and went there.

In February 2010, five years after she started learning Odissi, Keum's teacher allowed her to give her official debut performance there. Since then, she has been on stage almost every year in Korea, where she takes refuge from scorching heat of Orissa from April to June. She returns to India in early July.

"I plan to live in Bhubaneswar and continue to learn about the dance while touring for performances," she said. "I hope to perform in North and South America. There are so many things I want to do. I want to publish books on India and Orissa, and the Indian and Orissa languages." 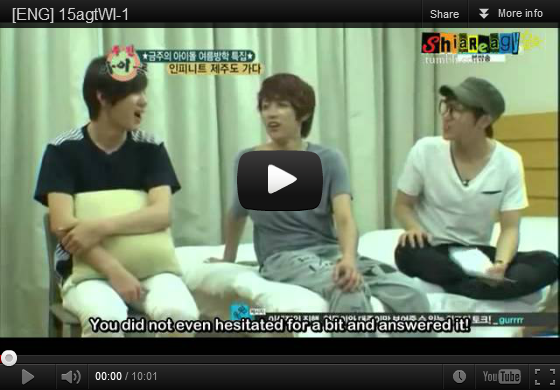 Tumblr, and the rest of the kpop related internet for that matter, is in frenzy over a picture recently posted of JYJ's Jaejoong and Super Junior's Heechul together in a car for a joyride. The origin of the photo is still unknown, however it's rumored that Heechul posted it to his Twitter account before he private/deactivated said account around his birthday. Whether that's true or not, no one knows. As for if the photo is real? That's actually pretty easy to answer with the use of some nerdy information. If you want the short answer, instead of the explanation, more than likely the photo IS real. As for when it was posted, who it was posted by, or how it was snatched, no clue.

Sauce(s): 韩网 (original poster of the photo), Destinyhae @ Sup3runior.com for reposting the photo, and my nerdy nerdy self with the use of Neal's talents, Fotoforensic's awesome web engine, and 29a.c's helpful tool.

Yes I am that nerdy, and that determined to prove Jaechul don't hate each other because of a cheap burger centuries ago, or their alleged pretty boy statuses.

Source
Brought to you by Sobuns

this went back to being strange again. and can i please get jongtae OFF my dashboard???

Another star couple has been born!

Lee Min Jung‘s agency recently made an official statement revealing that their actress and Lee Byung Hun have confirmed their relationship as a couple.

Since earlier this year, there were rumors floating around about the two celebrities and their relationship, however both sides denied the assertions. It is being said that Lee Byung Hun and Lee Min Jung developed their relationship in secrecy, however with rumors being blown up to the two getting married, the couple has decided to confirm the news!

Actress Lee Min Jung stated, “I denied the news in April because at the time I was neither ready for the public to know nor prepared for the aftermath of the news getting out. Most of all, because my parents and my agency both were unaware of the situation, I had no choice but to be even more careful.”

The timer on G-Dragon's website has now been replaced with a "COMING SOON" notice:

With the confirmation of Lee Byung Hun and Lee Min Jung's relationship last night, netizens are taking another look at the organization that spread rumors saying they were dating several months ago and trying to evaluate the truth behind some of their other rumors as well.

These are just rumors spread by the same people that predicted LBH and LMJ's relationship, so take them as what you will. When news of their relationship first broke out, nearly 90% of the best replies were talking about how they now believe in the 'Stock Market Exclusives', a gossip source for rumors on everything from the entertainment industry to the government.

Some say that it's controlled by reporters or government officials wanting to create headlines for their own benefits (hiding scandals, creating scandals, diverting attention, etc), but I don't know much more than that. Others claim it's spread by word of mouth from staff of the industry.

I do see their rumors come up in the news often but they use too much anonymity to make much use of it.

These rumors are CURRENT and mainly focused on idols. I will not go back for the old ones unless confirmed recently.

sources: nate + netizenbuzz
f(x) member Sulli has been gaining attention with her role in the SBS drama "To the Beautiful You."

f(x) member Sulli has been gaining attention with her role in the SBS drama "To the Beautiful You."

Sulli plays the role of Goo Jae Hee who is clumsy yet strong. If she sets her mind to something, she will work until she completes her goal. She is respectful to the people around her and has a sweet personality.

On the second episode, Jae Hee gets caught by Jang Min Woo (Ki Tae Young) of her disguise of being a boy, but still only worries about Kang Tae Joon (Choi Minho). Jaehee, who is attending an all boys sports high school, has to run, play soccer and other sports just like the other boys to fit in.

Sulli was able to play awkward and funny parts as well. Many are curious to see more of Sulli's acting talent throughout the drama. She was a child actor when she was young, but this is her first real project.

Internet users commented, "Her acting is so natural", "I thought she would be awkward, but she is not" and "She's pretty good."

using image hosting sites is not allowed anymore? why am I hotlinking? should I upload all images to livejournal?


They look great! Nice to see them relaxing and having fun too, though I rather wish the other girls were there as well, but the four of them are really all the song needs. And Rhythm Power oppas sound good!
I wonder where the end of the MV went? It just kind of cuts off, but this is the only version of the MV online.

Last month, Loen Entertainment revealed that they would be debuting a new six-member girl group going by the name of
FIESTAR.

The girls recently uploaded a dance practice video that has viewers amazed. In the clip, the girls take on the intense choreography of SHINee‘s “Lucifer“. With surprising agility, the FIESTAR members manage the complex moves with great synchronization.

The group consists of members Jei, Linzy, Hyemi, Yezi, Cheska, and Caou Lu. They’re of various nationalities as they’re from countries like Korea, U.S., and China. These girls are said to be skilled and thoroughly trained, having gone through an average of four years of training, and have been practicing together for two years after the formation of the group.

Check out the intense clip, do you think the girls did the song justice?

The contestant introduced himself as Roy Kim (20, real name Kim Sang Woo) and revealed himself to be a future student at Georgetown University as well as the son of a famous makgeolli (Korean rice wine) brand CEO. In addition, netizens were able to dig up more background information as it turned out that he’s also cousins with Rainbow’s Yoonhye.

A representative of DSP Media spoke with Star News on the 18th, stating, “It is true that Roy Kim andYoonhye are related. We don’t want to go into details regarding [his father's] company. Yoonhye is also reluctant to discuss her uncle.”

Dayum, he's really good IMO. Idg why Baek Jiyoung & Lee Seungchul said no. And he's a cutie, he reminds me of Song Changui. Lol at 4:18.
Collapse