Donghae wrote and composed the song. Boy should get to do more (solo work ahem ahem) tbh

I have no idea what to tag this with...

The second photograph is a close-up shot of G-Dragon’s chest but his face is left out. G-Dragon added the caption: “GQ.”

Is G-Dragon hinting at an upcoming photo spread for “GQ”?

Minors will soon be subject to costume regulations when they go on air, said the Korea Communications Standards Commission Tuesday.

The commission stated on its website that it will push for a new rule to regulate revealing clothing for teen and child performers in order to control exposure.

“Broadcasters must pay attention to and refrain from excessively exposing female minors during program recordings. Overly suggestive screen shots of girl groups composed of a large number of minors must also be banned,” said the revised bill.

The commission also decided to issue warnings or even stop a program from being aired if the broadcasters do not abide by the new revisions.

“We made the decision to go forward with the act because it has turned into a significant social issue in that such actions or scenes could damage the psychological state and characteristics of children and teenagers,” it said.

The KCSC decision is likely to trigger strong protests here and overseas from fans of the country’s many girl bands, according to industry watchers.

This is not the first time the commission acted to protect underage performers. In August of last year, the commission gave a warning to singer Hyun Ah, who was then a minor, because of the excessive sexual overtones of her dance moves.

Psy speaks at a press conference held at a hotel in Seoul on Tuesday.

Korean rapper-singer to release new single in the U.S., hold solo concert at Madison Square Garden in New York and cities around the world

Psy, the Korean rapper-singer who instantly became a global star with his mega hit single “Gangnam Style” said on Tuesday in Seoul that he still feels like he is dreaming.

“I feel like I am dreaming and I am still at a loss for words. This wasn’t something that I planned for but it just happened,” Psy told reporters at a press conference held at a hotel located in the heart of Gangnam, southern Seoul, the area of the capital featured in his single.

“I thought I was going through the peak of my life before. But now.. wow.. some impossible things have happened to me. I am so grateful for the Korean fans who supported me and accepted my healthy but unsound behavior on the stage so far,” he said.

LOL I guess Rain can now breathe a sigh of relief. 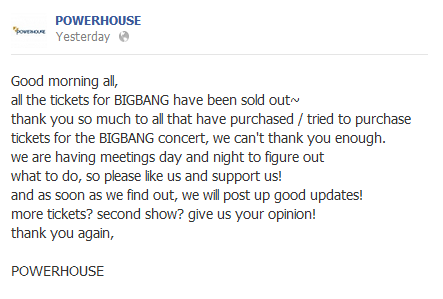 Big Bang sold out all 24,000 tickets to its U.S. concerts in less than two hours, reflecting their growing popularity around the world.

Mods: Edited the sources. This is my first post here. I hope I did well. :3


source: Samsungmarcomm
resubmitting this because of html failure on the first one, i hope this one works. sorry mods n.nv

Having already released their new album ‘Catch Me‘ as well as the music video for its title track, TVXQ has sat down to discuss some of their recent happenings as well as introduce their new release.

When asked to introduce their new album, Changmin commented, “I think it’s filled with songs that you’ll enjoy” as Yunho nodded in agreement. Yunho also revealed that Changmin tried rapping in one of the new songs and they were both surprised to hear how well it turned out.

The boys also recommended some of their favorite tracks on their new album which included “Dream“, “Destiny“, and “I Swear” (composed by Changmin to express the group’s love for their fans), and “Good Night“.

Jessica has just been selected as the official muse for banila co., a brand that sells beauty products.

On their official Facebook page, banila co. staff indicated that advertisement shootings began last Thursday on September 20th. They wrote, “Jessica must have been getting really exhausted as the recording time got longer, but she enjoyed the scene with a bright expression. She showed a ‘star’s elegance’ while carefully monitoring her own appearance!”

They further described, “Jessica, who is called an ‘Ice Princess’, melted the hearts of the entire shooting staff, not with her distinctive chic charms, but with freshness and cuteness. Jessica, who became banila co.’s new muse, has an image that is feminine even when she bounces. Doesn’t she resemble banila co. so much? Please leave a short message you want to say to Jessica and banila co., as well as a comment on which product suits Jessica the best! We will draw from the people who left a comment and send three people a special gift.”

A few days ago, Big Bang‘s T.O.P injured his hand while filming his movie ‘Alumnus‘. Due to the injury, the movie had to pause filming and T.O.P had to receive surgery. Fans were curious as to when he would could return to the set and it has been announced that he will be returning to film in the first week of October.

T.O.P was released from the hospital after his surgery on the 24th. He will be attending the Singapore stop of the ‘2012 Big Bang Alive Galazy Tour‘ on the 28th and 29th, and then return to resume filming ‘Alumnus’.

One of the staff members ‘Alumnus’ stated, “Big Bang has a concert in Singapore on the 28th. As planned, he will return to filming on Monday (October 1st) after his concert, or Tuesday (October 2nd) at the latest.”

Source: Allkpop, My Daily via Nate

On the 25th, Psy returned to Korea after spending around 3 weeks in the United States and held a press conference.

When asked to make a promise to do something if he reached 1st on Billboard‘s ‘Hot 100‘ chart, he answered, “I’m honestly anticipating it a bit. When I first got to 64th, I just laughed, cried and was happy. But now, I keep thinking, ‘maybe it really will happen?’ so I can’t make a light promise.” After a bit of thought, he continued, “If I reach #1 on Billboard, I don’t know where, but I will set up a stage where a large number of people can see. I’ll take my shirt off and sing Gangnam Style.”

In the same press conference, Psy revealed that he will be singing in Korean for his American debut album. Super Junior’s Leeteuk, 8eight’s Lee Hyun, and Mighty Mouth’s Sangchu‘s enlistment dates have all been finalized and it seems we will have to get ready to say goodbye to the three stars this October.

8eight’s Lee Hyun will be entering first as his enlistment date is on October 8th. Leeteuk and Sangchu will then enter for their basic training for five weeks on October 30th.

All three will be serving as active duty soldiers for 21 months after their basic training.

It was unclear at first if Leeteuk and Sangchu would be serving as active soldiers since they are known to have suffered from injuries. However, due to their strong determination to serve as active duty soldiers, they were eventually admitted despite their injuries.

Now that Leeteuk’s enlistment date has been confirmed for next month, his last recording dates for SBS’ Star King’ and ‘Strong Heart’ will soon be determined by the PD and staff.

Lee Hyun will also be wrapping up just in time before his enlistment with the release of a goodbye single on October 5th, while Sangchu will be putting Mighty Mouth activities on hold for a while.

edited to append the gif, finally an excuse to use this gif I made eons ago

Which old or new kpop song should get the marching band treatment next?

LOOOOL IDKIDK i love it