GLAM celebrated their 100th day since debut! The rookie girl group shared a glamorous cake sent by fans to celebrate the milestone.

GLAM posted to Twitter on the 26th, “Thank you for congratulating GLAM on our 100th day anniversary! We’ve received the congratulations and presents you all sent in! ^^ Bbyong! *_*.”

In the photo below, leader Jiyeon is holding up the congratulatory cake that reads, “Girls Be Ambitious! Celebrating GLAM’s 100th day. We will be with you always.”

the original header pic at akp was from their Men's Health photoshoot, which I'd never seen before. It was never posted here, but it's quite old so I figured I'd just link the pictures here :) 1, 2, 3, 4, 5, 6 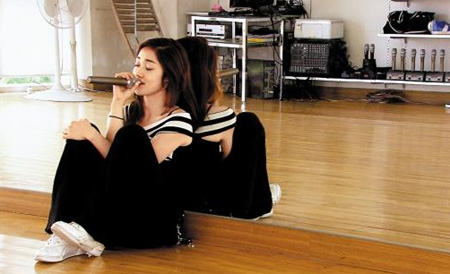 "9 Muses of Star Empire," a documentary produced by the Chosun Ilbo tracking the manufacturing of a K-pop band, has been shortlisted for an award at the 2012 International Documentary Film Festival Amsterdam.

The IDFA jury on Friday said the film is among finalists in the music documentary category. The event is considered the pinnacle of documentary festivals with a total of 3,000 films from all over the world competing for awards in various categories including feature-length, mid-length, first appearance, and music. Some 15 make it on the shortlist in each category.

The winners of the grand prize and viewers' prize are announced on Nov. 25. of girl band Nine Muses practices in a documentary that tracks the making of the group produced by the Chosun Ilbo.

"9 Muses" tracks the tough training a group of ordinary girls go through to become stars, their fierce competition, their conflicts with their managers and the problems the producers encounter.

The film took more than two years to make. It was co-produced by the Chosun Ilbo and Minch and Films of the Netherlands and shot by crew from countries including Korea, the Netherlands and Serbia. This is the first time a film by a Korean media organization has been shortlisted by the IDFA.

( Collapse )
Baby Zelo thanks you for your time

AoA turned into ‘Bond Girls’ for the VIP screening of the film ‘Skyfall‘.

The dress code for the female guests invited to the screening was centered around the theme of “Bond Girls”. The ladies of AoA were warmly welcomed by the family of the ambassadors and charge d’affaires of England, even taking commemorative photos with them.

After the event, AoA member Mina tweeted, “AoA have turned into Bond girls today >_
Others invited to the screening include Korean athletes who competed in the ’2012 London Olympics’.
( Collapse )

YESSSS. So catchy! Imo this is his best track yet!

the song should be released tomorrow~

Rookie girl group TAHITI, who made their debut with “Tonight” this past summer, is gearing up for a comeback with a new single album ‘Hasta Luego‘ on November 1st.

Today they unveiled the music video teaser for their comeback single ‘Hasta Luego’.