With the recent surfacing of a photo showing IU and Eunhyuk together that was accidentally revealed through IU’s Twitter, fans and netizens alike had been awaiting an official statement from the artists’ respective agencies.

It seems Loen Entertainment is the first to break their silence as they have just released an official statement on the issue:

Noel's been around since 2002, and Time For Love is their fifth album I believe. So maybe time for a tag please Mods? This album has 13 new songs, including a solo song for each of the four members. The entire album is gorgeous; I haven't loved an album so completely since 2AM's Saint O'Clock. My must listen songs are Like Today, all four solos and Second Chance.

For the Ha Choon Hwa special, B1A4 covered her hit song “Arirang Mokdong“. The members went for a rock and hip hop interpretation of the song, moving closer to the audience to get the crowd pumped up. Baro in particular approached Ha Choon Hwa to give her his towel.

After their performance, Ha Choon Hwa commented, “I’ve listened to your song ‘Baby Good Night‘, and I think you have a very unique music style. You sang it in your own style.”

We Got Married's Yoon Se Ah reveals : "EXO's Kai, he's the only one I look at for the first time after Jang Gook Young" 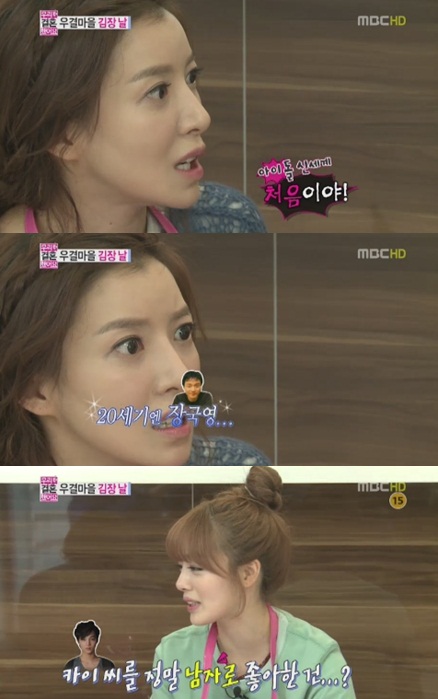 Yoon Se Ah has showed her affection for EXO-K’s Kai.

You can hear snippets of Jiyoon's compositions in this video, I can't wait to hear in full what she's been making for 4minute and herself. She says some interesting things about 4minute too.

Rookie group Cross Gene officially debuted in Japan on August 12th with the Japanese Edition of their Korean mini-album. Now the group is set to release their first original Japanese song as well as the Japanese versions of tracks from their debut mini-album.

The album, titled ‘TIMELESS-FUTURE‘, is set for release on November 21st. The mini-album will contain 7 tracks including instrumentals and original Japanese song “New Days”. It will come in two editions. The mini-album track list is provided below.