Lee Myung Han, chief producer of tvN′s The Romantic & Idol, called Fiestar′s Jei ′the next Lee Hyori′ and said MBLAQ′s Mir seemed to fit the show the most.

He first said about Fiestar′s leader Jei, "The producers all agreed that Jei is just like how the sexy queen Lee Hyori was when she was a rookie. She′s a rookie, but still she feels like a veteran. Her words and her solid heart were just like Lee Hyori′s."

Did anyone else watch the first episode of this?? I loved it, I think it's awesome that TvN didn't allow managers at all, so they got to act more like normal people around each other. I heard they are planning a season 2 already with more 2012 rookies. 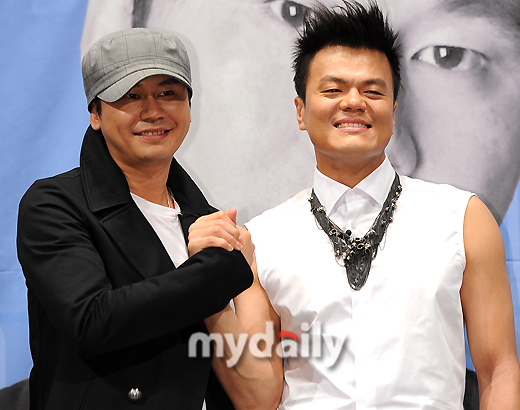 First Jonghyun and Shin Se-kyung back in 2010, then Junhyung and Goo Hara in 2011…gosh, I was getting worried that we wouldn’t fill our K-pop couple quota this year!

For a scandal that was launched by the still-photo equivalent of a sex tape, the IU-Eunhyuk Twitter scandal has been progressing in a disappointingly benign direction. Several days ago, a photo of a pajama-clad IU and a seemingly shirtless Eunhyuk was uploaded onto IU’s twitter, only to be taken down minutes later. LOEN Entertainment released a statement shortly after the scandal claiming that the photo was taken when Eunhyuk visited IU while she was sick sometime last summer. SM responded the next day with a proverbial “What they said.”

Very very interesting read imo. It's not really about IU/Eunhyuk but more about international fans' perception of Korea. It basically  addresses all the comments (including my own) I've seen reguarding this scandal as well as other issues. It's long so I tried to bold the more intersting parts but I think I kind of ended up bolding the whole thing at the end.

SNSD are back in Korea! But they have a packed schedule in Japan tomorrow.
They will appear on “Kayou Kyoku 2hr Special” at 9PM JST (Live Broadcast - TBS) and they will also attend "Playing with Girls' Generation" at Yoyogi Gymnasium at 7.30PM JST.

A photo of Park Bom in a tight one piece dress with a hot pink cape was recently uploaded online. The photo was uploaded by a fan who lived in Los Angeles, who wrote, “Park Bom filmed a music video right in front of my house. I opened the window because 2NE1-style music was playing loudly outside. I saw Park Bom with a pink cape walking back and forth to the music on the street. There were about 20 male staff members filming with her.”

Fans have been wondering if the music video was being filmed for 2NE1′s upcoming comeback. What do you think?

After revealing simple yet alluring teaser photos, SPICA has officially announced their comeback!

B2M Entertainment recently updated with the jacket photo from the group’s second mini album, ‘Lonely‘, which will be released on November 21st as reported previously.

The jacket photo showcases a feminine, yet strong image of the girls that is very different from the first batch of teaser photos revealed earlier.

The group’s new work is said to have been produced by hit team Sweetune, and the members have also included their own works as well in the album.

Not much else is known about their upcoming title track “Lonely”, except that it is a “retro-feeling sound with a sophisticated beat”.

I HAVE NO WORDS FOR THE BEAUTY OF THIS VIDEO. SO DIFFERENT FROM THEIR PREVIOUS STUFF, BUT IT'S JUST SOOO GOOD.

At the "KPOP STAR 2" press conference held in Seoul Friday, Yang confessed he still adores the former "KPOP STAR" contestants Park and Baek A-yeon, whom both has inked deals with JYP Entertainment and released their debut records a few months ago.

“I’d like to produce Park Ji-min and Baek A-yeon’s new songs, if they want it. It'll be just like how JYP Entertainment Chief Park Jin-young produced Se7en’s [YG artist] tune 'When I can’t sing' before. I’ll keep this in mind until the end of the second season when the contestants sign with other agencies,” Yang said, while sitting next to the show's two other judges, Park and SM Entertainment artist BoA.

"I still like Baek so much that I once said in an interview that I’d like to sign up for her fan club. And I still recall how it touches people’s heart when Park Ji-min sang Adele’s 'Rolling In The Deep.' From time to time I look its video up on the internet," he added.

The second installation of "KPOP STAR" will kick off its run on SBS from November 18 at 5:00 p.m. in local time.

YG is such a troll! But I'm sure he would get better results, at least with Park Ji Min than JYP with his 15& flop debut.
Collapse