1. Recently, the much-loved IU was involved in a scandal over a picture she accidentally uploaded online. Although opinions on the topic remain divided, the majority of entertainment companies have now begun to collect all of their artists' cellphones to check every picture they have saved in it. As for the opinions of industry insiders, one journalist said, "There are a lot of comments about people being disappointed in IU but barely any about Eunhyuk. I think people need to really think about whether they're enforcing their ideals of virginity on women under the guise of 'Nation's Little Sister'." IU herself is in deep shock with all of the parodies coming out on the internet, especially with some that have gone as far as to photoshop her face onto pornographic images. The majority of industry insiders feel that the private lives of stars should be left private and respected by the public. ( Collapse )

The top ten singers and singing groups of the 2012 Melon Music Awards have recently been unveiled.

The song "Fantastic Baby" played in the background of a scene while the members danced to the song. This is during the point where the members of Glee were practicing for their Regional's performance. Mike Chang, portrayed by Harry Shum Jr, claimed that Korean groups are the "tearing up the scene".
( Collapse )

Missed out on the nominees? You can check them out here and here.

EDIT: added new performances (check at bottom of the post)

I ship JB/Seungah but JB seems more like a baby to me after watching this episode. It's like he falls for any girl who's near him. :(

6. NO ADVERTISING PLEASE
- If you want to partner with us please email us at omonamods@gmail.com

HaHa and Byul finally got married on November 30th KST!

Other big stars were in attendance, such as the cast of ’Infinity Challenge‘ and the cast of ‘Running Man‘, including Yoo Jae Suk, Kang Ho Dong, Gary, Gil, Ji Suk Jin, and Noh Hong Chul. Others such as Kahi, Kim Na Young, Younha, Kim Jae Dong, attended as well. Even though the ‘Mnet Asia Music Awards 2012‘ was held on the same day in Hong Kong, 2AM‘s Seulong and Girls’ Generation‘s Taeyeon and YoonA attended the wedding as well.

Congratulations to HaHa and Byul!

Check out the photos from the wedding below!

More pictures at the source. 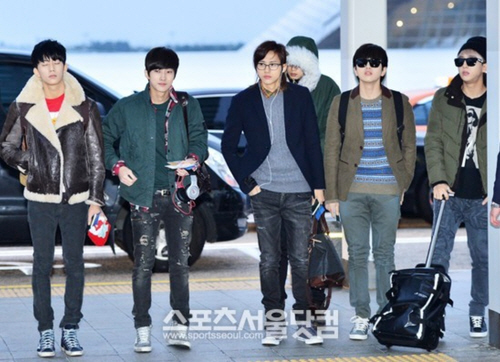 (Mods, this is my first compilation post...I sure hope it's okay because it took forever. D: I just looked at recent posts and modeled after.)

The boys aren't exactly fashion masters, but considering their performance clothes it's all good for me. I like how they're like boys next door. And they need to just go ahead and marry twitter -.-

Shinhwa will be releasing a new album on their debut date of March 24th for their 15th anniversary.

The group celebrated their 14th anniversary this year with a comeback concert where they had promised, “Next year on the same day, we’re going to release our 11th album and hold a concert at the same date.”

The group is planning to follow through on their promise, and have revealed their intentions of indeed releasing a a new album and concert. They are currently revealed to be discussing the new concept and the song flow for the new project.

Hyesung said, “The members have their own schedules, and it’s also hard to reserve the concert hall. But we will keep our promise.“