Minwoo and Hyukjin(?)'s antics on the left were cracking me up XD I have no idea what to tag this with...

For the Kim Bum Ryong special of the show, the two B1A4 members performed “The Way to Live like a Man“. Sandeul’s quiet yet emotional singing impressed the crowd in particular.

Son Ho Young, who also competed on the program, commented, “This is the best B1A4 performance I’ve seen so far. I think they’ll get 1st,” while Brown Eyed Girls’ JeA stated, “It’s like they were cast aside somewhere. They express themselves in a way that’s supposed to be difficult for young people.”

Kim Bum Ryong himself said, “You [two] are very cute, but the song is very mature. I composed ‘The Way to Live like a Man’ after watching the drama ‘Seoul’s Daughter‘, and [I feel like] the feelings during that time were brought back.”

Since there wasn't a post about this yet and I thought B1A4 bbs deserved a post for their first Immortal Song 2 win (not just winning a round but winning the entire ep!) :D The performance was great but Sandeul especially kills it after Baro finishes his rap. And everyone being so happy for them winning made me really happy.


Yunho and Changmin at their fansigns from December 6 and 8

Jjong and his lips invites you in...

I know: Already? It feels like just the other day I was killing myself to corral all my thoughts in coherent fashion in a monster review of 2011′s dramas, and already it’s time to lose sleep wrangling my thoughts together for 2012. Time sure flies when you’re having fun, or old. Guess which one I am?

These days I shy away from blanket statements like “This was an awesome year” or “This was a terrible year.” Dramaland has been putting out so much material that all the nuance gets sucked out of a flattening statement like that. If anything, 2012 was the year it overflowed with variety—so yes, there were terrible shows, and there were awesome shows, and there were shows every step in between. But thanks to the explosion of cable programming—aided by the launching of not one, not two, but four new cable stations boasting big drama lineups—there was just about something for everyone.

Open to: All, detailed results viewable to: All. Participants: 163

What did you think of dramaland this year?

My favourite by far this year (and one of my favourite period) was Arang. What about you guys? 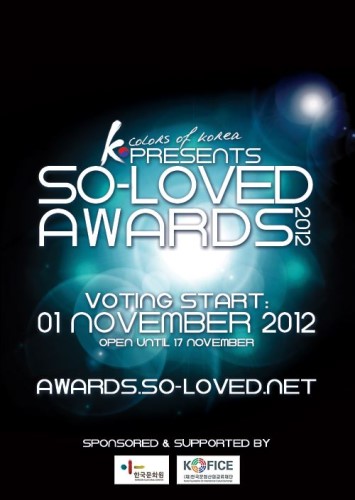 Do you remember this kpop award from germany ? No ?
The results are out!

Congratulations to the winners!