HyunA has released the ‘Round 2′ CF for ‘Chum-Churum‘ (‘Like the First Time’) soju.

Her ‘Round 1′ CF has reached over 520,000 views, and Round 2 that was revealed yesterday has already garnered nearly 50,000 views. She has more views on her ‘Round 1′ CF than both Hara and Hyorin‘s ‘Round 1′ combined, proving her place as the sexy queen.

Rookie group C-REAL teased their fans with a new, mysterious image that may reference a potential comeback.

NAP Entertainment posted the above picture to their Twitter account earlier today, with the mysterious caption, “씨리얼 (C-REAL) … 레니 (Lenny) … ?”

The photo shows C-REAL member Lenny on one corner of the image, leaving a lot of white space for what many fans assume to be the spaces for the pictures of the rest of the members.

What do you think it could be about?

Despite receiving a substantial amount of negative press for his past anti-American lyrics, earlier today Psy attended the annual ‘Christmas in Washington 2012‘ presentation at the National Building Museum in Washington.

Psy closed out the show with a rousing rendition of “Gangnam Style“. He was also able to shake hands with President Obama. There is no word on whether he got his chance to teach the ‘horse dance’ directly to the President though.
( Collapse )

B.A.P, Psy, Lee Byung Hun, and Super Junior‘s Siwon will be featured in a Discovery Channel documentary on Korea, which will air on December 15th and 16th.

B.A.P’s agency TS Entertainment revealed that throughout the two days it airs, the documentary will be played in 34 countries and around 185,000,000 households, introducing Korea to viewers. The ‘Finding Hallyuwood‘ segment belongs to a series of 5 documentaries called ‘Korea Next‘, including 30-minute segments on K-pop, nature, traditional culture, religion, and the IT (information technology) industry.
( Collapse )
Allkpop

On Friday, YouTube sensation Psy, otherwise known as Park Jae-Sang, made headlines when it was revealed that the "Gangnam Style" star sanglyrics from South Korean rock band N.E.X.T.'s song "Dear American", including: "Kill those f---ing Yankees who have been torturing Iraqi captives" and "Kill them all slowly and painfully."

BoA’s anticipated single will be titled “Only One” and is slated for release on February 20th. It will include the Japanese version of “Only One” and “The Shadow“, which were included in her latest Korean album, “Only One”. Both songs are written and composed by BoA herself.
Check out the track list below!
===
<CD+DVD>

(Total of 4 versions for the 2 songs)

(Total of 4 versions for the 2 songs)

On December 11th at around 2:00 am KST, the van that the ladies were traveling in was going down the Olympic Highway from Seoul to Jamsil when it hit the side guardrail and flipped over.

Member Hyosung was seriously injured and was immediately taken to the hospital. The other members are also being treated for minor injuries at the hospital. It is unknown at this point what their exact injuries are.

The police is currently investigating the accident through witnesses.

UPDATE: YTN News is reporting that it was Zinger that was seriously injured and broke her ribs. This article also states the van broke through the guard rail and fell into a ditch below.

( Collapse )
UPDATE 2: The girls were traveling to Jamshil and the van they were in hit an icy patch and slipped on a curvy road, slamming into the right guard rail and flipped over. All the members were moved immediately to the emergency room at a nearby hospital. Unlike the previous report that stated Hyosung was severely injured, it was Zinger who suffered the worst injuries with fractured ribs and a bruised lung. The rest of the members and the manager who was driving suffered light injuries and bruises, and were released from the hospital.

I am seriously freaking out. I hope they were wearing seatbelts. ;_____;

There’s more trouble afoot in dramaland, with SBS’s historical drama The Great Seer being forced to shut down production on Saturday, December 8, when its cast refused to continue shooting.

The chair of the Korea Broadcast Actors Union issued a statement explaining that the drama, which began airing in October, has failed to pay a penny to its actors in the two months that it has been running. Until the production rectifies the situation, it stated that the actors will not film. Currently the drama has broadcast through Episode 18 of its scheduled 36.

Most of the cast of the show belongs to the union, including Ji Sung, Ji Jin-hee, Lee Yoon-ji, and Song Chang-eui. The union stated that the producers have been beset with serious problems and have ignored the repeated requests for payment, being too preoccupied with keeping itself afloat. The issue had also been raised with SBS, and the union had stated their stance on walking out last month, and threatened to boycott all outside productions in the future, given the constant recurrence of these issues in drama after drama (Faith was another recent example).

A rep with SBS stated that the three parties — outside production company, SBS, and the union — are engaged in deep negotiations and that this issue won’t affect its broadcast schedule.

Of course, they would say that, since nobody wants to entertain the idea of having no material to broadcast when Wednesday night rolls around. It’s looking very tight for the production, since they will have to scramble to make their December 12 and 13 episodes.

( Collapse )Source: Dramabeans via Osen, TV Report
Mods I don't get the problem with the pictures. I've used photobucket in all my posts and Javabeans' for the previous drama ones that were accepted. 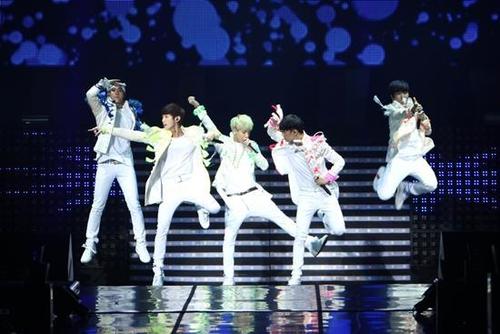 B1A4, the definition of an evolved Idol

Now, idols who are busy lip syncing to the songs composed for them by another musicians and dancing to their choreography don’t exist. Passionately singing and ad-libbing to their self composed songs and great rapping skill. They even calmly handle unexpected situations and warmly hugged their fans. It was B1A4 who showed the definition of an evolved idol group.
On 8th this month at the Seoul Olympic SK Handball Stadium, group B1A4 (Jinyoung, Baro, Sandeul, CNU, Gongchan)’s first exclusive concert “BABA B1A4” was held. Total of 11,000 tickets were sold out for their 2 day concert from 8th to 9th and proved the super rookie B1A4’s influence.
B1A4 performed “Tried to Walk”, “Beautiful Target”, “Sleep well, good night”, “Baby I’m Sorry”, including their unreleased tracks “I’m burning” and “”Would you like to sing together?” and more, selecting 24 tracks in total and created a splendid 180 minute stage. B1A4 who opened their exclusive concert after debuting for about 500 days started off the show with group stages completed by their teamwork and arranged solo stage moments to show off their own different charms.
( Collapse )

B1A4 grabs the title, “Next generation Performance-dol” with their first concert 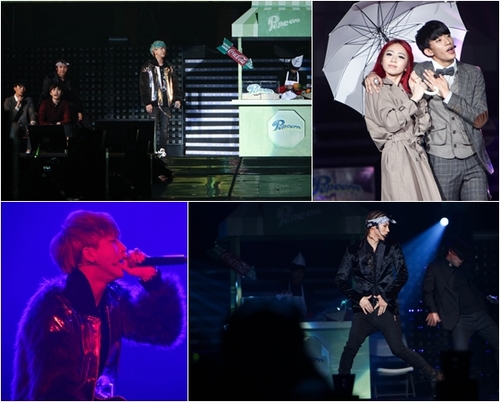 Here are some pictures of B1A4 crossdressing
( Collapse )

The concert really was excellent. WM Entertainment continues to be really smart in how they handle B1A4: the venue was small but decent to hold the 5000+ people, costumes and sets were minimal but not bad at all. Their profit margin had to be pretty good--and they could have made more on merchandise, which was desperately understocked. Both times the line had at least a thousand people; I came on the second day two hours before they opened sales, was several hundred people back in line. They sold out of hoodies in 10 minutes. There was also remarkably little gaffes for a first concert, audio and everything was great. Some organizational problems at the beginning, but that's Korea for you. It was a great show, and I would gladly go again! If you have questions, feel free to ask. ^^

....Then I met Dan. He was like many of the other Korean kids who had moved around the world their entire lives -- Switzerland, Canada, Hong Kong. But in a school where I threw myself into the role of the weird theater-creative writer guy, I saw him as different. Scrawny and zit-faced, obsessed with the character “Armand” from Anne Rice novels, Dan wrote clever short stories about rebel youth who cheated the system, sometimes caught sometimes not. These stories resembled his own constant run-ins with school authorities. Among fellow juniors, Dan was the court jester whose constant stream of wisecracks often made him the center of attention. I can still remember his laughter careening like shotgun blasts from the back of the school bus where I sat alone, sometimes next to his shy cousin Sam. With me, though, Dan was deferential. He dutifully fulfilled his role as my apprentice, acceding to my re-imagining of our school’s literary magazine Kaleidoscope. I appreciated Dan. I felt like he was the closest thing to a kindred spirit in a school, in a country where I didn't feel like kindred. I saw him as my protégé.  At the same time, I was a little jealous of him -- the ease in which he switched between English and Korean, the ease in which he laughed with the foreigner kids and the Korean kids. And then I found out that he wrote a song  for some Korean rock singer named Kim Gun Mo who, as it turns out, is famous. I knew Dan was a good writer, but I didn’t think he was that good. It was like Dan had a foot in the black limo that I could only gaze at, without comprehension.

BoA is set to hold a solo concert in South Korea. On December 11th, it was confirmed that BoA will hold the concert titled "BoA Special Live 2013~ Here I Am" on January 26th at the Olympic Hall.

The concert is expected to showcase a new mature blend to the singer's passionate and charismatic stage presence, as well as a huge turnout from her local and international fans.

Despite having numerous arena tours in Japan, this will be the first time that BoA will hold a concert in South Korea and is already receiving huge expectations. Tickets for her concert are set to go on sale on December 20th.

Meanwhile, aside from preparing for her concert, BoA is back as one of the judges for SBS "K-Pop Star Season 2."

Hara has released the ‘Round 2‘ CF for ‘Chum-Churum‘ (‘Like the First Time’) soju.

I haven't been able to find the name of the song :-(

Sunny Hill shared a teaser image via their official Facebook page, along with the words "The times back then that feel just like yesterday", followed by the mini-album's upcoming release date. No other information aside from the album release date and teaser image has been released.

After halting promotions in April, Sunny Hill are finally coming back to the music scene with "Goodbye to Romance"

Are you looking forward to Sunny Hill's comeback?