Recall that Choi Jin Shil committed suicide in October 2008, and her brother also did the same in May 2010. The tragedy is followed by yet another suicide. Jo Sung Min was found hanged in his girlfriend’s apartment. Though the police are still investigating the matter, as of now, it seems Choi Jin Shil’s children have lost another dear one to suicide.

Jo Sung Min had long suffered from hate comments ever since his wife’s death. Not only that, he used to be an excellent baseball player, but suffered various problems through injury. Many pitied his life, but also lamented for the two children he left behind.

Just a few days ago, the children Hwanhee and Junhee had thanked comedian Lee Young Ja for taking good care of them, showing bright smiles on screen.

Our hearts go out to Hwanhee and Junhee, and everyone else who were affected by this devastating news.

Actor Ji Hyun Woo, who’s currently serving in the military, revealed that he and his girlfriend, actress Yoo In Na, are still happily in love.

The January 4th broadcast of MBC‘s ‘Section TV‘ aired an interview segment featuring the cast members from the military musical, ‘The Promise‘.

When Ji Hyun Woo was asked whether he still keeps in touch with Yoo In Na, the actor answered with a smile, “There has never been a time when Yoo In Na missed my call. We frequently contact each other.”

Back in June 2012, Yoo In Na admitted that she was dating Ji Hyun Woo. The two stars met on the set of tvN‘s ‘Queen Inhyun’s Man‘ and their relationship made headlines after Ji Hyun Woo made a surprise confession during a fan meeting for the drama.

In related news, the military musical ‘The Promise’ celebrates the 60th anniversary of the Korean War. The musical is scheduled to open in January of 2013 at the National Theater of Korea.

It’s nice to hear some adorably sweet news like this in the midst of all these scandals.

I'm happy they are making it work <3

One Japanese entertainment outlet is receiving heavy attention after publishing a prediction that Korea’s Hallyu wave would end in spring of 2013.

In it, the article wrote, “In 2012, aside from AKB48 and Johnny’s, there was a lot of dark news. In 2013 will we be able to receive some brighter news,” as it delved into an analysis of the current state of Japanese music.

It then went on to say, “Japanese music industry insiders are predicting K-Pop’s boom will soon come to an end” and quoted one Japanese record agency as saying, “Some said it was strange that K-Pop singers didn’t appear at the year-end NHK ‘Red White Song Battle’, but since its peak in 2011, K-Pop’s profits and value have been plummeting.”

The article also wrote, “T-ara, IU and other female artists are still being generally well-received but male stars have already passed [in popularity]. In particular, since SM Entertainment and JYJ ended their contract dispute, it’s become less likely the original five members of DBSK will stand on stage together again. It seems K-Pop’s center has now collapsed. Already we’re seeing fewer number of [K-pop] groups making a debut [in Japan] and it’s likely each group will now quietly attract fans.”

On the other hand, the article predicted a rosy outlook for J-Pop saying, “Though the departure of a few members from AKB48 has affected its popularity, the support and numbers at its concert has been increasing. With its unit groups, [AKB48] is continuing to attract new fans. Its popularity is likely to continue.”

ID MYO dancer said the shirts were gifts from the staff during JYJ’s South America Tour in March 2012.
Front says JYJ & back has their faces. And since there are shots from the back, we will be able to see JYJ’s faces on Infinite Challenge
[Screencaps]

Critic's Notebook: In this age of short attention spans comes 'I Got a Boy' by Girls' Generation, a gleefully chaotic song that says much about pop music's trajectory.

The new single by South Korean pop group Girls' Generation is called "I Got a Boy," and if the song and its accompanying music video are a signal about pop's direction in the year to come, we better buckle our seat belts.

Clocking in at 41/2 minutes, "I Got a Boy" travels in so many directions that it feels like a scattering of musical miniatures cleverly puzzled together by M.C. Escher. As seen in the equally tripped out video, the nine women who are Girls' Generation have delivered something as wonderfully weird as their outfits — skimpy, multi-colored and mismatched — and as strange and structurally progressive as anything in the current commercial pop realm.
( Collapse )

eishastan for sharing the link to the article.

so anyone want to talk about the azealia banks/angel haze beef?

Looks like all those shout-outs to YG Family are paying off for Jay Park as G-Dragon recently uploaded a photo with none other than talented soloist.

Keeping it simple, G-Dragon posted the above photo with the caption, “with @JAYBUMAOM“. Of course VIPs and Jaywalkers alike were delighted to see the two multi-tainers together. The pair looked quite chummy with G-Dragon’s arm casually over Jay’s shoulder.
( Collapse )

infinite feels for these girls

GOD IS BACK! (...my sister pressured me into writing this

This is mostly videos of Heechul texting tbh lma 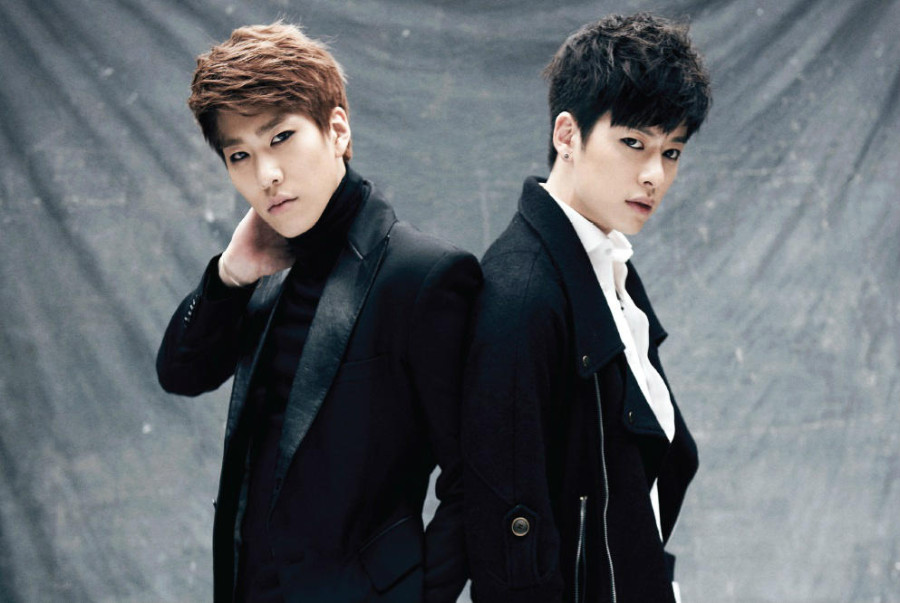 anytime mods! click the pics for bigger sizes, why do i keep seeing nichkhun and junho..

So excited for their comeback. Dorks. Love Donghae's preciousness over Mimi's Mandorian? Koreandarin?
Also mods/admins, may we please have tags for Zhoumi and Henry? Please and thank you!! And if you see this post twice, my apologies, LJ is wonky for me right now :/

Rooker singer Youai has just released her new digital single titled “I Got A Boy“, not to be confused in any way by that OTHER song of the same name.

Youai’s song has an upbeat vibe with disco elements. The song will showcase her sexiness and is expected to impress with great live performances.

However, “I Got A Boy” distinct enough to distinguish itself amongst all the other heavy hitters promoting (or expected to promote) right now?

Listen to the track and let us know.

welp, at least she isn't sharing her boy with 8 other girls

Pianist Yiruma worked with Baek on her new EP and also appeared in a music video and on several TV programs, where he gave performances with her.

“Hate” is an emotional ballad that nicely shows off Baek’s appealing voice and powerful vocal skills in her typical ballad style.

Baek will hold a solo concert on February 16 at the Jamsil Arena in Seoul under the title “An Outing After Seven Years.”

Ji Young and Seung Gi have been killing it on charts! Is this the comeback of ballads, or the downfall of idols?

Moon Hee Jun of the original boy band H.O.T is making a return as a singer with the release of his latest digital single, “Scandal”!

On January 4th, Moon Hee Jun released new single “Scandal”, nearly four years after his last release. The singer, who has been devoting himself to hosting TV shows, will be embarking on a solo music career once again with a melancholic ballad track.

I'm not sure if the video is the official MV or if it's an extended teaser? It's labeled "MV" though.

So Yi Hyun and Yuri were seen wearing the same coat.

So Yi Hyun wore the coat on the 4th episode of SBS "Cheongdamdong Alice" and wore it in a classy way.

First post on Omona. Hope I did everything correctly!
Looove this song but why is it like Minkyung ft. 3 rappers with backup dancers? :(